White Sox OF Alex Rios claimed on waivers by Rangers

Chicago was unable to move the veteran outfielder at the deadline, but may have an opportunity to deal him now.

Share All sharing options for: White Sox OF Alex Rios claimed on waivers by Rangers

Rios was a hot commodity at the trade deadline but Chicago was unable to strike a deal with any interested clubs. Now, the Rangers have gone all-in on the veteran outfielder and it's up to the White Sox to decide -- in the next 48 hours -- whether to go through with a trade or pull him back off the wire. 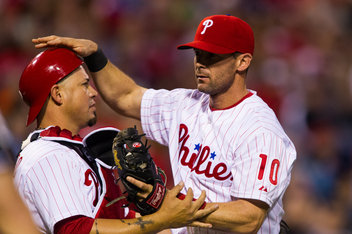 Philadelphia got the veteran through the waiver wire, but still have to clear the hurdle of Young's no-trade clause if they want to move him.

The Texas Rangers recently lost right fielder -- and impending free agent -- Nelson Cruz for the rest of the regular season because of his ties to Biogenesis, so Rios would fill an obvious need.

Rios is owed $12.5 million next season, and also holds a $13.5 million team option for 2015. However, a stipulation in his contract dictates that both of those numbers increase by $500,000 if he is traded, meaning the salaries would bump up to $13 million and $14 million, respectively, and his buyout for 2015 would increase from $1 million to $2 million. (The salary bump did not kick in when he went from the Jays to the White Sox because he was claimed straight up, not traded.)

Because the non-waiver deadline has come and gone, anyone from the mystery team that the White Sox want included in a potential trade must be either not be on the 40-man roster, have already cleared waivers, or be a player to be named later. Additionally, when a player is traded on waivers, the claiming team typically picks up the entirety of the acquired player's remaining salary. Whether the ChiSox would be able to send salary relief at some point in the future is a little unclear.

Rios, 32, is batting .277/.328/.421 with 12 home runs in 109 games so far this season. While his numbers are down from a year ago, he should provide solid right-handed bat for a Texas team looking for an upgrade in the outfield corners.

• Spencer Hall: A-Rod should be allowed to take all the drugs

• How much would you give CC Sabathia now?