Biogenesis suspensions barely slow the Rangers, as they find a replacement for their departed right fielder in Alex Rios.

Hitting has not been a strong suit of this year's Rangers, and losing Nelson Cruz to a 50-game suspension for his affiliation with the Biogenesis anti-aging clinic did nothing to improve on that. Texas has found an outfielder to fill the void left behind by Cruz, though, by acquiring Alex Rios from the White Sox after claiming him on waivers on Thursday in exchange for a player to be named later or cash.

Rios isn't exactly a slugger, but no one the Rangers had in line to replace Cruz fits that bill, either. Rios is a known quantity who has been exactly average at the plate in 2013 -- albeit below the more exacting requirements of right field -- who is also capable of contributing with his glove. He's under contract not just for this season but also 2014, and has a club option for 2015 attached as well -- if the Rangers decide they want Rios to be not just their short-term replacement for Cruz, but the long-term answer as well, then some of their Christmas shopping has already been completed. He's not that expensive at $13 million in 2014 and $14 million for 2015, both of which will likely be below the qualifying offer threshold for free agent compensation contracts.

Speaking of the qualifier, Rios' presence on the Rangers' roster might lessen the chances that free agent Nelson Cruz accepts a qualifying offer from the Rangers, leaving them potentially more open to offering one and securing the compensatory draft pick it grants when he signs elsewhere. This is no guarantee, of course, but it might be just the roadblock the Rangers need to realize the extra draft pick. 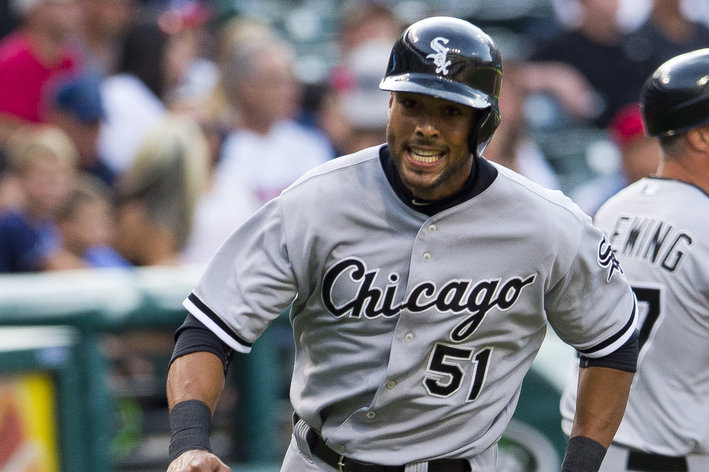 Texas will send a player to be named later or cash to Chicago in return for Rios.

While Rios doesn't kill righties by any means, he's better against righties than your typical right-handed bat, posting a 109 OPS+ against them in 2013. That's better than what the Rangers' righties as a whole have managed.

Despite the fact that US Cellular is a park that boosts right-handed power, Rios has had little luck there this season, batting just .263/.309/.380 with six homers in 52 games. He's had far more luck on the road, batting an impressive .289/.344/.458 with 16 doubles, a pair of triples, and six long balls in 57 contests. Arlington is actually a worse venue for right-handed homers than the Cell, but it also boosts doubles and triples, which are more up Rios' alley, anyway, and the end result in terms of run-boosting is essentially equal to Chicago's stadium. If switching home parks brings his overall line up, then the Rangers did even better for themselves than it would appear at first blush, especially since he's not going to be in town as a rental. That's not exactly far-fetched, either: Rios had a 125 OPS+ as recently as 2012, and while he's been up and down in his career, the high points tend to be legitimately high.

Rios isn't Cruz, but if his home numbers can rebound, he'll certainly do the trick, and the fact he can play quality defense makes up for some of the difference in hitting. It's hard to do much better than this with an August waiver trade, but the Rangers managed to reload in the present while making their short-term future that much easier as well.

• Waiting for an Alex Rios waiver trade, or lack thereof