Derek Jeter is out for at least a few days and has played in just 17 games this season, leading the Yankees to look for an upgrade on the bench at shortstop.

Share All sharing options for: Yankees acquire Brendan Ryan from Mariners for PTBNL

The New York Yankees and Seattle Mariners have completed a rare late-season trade as the Mariners are set to send shortstop Brendan Ryan to New York in exchange for a player to be named later, both teams announced on Tuesday.

Ryan has started 79 games at shortstop for the Mariners in 2013, a year removed from being the full-time starter at the position. Known as an excellent defensive player, Ryan is not a great hitter. He has just a .520 OPS on the season and has a career .238/.300/.320 batting line.

Yankees not ready to shut down Jeter for season 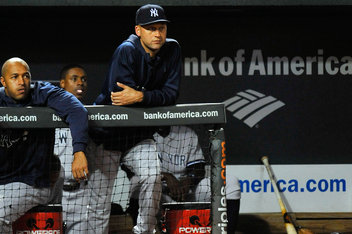 The Yankees needed insurance at shortstop with Derek Jeter's health in question. Jeter has played in just 17 games this season after undergoing offseason surgery to repair a fractured ankle. Jeter is currently out for at least a few days once again, and New York cannot rely on him to be healthy through September at this point.

Ryan will not be eligible to play in the postseason because he was not on the roster as of Aug. 31. However, he could be important to the Yankees' hopes of making the playoffs, as they sit two games behind the Rays for the second AL Wild Card.

Eduardo Nunez has been the only other shortstop on the roster, but given his questionable defense and poor hitting it makes sense that the Yankees were looking for an upgrade at the position.

Given the short amount of time that remains in the season and the fact that Ryan is a free agent at the end of the year, the PTBNL is unlikely to be anyone of much significance.

• Suspended Peralta to work out with Tigers