The Cubs are rebuilding from within, but a few key pieces aren't progressing as hoped.

Share All sharing options for: Rizzo, Castro, and the faltering Cubs youth movement

We knew going into this season that it was going to be rough for the Chicago Cubs. With a long-neglected farm system with no prospects close to the majors, Dale Sveum, Jed Hoyer, and Theo Epstein would make do with stopgap players and a of couple free agent starters to power through the year. The trading deadline saw those stopgaps (Matt Garza, Alfonso Soriano, David DeJesus, Scott Feldman, Carlos Marmol, and Scott Hairston) shipped off to contenders, and the bottom fell out of a team that wasn't much to look at to begin with: owners of a 49-58 record on August 1, the Cubs have gone 16-35 since.

The biggest disappoints, by far, have been the pair of young hitters North Siders had been counting on as the foundation for the next good Cubs team: Anthony Rizzo and Starlin Castro. As fans have begun to think about 2014 and beyond, they've understandably begun to wonder what's wrong with them and whether they can actually be fixed.

How bad have they been? I'm so glad I pretended you asked. Here are a few fun facts, if you're not a Cubs fan (for whom they are in no way "fun"):

-As of yesterday, Starlin Castro leads the National League in outs with 524. That's 40 outs more than anybody else. As in, he has about a game-and-a-half more outs than any other player in his league.

-The National League average per 600 plate appearances is 429 outs. Starlin Castro passed that on September 2, and has hit .244/.284/.344 since. He has made almost 3.5 games worth of outs more than the average National Leaguer.

Are the Reds and Pirates actually in the playoffs? 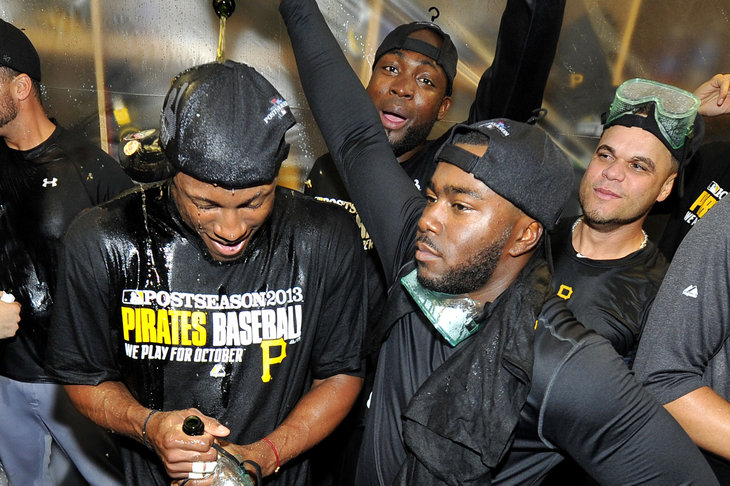 Are wild card winners really in the playoffs?

-This is nothing new. Castro has led the National League in outs made for each of the three seasons.

-Rizzo is fifth in the NL in outs (476), and could still easily pass Brandon Phillips (477) and Andrelton Simmons (478) for the number three spot before the year is done.

-Together, Rizzo and Castro have combined to make 23 percent of the Cubs' outs in 2013. If you take out the pitchers, that pushes them to almost 25 percent.

Now, on the one hand, that may not sound so bad until you realize that these are supposed to be the Cubs' two best players, and the Cubs also have had out machines Nate Schierholtz (.301 OBP), Darwin Barney (.270), and Soriano (.287) vying for the lion's share of a largely stable pool of available outs.

It's gotten even worse as 2013 has progressed. Castro has somehow hit for less power since the All-Star break (.323 SLG) and Rizzo has seen his OPS drop every month:

So what's wrong, and are they salvageable? Rizzo, in particular, gives me hope. While the results have been disappointing, almost all of his indicators are actually better this year than last. His strikeout to walk ratio is way down, and despite hitting a lot of line drives, his batting average on balls in play is just .255, and a higher percentage of his plate appearances are ending in extra base hits. The biggest problem with his game is his complete inability to hit left-handed pitching, against which he's only at .184/.280/.341 on the year. If the Cubs can provide him with some right-handed protection in the lineup, to discourage opponents from deploying a lefty reliever at the end of games, that will also help his numbers to bounce back.

Castro is a different story, however. His batting average, on-base percentage, and slugging percentage have been in freefall since 2011, and he's gone from an asset on the bases to a liability. Worse, his underlying numbers are even more alarming. In 2013, he has the third highest K/BB ratio in the National League. Al Yellon, of Bleed Cubbie Blue, suggests that the Cubs just need to leave him alone, saying

It strikes me that Starlin Castro is exactly like Jeff Francoeur, at least in that one sort of talent. He's got muscle memory and pitch recognition that allowed him to become a .300 hitter in the big leagues at age 20, and do it for well over one thousand at-bats.

Now -- two years later, and another nearly thousand at-bats later -- Theo & Co. want to turn Castro into an on-base machine? After 2,000 major-league at-bats for Castro, I submit that, as for Francoeur, it simply ain't gonna work.

What's wrong with having a slashing line-drive .300 hitter whose on-base percentage is above .340, and who hits for a little bit of power (.422 SLG over those first two years)? Not everyone can sit and take pitch after pitch after pitch. Some hitters just aren't wired that way. To me, it appears that Starlin Castro is one of those hitters.

So just make Castro stop thinking, and he'll go back to being what he was? Like Al, I'm no hitting coach, but that strikes me as unlikely, especially as he ages and his reaction times slow. Franceour essentially stopped being a major-league caliber hitter at 24 because he couldn't make the adjustments he needed to compensate for the league catching up to him. Guess what age Castro is next year? Plus, we've become incredibly aware of what happens when Starlin Castro stops thinking about what he's doing. He loses track of the number of outs, or lets a line drive slip right past his glove, or doesn't run out ground balls.

Indeed, his continued problems on and off the field with his attitude and concentration suggest that he's not just bad, but either incapable of or unwilling to get better. With Javier Baez nipping at his heals (Baez, just 20, hit .294/.346/.638 at Double-A Tennessee in the second half of 2013), Castro will presumably get just one last shot in the first months of 2014 before he's moved off of the position, maybe traded if there's interest, and perhaps onto the bench, where he'll be the most expensive utility man in the game through 2019. Wherever he winds up for the next six years, I think the old Starlin Castro is long gone.