Even with Kershaw, Masahiro Tanaka makes sense for Dodgers

Share All sharing options for: Even with Kershaw, Masahiro Tanaka makes sense for Dodgers

For most teams, signing Clayton Kershaw to a record-setting contract would likely signal the end of any major pitching moves. The Dodgers, though, are not most teams, and it has already been made clear that they intend to continue their chase for Japanese ace Masahiro Tanaka even with Kershaw in tow for the next seven years.

Why would they even need Tanaka, though, especially now that it's clear that they won't lose Kershaw at least until his opt-out clause comes up in five years? The simple answer, one with at least a hint of truth to it, is something along the lines of "Because they can," but that can't be the only reason they would invest in another deal that could very well end up looking like that of another pitcher on the team, Zack Greinke, who is in season two of a six-year, $147 million contract. There are more legitimate reasons than showing off that have the Dodgers seeking Tanaka.

For one, pitching is very expensive. The Dodgers, with their actions over the past two winters, have done a solid job of reminding us all of this by committing 13 years and $362 million to Greinke and Kershaw. The Dodgers don't mind spending, so they seem to figure they might as well get the most for their dollar. With that in mind, they don't want to bother giving up a draft pick and, say, $80 million to sign Ervin Santana, or spend $50 million to retain Ricky Nolasco. If they're going to spend, they're going to get the best of the best, and guys like Greinke, Kershaw, and Tanaka fit that bill. It's worth pointing out, too, that none of those three cost or will cost the Dodgers a compensatory draft pick: Greinke was traded mid-season in 2012, making him ineligible or the qualifying offer, while Kershaw was already on the Dodgers. Tanaka, as a posted player from the Nippon Professional Baseball league, is not subject to qualifying offer rules, and therefore only costs money -- the thing the Dodgers have proven they have little problem parting with.

This might seem like a coincidence, but it is a plan by the Dodgers to ensure that they create a pipeline of inexpensive, team-controlled talent to complement their rich core. Signing starting pitcher Hyun-Jin Ryu out of Korea was another piece of that puzzle, as all he cost, like Tanaka, was money. If you're about to counter by mentioning that the Dodgers were in on David Price not all that long ago, it's worth pointing out that it was the Rays, not the Dodgers, who initiated those conversations: Tampa Bay wanted the prospects that the Dodgers have already collected in exchange for Price, a pitcher they will not be able to retain once he hits free agency. It's a credit to the Dodgers that they've already rebuilt the farm to the point where the Rays wanted to confiscate it, and that they refused to move those pieces and instead are looking elsewhere for their fifth of five starters. 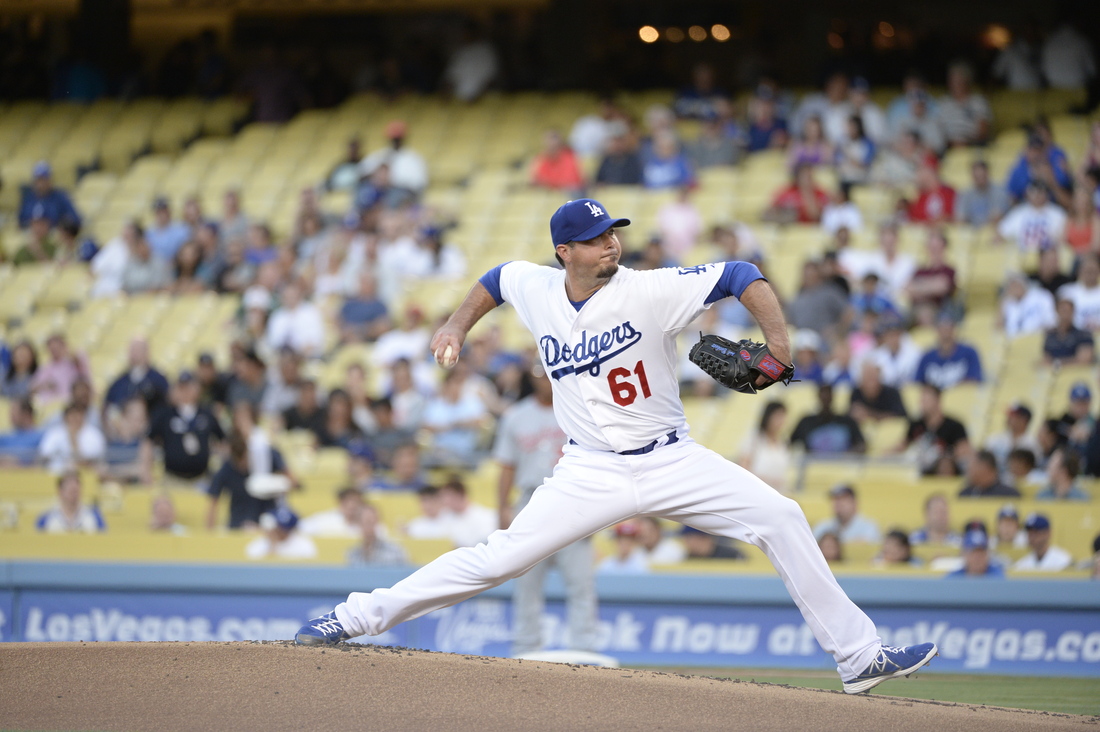 Who knows what the Dodgers can expect from Josh Beckett in 2014? Photo credit: USA TODAY Sports

It's also not as if the Dodgers lack space for Tanaka. Right now, their fifth starter is a mix of Josh Beckett and Chad Billingsley. Billingsley had Tommy John surgery after throwing all of two innings in 2013, and he should be ready fairly early this season, but whether that's a positive or not is up for debate. Billingsley was a better pitcher earlier in his career, but from 2009 through 2012, his ERA+ was exactly 100, and he averaged 181 innings per season. That's a good pitcher, there is no arguing that, but he's up-and-down and absolutely replaceable if the Dodgers can get someone like Tanaka to do the replacing.

Kershaw is exactly the kind of pitcher who is the best bet for a superexpensivelong contract.

Then there is Beckett, who pitched well for the Dodgers after coming over in 2012's Nick Punto trade with the Red Sox, but but threw all of 43 innings in 2013 before his season ended with thoracic outlet surgery. Like Billingsley, Beckett might be more name than production at this stage of his career, as he has all of one productive season in his last four, and will be 34 years old in 2014. In addition, both Billingsley and Beckett are free agents following this season, meaning Tanaka would be both a short- and long-term replacement, and the Dodgers could set themselves up to either have starting pitching depth or make a trade with a team who does not get Tanaka. Either way, the Dodgers improve their pitching, which should be impossible given their current rotation, but as you can see, is not.

Tanaka fits the Dodgers two-part plan in which they spend everything that needs to be spent while they rebuild the farm system. All he costs is money, much like Kershaw and Greinke, and that's something the Dodgers have plenty of, and, more importantly, don't mind parting with. He makes more sense in this plan than David Price would, and while the Dodgers might not ultimately ink Tanaka, they have an opportunity to try. It's a good time to be a Dodgers' fan if they are truly intent on both responsibility on the farm and pumping dollars into the major-league product, and even if Tanaka doesn't end up in Dodger blue, at least you know Kershaw isn't going anywhere.

• Microbaseball: The art of the 2-sentence baseball story

• Brisbee: The 5 creepiest mascots (and the nature of pants)