Diaz was punished for falsifying his birthdate on records, but will once again be eligible to sign soon.

Share All sharing options for: Aledmys Diaz rumors: Cuban SS will soon be eligible to sign with MLB team

Cuban shortstop Aledmys Diaz is planning on having two showcases for teams in February in hopes that he will earn a contract with a Major League Baseball club, reports Jesse Sanchez of MLB.com. He will have one showcase apiece in Arizona and Florida, where teams will be holding spring training.

Diaz, 23, is currently still ineligible to sign with a team after giving a false birthdate on the paperwork he originally filed with MLB. He stated that he had been born on Jan. 8, 1990, which would have made him exempt from signing under international guidelines written into the most recent collective bargaining agreement. In reality, he appears to have been born seven months later on Aug. 1, 1990, though there are several different records for him. 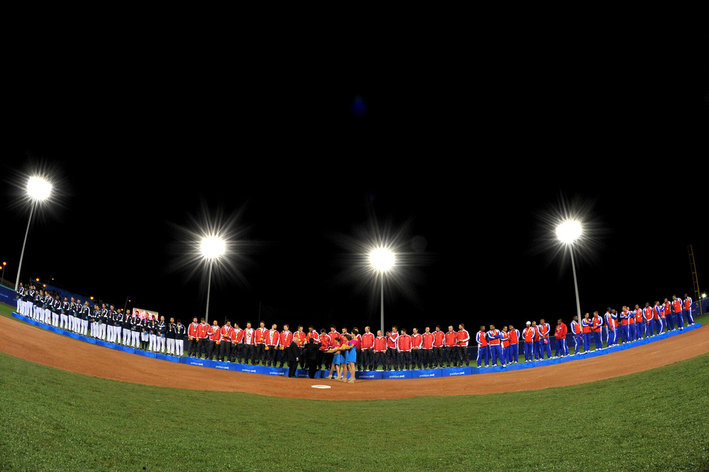 Last year, Amazin' Avenue took an in-depth look at Aledmys Diaz and how he projects in MLB.

The incentive for Diaz to lie about his age comes down to how much money he could make. A player who is at least 23 years old and has at least three years of professional baseball experience is not counted against a team's international bonus pools. Being exempt from that would, of course, likely allow a player to sign a larger contract.

Diaz's punishment is up Feb. 19, however, meaning he will be able to sign with a team in just a few weeks. There has been a healthy amount of interest in Diaz as he has been viewed as one of the top international prospects available. He has been working out in Mexico, to which he originally defected, over the past few months.

While Diaz has received mixed reviews on defense -- he reportedly has a strong arm, but may not have the best range -- scouts believe the 6'1 shortstop has the potential to grow into an excellent batter. He did not hit for a ton of power in the Cuban Serie Nacional, but is still young and projectible. If he puts on muscle mass, he could certainly ramp up his slugging. If not, he still showed a very nice bat in Cuba with a .315/.404/.500 batting line during the 2011-12 season, his last before defecting.

The Yankees, Dodgers, Braves, Cardinals, Giants, Orioles, Blue Jays, Rays and Red Sox are among the teams that have shown interest in Diaz.

• Tanaka signs with the Yankees | Neyer: Nope, the Red Sox aren’t the Yanks