Mark McGwire hit home runs at a faster rate than anyone else in history. Is that enough to get him in the Hall of Fame despite his admitted use of PEDs?

This year, Mark McGwire will appear on his eighth Hall of Fame ballot. The burly slugger has not fared well up to this point, having topped out at 23.7 percent in 2010 before falling to a low of 16.9 percent in last year's voting. Things will not get any better for him this time around.

In terms of Hall of Fame voting, it really doesn't matter what Big Mac did on the field. He admitted to using steroids during his career, and that is the end of the debate as far as the BBWAA voting is concerned. What's worse, his most marketable skill -- hitting home runs -- is the thing most commonly distorted by steroid use in the eyes of the public. The question at this point isn't whether or not the BBWAA will elect McGwire, but rather how long he will remain on the ballot at all as ever-increasing hordes of qualified (and untainted) candidates compete with him for attention and votes. 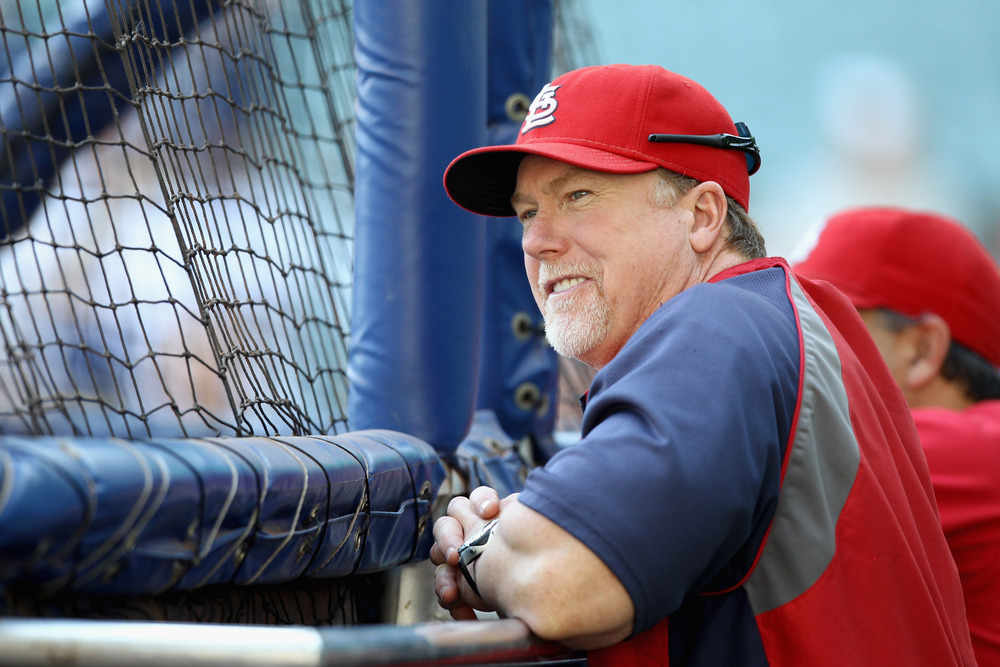 Dingers. Lots of dingers, and at a historic pace. McGwire is 10th on the career list with 583 home runs, which is impressive on its own. Those long balls came at a rate of once every 10.6 at-bats, which is by far the best in history. To put that in perspective, Babe Ruth is second with one home run for every 11.8 at-bats, and Barry Bonds is next with a mark of 12.9 AB/HR. Nobody else is even close to McGwire's prolific power output.

The Big Mac Attack was never more fully on display than in 1998, when he led the charge to break Roger Maris' single-season home run record. Not only did he demolish Maris' record of 61 by blasting 70 long balls, but he set another record (since broken by Bonds) by hitting one in every 7.3 at-bats.

During that summer of '98, McGwire's fame and popularity rose to insane levels. Every at-bat was a national spectacle, even non-baseball fans tuning in to see if he'd put on a show; even his pregame batting practice sessions attracted a crowd as people clamored to see him destroy baseballs. His race for the record with Sammy Sosa is generally credited as the event that saved baseball after the 1994 player strike resulted in a national loss of interest in the sport.

In addition to hitting home runs, McGwire was great at getting on base. He surpassed 100 walks in five different seasons, and his strong plate discipline allowed him to record a career .394 on-base percentage despite a lackluster .263 batting average. In terms of OPS+, which is adjusted for ballpark and era, his mark of 163 is tied for 11th all-time; among right-handed hitters, only Rogers Hornsby (175) and Albert Pujols (165) have him beat. Sure, McGwire was all offense -- he was a poor runner and a bad fielder, even though he won a Gold Glove in 1990. But that offense was legendary.

McGwire is, in one way, the greatest home run hitter of all time, and one of the very best right-handed hitters in history. He was also one of most popular and beloved players ever during his playing career.

McGwire used steroids. That's all that matters in this vote. And, unlike, with other suspected users, McGwire very specifically admitted to his transgressions, so there is no ambiguity in the assertion that he used. The Hall voters as a group have made their views very clear, and PED use is enough to get him left off of many ballots.

However, even if you remove steroids from the equation, there is still a case to be made against Big Mac. He was kind of a one-trick pony, as he contributed little beyond being a Three True Outcomes hitter (home runs, walks and strikeouts). As one-dimensional players go, his one dimension was as good as anybody's, but it's still a knock against him.

To put McGwire's limited skill set into perspective, his total of 62.0 bWAR clocks in as slightly below-average for Hall of Fame first basemen (65.7), as does his seven-year peak (41.9, compared with a 42.3 HOF average). By this measure, he is a borderline candidate.

As Joe Posnanski notes, McGwire is the only Hall-worthy user to both fully (and sincerely) admit that he used and work toward educating young people about the issue. If integrity is truly a factor in Hall worthiness, then this fact should also count. As things stand, though, McGwire will not be elected this year and will probably have to pin his hopes on a future Veterans Committee.