The Royals, A's, and the maddening nature of baseball

The Royals defeated the A's and defined the experience of an entire sport.

Share All sharing options for: The Royals, A's, and the maddening nature of baseball

1.
Baseball is catharsis and revelation, triumph and torture, a game filled with slow, meditative appreciations and short bursts of delirium that you store in your delirium hump for months, years, decades just in case. Royals fans were the delirium camels in this scenario. That delirium hump was withered and dry after almost three decades in the desert, yet somehow completely full. That's awful. Let me start over.

Baseball is astounding. Baseball is the intentional misdirection of what's important, an irrational tethering of hopes and emotions to something as unreliable as physics. How could something so meaningless mean so much? Yet every year, here we are, talking about a game that made us feel like that. The Royals feel like that. The players stormed out of the dugout, unconcerned with anything else in the world. Strangers hugged strangers in the stands, unconcerned with anything else in the world.

Baseball isn't for the impatient. There are Royals fans who have never felt like this about sports, and they're feeling guilty about staying up to celebrate because they have to drop their kids off at middle school in the morning. The pain of a loss, of a season, isn't sloughed off after a week of reflection. It builds up and up, layers upon layers, forming an exoskeleton that makes it uncomfortable to sit in one spot for three hours and watch your team lose in a meaningless June game. The Royals might not have 11 wins left in them this season, but they've allowed their fans to feel like that for the first time in decades.

Baseball suggests that it's not too much to ask for 11 more wins, you know.

Baseball is a hideous trickster, something that promises happy fun times and delivers bags of ash. Every year, almost every single baseball fan in the world can complain about what went wrong. That moment, that trade, that pickoff throw, that decision to bunt or not bunt. At the end of the season, almost everyone is dissatisfied. If you're wondering why people have a special kind of enmity toward the Yankees, Cardinals, or Giants, it's because baseball isn't supposed to work like that. Baseball is supposed to be about pain, every year. There are 29 teams who will have had a moment of heartbreak this season, whether it was at the beginning of the season or the end.

Baseball is Geovany Soto getting hurt. The A's started him because he was supposed to control the Royals' wacky running game, which was a decision that proved to be prescient. The Royals were going to run wild, that's their game. Soto was supposed to stop that. He left with a thumb injury. The injury occurred on a play so stupid, so baffling, that the game should have been stopped so a sideline reporter could ask what in the hell happened. Billy Butler wandered off first base like he was following a butterfly. That led to Soto hurting his thumb.

Baseball is choosing right and the results backfiring. Bob Melvin called for a pitchout in a 1-2 count in the 12th inning, and the Royals were running. It was the right call at the right time, the perfect time, and nothing worked. Derek Norris forgot to catch the ball, and the Royals had the winning run in scoring position.

Baseball is good results triumphing over bad process. Salvador Perez had terrible at-bats all night -- dreadful, abominable, pressure-mangled at-bats. In his last at-bat of the evening, Perez flailed at a two-strike slider that he had no business swinging at. He looked like this: 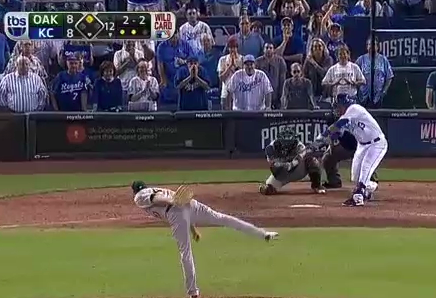 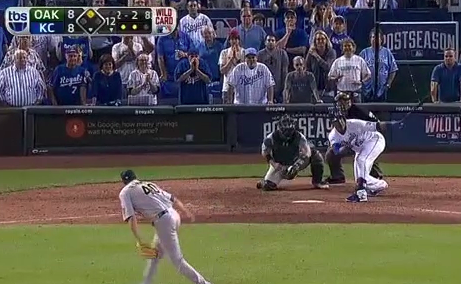 Baseball doesn't need to be approved by Tom Emanski to work. After a game filled with awful at-bats, Perez doubled down on the awful and became a hero. It made no sense, but it rarely does.

Baseball is your best fielder coming this close to keeping the ball on the infield and living to see another inning.

Baseball is accepting that those millimeters mean the difference between another offseason of sulking and something much, much more. It ticked off his glove. It ticked off his danged glove. Those millimeters meant that a bucket filled with 162 games just tipped and spilled all over the damned place. What a mess. Every game, every August concern and March supposition and September certainty, just lying there to rot over the winter.

Baseball is the worst.

Because you want to root for the right team in a game like that. That's the kind of game that makes you forget decades and revel in the now, which is a feeling I'm desperate for in every waking moment, baseball or otherwise.