Giants give Royals a lesson in old school in Game 7

A team misidentified as old school gets beaten with old school tactics by an organization that puts itself in a position to win year after year. Now the Royals must figure out how to do the same.

Share All sharing options for: Giants give Royals a lesson in old school in Game 7

On Wednesday night, the San Francisco Giants not only won their third World Series in five years, beating the Kansas City Royals 3-2 in Game 7, but they found a deliciously old-school way to do it.

Throughout October, that description, "old-school," was lavishly applied to the Kansas City Royals for their bunting, their stolen bases, and in spite of the way they kept winning postseason games with home runs. It was as if their eight stolen-base attempts against the Oakland A's in the Wild Card game froze the image of them as having a certain level of potency, when what they really were was a good team, probably a better team than they showed in the regular season, with a great bullpen which allowed manager Ned Yost to play for time until the hitters or baserunners could find a way to win. The World Series added a couple of additional wrinkles in Royals starting pitcher Yordano Ventura and some weaknesses unique to the Giants -- more about those in a moment. It's tough to generalize even about a seven-game series, but when things went right for the Royals, it was those relievers, again and again, in the thick of things.

That's not an old-school formulation. Hurrying your starters out of the game as fast as humanly possible so that you can turn the game over to a bunch of guys throwing 98 mph is as modern as today, and likely unique to the 21st century given that in the fairly recent past many teams didn't have one reliever who threw this hard, let alone three. No, the old-school team was the Giants. Just as Yost looked at his bullpen and identified the strength he had to accentuate, pushing the relievers in a way they couldn't possibly sustain in the regular season, Giants manager Bruce Bochy was faced with the possibility that his entire pitching staff boiled down to Madison Bumgarner. He didn't blink. He accepted it and ran with it.

His was not a new idea. Bumgarner, having already allowed just one run 16 innings in two World Series starts, came out of the bullpen for the fifth inning and finished the game for the longest save in postseason history. He picked up the record for most postseason innings along the way, registered an ERA of 0.42, and won the Series MVP award. Appropriately, this method of doing things echoed such past Giants greats as Christy Mathewson (3-0 with three shutouts against the A's in 1905) or the Yankees' Bob Turley, who won the Series MVP pitching four times in seven games in 1958, both starting and relieving, and earning two wins and a save. It was also redolent of the days when starting pitchers routinely entered games in relief on their off days. It was routine to the point that a pitcher could lead the American League in both wins and saves in 1930, going 23-3 as a starter and 5-2 with nine saves as a reliever.

So the Giants were as old-school as a 2014 team could possibly be. The Royals weren't old-school; they were just a light-hitting team that stole some bases. What was praised as a strength was actually a weakness. It was the result of poor planning, not a choice, and they got to the seventh game of the World Series in spite of it, not because of it. Nothing can diminish what the Royals accomplished in ending their 29-year postseason drought, but in the world's eagerness to find a storyline, it missed the point. 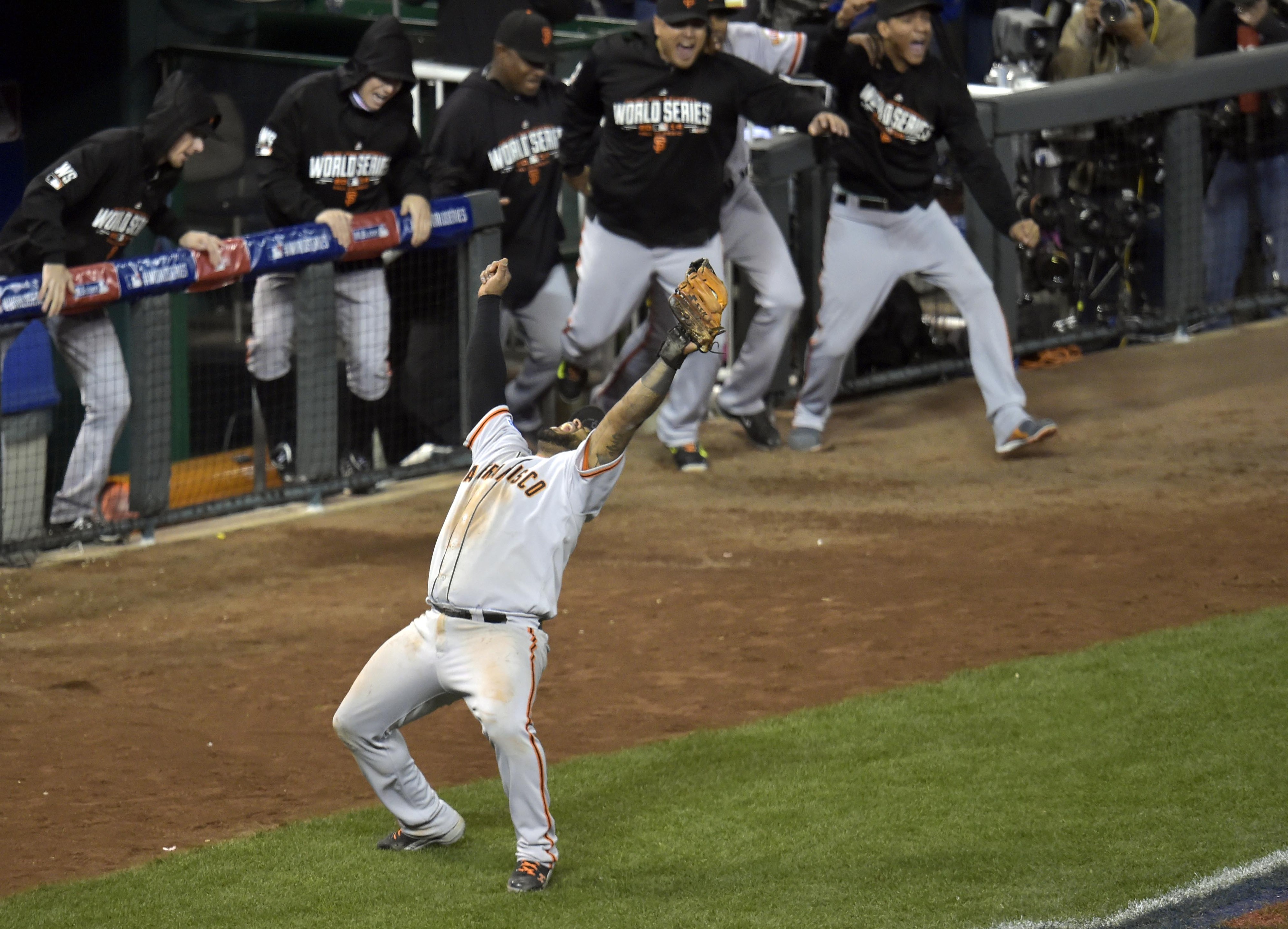 Both managers showed a kind of linear thinking in this World Series: Keep everything that's working, throw out everything that's not, never mind dancing with the one what brung ya. Well, except for Hunter Strickland. If there's a downside to limiting one's own options that way, it's that many decisions take on an air of self-fulfilling prophecy.

Watch any sport long enough and you will see some example of an athlete psyching himself up for the big game. More subtle are players and their coaches psyching themselves out. Throughout the brief run-up to Game 7 of the 2014 World Series, there was a good deal of talk from both managers as to how they would have a quick hook if their starting pitchers got in trouble. In Bruce Bochy's case, he seemed to answer endless questions, from the moment Game 5 ended on, about just when he would use Madison Bumgarner again. He was only too happy to say he was a possibility for Game 6 and prior to Game 7 averred that the lefty would be good for 50 to 60 pitches. Ned Yost was less specific about who he would go to, but acknowledged "Hooks will be quick."

In both Game 6 and Game 7, the Giants had veteran starting pitchers fail to go two innings. More than likely the reason is simply that Jake Peavy and Tim Hudson aren't very good anymore, though in both cases they were able until relatively recently. Undoubtedly, neither of them would admit that they were looking over their shoulders to the bullpen, but it would also be human of them not to know -- the mind is subtle, and your behavior can be changed by thoughts of which you were never even aware.

Imagine, then, an alternative universe in which Bochy was confronted by questions about Bumgarner's availability and rather than answer them, said, "I'm not even going to talk about that. I'm completely committed to Tim Hudson." Think of St. Louis Cardinals manager Johnny Keane, who said of leaving Bob Gibson in to complete Game 7 of the 1964 World Series even though he gave up two home runs in the ninth, "I never considered taking him out. I had a commitment to his heart." Keane was far from a great manager and he said this after the fact, but imagine the confidence of the pitcher who heard something along these lines beforehand.

The foregoing applies equally to Yost and Jeremy Guthrie. After Guthrie was hooked with one out in the fourth, Peter Gammons had a sarcastic tweet:

Then again, maybe it wasn't intended to be sarcastic because it was exactly what "we" anticipated, "we" meaning at the very least the assembled media and both managers.

What we learned from Game 7

All his life, former Kansas City player and manager (albeit with the carpetbagging A's) Hank Bauer remembered manager Casey Stengel pinch-hitting for him in a game when he had gone 3-for-3. "What the heck are you doing? I'm hot!" Bauer said, or words to that effect. "You had reached your quota," Stengel is supposed to have replied. This is obnoxious -- Casey was good at that -- but it makes some sense. Sure, players go 4-for-4 all the time, but the odds of it are always low, and the odds of a hit instead of an out decline with each additional hit. The same must be true of pitchers, but even more so -- a couple of great performances in a row doesn't necessarily presage another great performance, particularly when the opponent is always the same. The pitcher has a limited repertoire with which the hitters become familiar. Overused, he may fatigue as well as become predictable.

None of that seems to apply to Madison Bumgarner. He threw 270 innings this year. He says he's not tired. He's probably ready to go again tomorrow. Thankfully, he won't have to -- having underscored again that he's one of baseball's under-celebrated gems, we'd like to have his arm back in mint condition for 2015.

This was a World Series of two Wild Card teams. Both will be hard-pressed to return to this place again as presently constructed. Each faces possible free-agent defections that could dramatically diminish them, Pablo Sandoval and James Shields among them. The Giants will need to figure out a starting rotation to go with Bumgarner -- Tim Hudson is under contract, but that doesn't mean much. A healthy Matt Cain would have come in very handy in this postseason, assuming he could have recovered his 2005-2012 form. That's a very big if that the Giants will need to sort out.

As for the Royals, they'll have to change their ways if they want to continue. Home runs are not essential for success, but they sure as hell correlate with it, but forget power -- they just need good all-around hitters, and they don't have them. A functional third baseman, a right fielder with some pop, and they would look like a whole new team -- but these are tall orders for any team that doesn't have them. Yet, that's what they'll have to do to continue at this level.

Consistency at a high level is the real test of quality management, and the Royals will need to show that they have it. Now that they've given their fans a taste of almost-winning, they will no longer be satisfied to be merely competitive. They'll want to know why they can't have nice things, like power hitters. As for the Giants, they've already passed that test. General manager Brian Sabean has always loved his veterans -- just look at how he was tempted by Dan Uggla before he gave in to the inevitable and let Joe Panik play - but he's gotten past that. Sustaining a championship run has been impossible throughout baseball history but all for a few teams -- the Yankees, Cardinals, and Dodgers at different times, the A's at others, and so forth. That the Giants won a Game 7 means very little in one sense -- anything can happen in one game. That they got here again, that they have won for a third time in a short period of time means everything.

Sustained good results are the result of sound practices and intelligent planning, both habits that minimize the influence of luck, or tend to slant it in one's favor. That's why the Giants had the chance to be champions again. Now it falls to the Royals to show that they can join them.