There will be deserving players left off the thinking person's Hall of Fame ballot. That's a shame, so let's minimize the damage.

Share All sharing options for: Picking the perfect Hall of Fame ballot strategy

The 2015 Hall of Fame ballot is out, and there are some high-profile names making their first appearance. There will be 35 players on the ballot. If I had a vote, and if there were no restrictions on how many players to vote for, I would vote for 18 of them. I would listen to arguments for at least three more. However, there most certainly are restrictions on how many players to vote for. It's possible to make a list of 10 deserving players and leave off 10 other deserving players at the same time.

This means folks might need some help on how to fill their ballot. I can help. I do so enjoy butting in at this time of year and telling people what to do. It's probably best to separate the possible ballots into different categories. Such as ...

An odd concept, I know. Here, we separate the players strictly on merit. You can use WAR, you can use your just-feels-like-it gland, you can use whatever you'd like. I like to take the middle road and use statistics and personal bias to determine the best players.

That's an absurd list of players who should have cruised into induction when they had their first chance, or who will probably do it this year. This leaves off players I've argued strenuously for in the past, like Edgar Martinez or the woefully underrated Alan Trammell. It leaves off personal favorites like Jeff Kent, Tim Raines, and Gary Sheffield, and does so without regrets. You can mess around with the last player on the list if you want, but the top nine or so are mostly unimpeachable.

This should be a viable and common strategy, I'd imagine.

This criterion would not apply to any of the writers, though, so they would all turn in empty ballots. This would be a strategy somewhere between "I am an anarchist" and "I read that too much thinking gives you wrinkles or something." Hey, it's better than some of the other strategies. Such as ...

Ugh. This ballot. Okay, I'll play along. You are a judge and a wizard rolled into one. Judge Harry T. Potter (played by Harry Anderson), you are so smart, let the world know the wisdom of your ways. This is a list of players, most of whom played in the steroid era in direct contact with steroid users with constant access to steroids. These players excelled, but they don't have the whiff of PEDs on them for whatever reason. Maybe they're tall and don't fit the profile of bulky users (Randy Johnson) or maybe they're slender and lean (Pedro Martinez). But these guys are probably clean, you reckon.

I mean, you're just guessing.

But you're totally sure.

You haven't heard that much about them, so they're probably alright.

This is an annoying list. And Trammell, Kent, Mussina, and Raines are slipped in because of my biases. Most of the people using this strategy will probably stop before or after Schilling and vote for nothing but pitchers. That's how I remember the '90s and early '00s, mostly. The Age of the Pitcher. That's the story of baseball back then, alright. 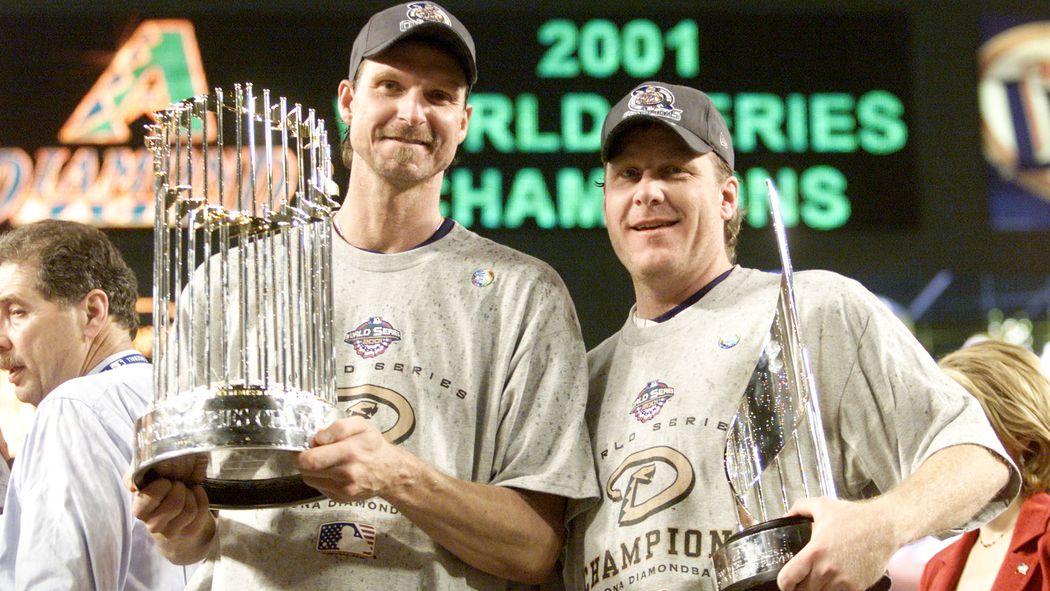 At least it's not as annoying as the ...

The No Unanimous Votes Ballot

This ballot belongs to a dungeon master with his or her own set of invented, strict rules about the quest. If Babe Ruth couldn't be unanimous, then no one can! Forget that the ballot features one of the most mesmerizing, dominating talents in baseball history, a physical anomaly who pitched brilliantly into his 40s after spending his 20s learning how to throw strikes. Forget that the ballot features the pitcher with the single greatest peak in baseball history, someone who couldn't pitch better if he programmed the exact flight path of the ball on an Air Force computer before releasing the pitch.

No, there are people who think there's no such thing as a unanimous Hall of Famer, so they'll impose this view on the rest of us.

The Save the Ballot! Ballot

This is a personal favorite of mine, and it's probably what I would do with a ballot in real life. I'm going to assume that Martinez and Johnson make it easily. I'll assume Smoltz and Biggio get in easily next year, or the year after that. This ballot is a public service combined with a statement, and it's filled with players who will likely drop off soon, only because the ballot is so overstuffed.

If you're wondering about Sosa, it's because my definition of a Hall of Famer is someone who is an inextricable part of baseball's history. You can read a longer explanation here, but I don't think the HOF is best when it's used as a reward for players. It should be a museum for fans who care about the game's history. Put the suspensions or allegations right on the plaque if you need to, but tell the story of baseball. If you don't think Sosa is a part of that story, you are 12 years old or willfully obtuse.

If Sosa bugs you, though, feel free to replace him. He had only 609 home runs, so he was just sort of passing through. The point of this ballot is to help the players who will fall off if they don't get five percent, as well as the players who don't have a lot of years of eligibility left. I replaced Walker with Raines, and while the omission of Walker bugs me, I'm very comfortable with those 10 now, and another eight or 10 next year.

Also, know that I'm so on the fence with Fred McGriff that it's hard to finish this article without mentioning him. Here I am, mentioning him, then. There are worse Hall of Famers. There are better players who aren't in the Hall of Fame. This goes for Carlos Delgado, too. I'm likely biased against first basemen because Will Clark didn't get close, so unless they lapped Clark, they're not going to crack these lists easily.

There's one more ballot strategy worth bringing up ...

Man, the '90s and '00s were awesome. You should have been there. I can't express what it was like to fire up Mario 64 for the first time. You were controlling the camera and moving around in an open 3D world. Then there was the Internet. Oh, baby, I remember stumbling onto an online enclave of Giants fans while I was living in Oregon, far away from anyone who cared. It's why you're reading this very sentence.

If you don't think Sosa is a part of that story, you are 12 years old or willfully obtuse.

This ballot would be a vote for an entire era of baseball. The '90s and early '00s happened. Those years comprise about 10 percent of baseball's history. There's video of the games and everything. This vote would be a way to remind everyone that while the '90s were going on, there weren't a lot of people moaning about the game because of these players. Everyone was interested in the game because of these players. Then Captain Renault came in and shut everything down -- shocked, shocked, he was -- and apparently the '90s didn't exist for baseball players unless they were pudgy, lanky, or skinny. That seems odd and retroactively punitive.

Could I really cast a ballot without Pedro and Randy on it? Probably not. That's a crime against baseball that I'm just not ready to commit, even if I feel strongly about players like Raines and Edgar Martinez. But there are a lot of ballot strategies out there, and those up there are the main ones.

Mostly, though, this all proves that an article like this can just as easily be titled, "Why a 10-player limit on the Hall of Fame ballot is silly and self-defeating." Look at all those good players who will be disappointed. December and January are getting awfully depressing these days.