The fact A.J. Burnett could pitch somewhere besides Pittsburgh is bad news for the Bucs.

The Pirates both made the playoffs and finished with a winning record last season, snapping a 20-year stretch without either. They leaned heavily on the strength of their rotation, which collectively posted a 3.50 ERA and the fourth-best ERA+ in the National League in spite of injuries that cut multiple starters' years short. Depth combined with a strong base rotation to begin the year led to this, but with A.J. Burnett possibly heading elsewhere, it might be asking too much for the same in 2014.

The Pirates are not bereft of useful starters if Burnett goes elsewhere, but he was the one reliable piece in a rotation full of question marks: as of now, he has been replaced by yet another question.

Much of the pressure of keeping things in the right direction is on the arm of Francisco Liriano. When the lefty is on his game, as he was in 2006, 2008, 2010, and 2013, he's an impressive arm that can miss bats and keep the ball in the yard. It's the times when he isn't that are of most concern. Since returning from Tommy John surgery in 2008, Liriano has managed a combined 3.44 ERA in his on years -- '08, '10, and last season -- and a 5.40 mark in the rest. Conveniently enough, the difference in innings in those seasons is exactly one: 428-2/3 quality frames against 427-2/3 awful ones. Much of his struggles are based on whether his slider is acting like the plus pitch it's capable of being or not, as it's far and away his top offering, with his fastball even reliant on its success. If the slider isn't there in 2014, like it hasn't been in plenty of previous seasons, the Pirates are in serious trouble.

It's worth pointing out as well that Liriano has never thrown 200 innings in a season, and has made it to 30 starts just once, back in 2010 with the Twins. Even if he's Good Liriano, he won't necessarily be there for the duration.

Speaking of injury, Charlie Morton and Wandy Rodriguez are the two arms who combined for just 39 starts and 233-1/3 innings in 2013. Morton has made more than 20 starts just once in his five years with the Pirates, and after his career-high 171-2/3 innings, last summer's 116 sits as his second-heaviest workload. While he's certainly useful when the Pirates actually have major-league defenders behind him -- as they did in 2013 and will again in 2014 -- he needs to be on the mound to take advantage. He's dealt with shoulder fatigue, hip surgery, and had much of the last two seasons cut out from under him thanks to Tommy John surgery. If he's finally healthy, and the Pirates' defense can help this pitch-to-contact arm once more, then he'll likely impress. It will be easier to believe in the idea of a "finally healthy" and productive Charlie Morton season once we see one occur, though.

As for Rodriguez, he doesn't have an extensive injury history, but he dealt with a forearm strain that shelved him for 102 games last season. It wasn't surgically repaired, with rest recommended for the strain, so if there were any recurrence of the injury (or worse), the Pirates would be without one of their better arms once more, and this time without someone like Burnett around to help keep things productive in the rotation. Now, there's no reason to believe Wandy will be hurt -- as said, he doesn't have a checkered past in this regard. Injuries to throwing elbows are a dangerous thing, though, and until he's been seen as back and healthy, it's hard to feel too comfortable. Like with Morton and Liriano, though, if things are right, Wandy is a productive part of this rotation. 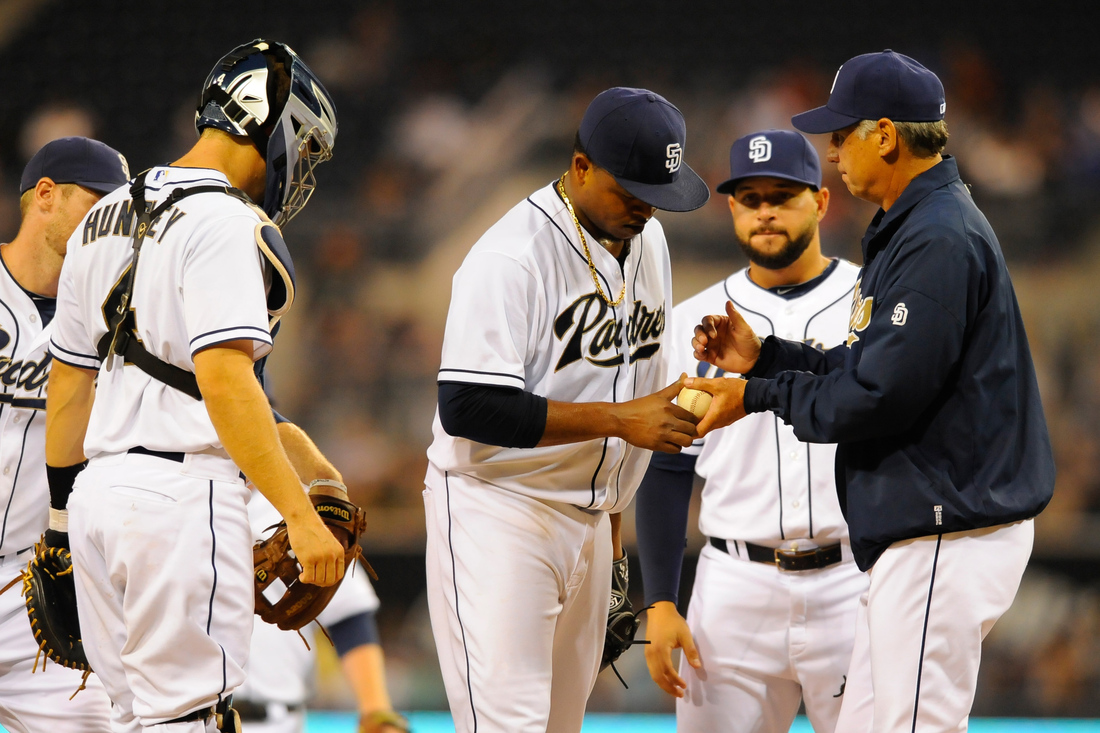 Last is the question mark that is ostensibly replacing Burnett's spot in the rotation: free agent signing Edinson Volquez. Volquez has been seen as the Pirates' next attempt at fixing a pitcher with stuff, like they did with Liriano in 2013. Two things are worth remembering, though: Liriano isn't "fixed" until he manages to succeed in consecutive years for the first time in his career, and no one knows what a "fixed" Volquez looks like, or if the Pirates can actually manage the feat.

Volquez put up a 3.21 ERA in 2008 as a 24-year-old for the Cincinnati Reds. That was the last season in which Volquez managed an above-average -- or even average -- ERA. That doesn't tell the whole story, either, as Volquez was lights out for about half of that season before things started to come apart: Volquez posted a 2.29 ERA before the All-Star break, and a 4.60 mark in the 13 starts and 78 innings that followed it. In the five seasons since, Volquez has compiled a 4.94 ERA over 574 innings, averaging just 115 of them per year. His ERA+ over that time is 75, miles away from the average: that 4.94 mark is poor, but even worse when you remember he spent the last two seasons pitching in the most pitcher-friendly environment on the continent, Petco Park -- his ERA+ reflects that.

So, let's say the Pirates get Volquez "fixed." What does that make him? A league-average starter, maybe? He's made over 30 starts in each of the last two years, but managed to lead the league in walks in the first and earned runs in the second, and only threw a combined 353 innings between the two, averaging fewer than 5-2/3 innings per despite a pitcher-friendly home environment and opponents who primarily featured pitchers rather than a DH in the lineup. Betting on even just average seems like a good way to lose money. Specifically, for the Pirates, $5 million of it.

All is not lost immediately if one or two of these pitchers disappoint or are injured, however. Jeff Locke is still around, for one. While expecting an exact copy of last year's production, in which Locke posted a 3.52 ERA despite walking over 4.5 batters per nine while striking out fewer than seven, is just adding to the future disappointment pile, he could be fine in a pinch in conjunction with the Bucs' defense. Jeanmar Gomez is similarly not an impressive arm, but he's basically been Volquez to this point in his career, plus youth on his side and minus the price tag of free agency. One of the top pitching prospects in the game, Jameson Taillon, could very well be ready to step in by mid-season just as Gerrit Cole was a year ago. It's not all things that could go wrong in Pittsburgh, but Taillon is just one arm, a rookie one at that, and the team would likely be better with both him and Burnett around.

There is also Cole, of course. He's one of the game's best young hurlers, and if he takes the leap this year, in his first full major-league campaign, he could easily be the ace this Pirates' team needs. Just Cole won't cut it, though: they need Liriano to throw quality innings again, Morton to stay healthy, Rodriguez's elbow to stay attached, and for someone to mercifully make the fifth spot a non-disaster before too much of 2014 passes the Pirates by. It's not impossible that most -- or even all -- of this will occur, but that doesn't mean it's likely. All the more reason why Burnett might still be necessary at this late stage.