A future Hall of Famer announces he's ready to hang 'em up.

A franchise can go a lifetime without having a true great at a position. The Yankees have had Lou Gehrig at first base, Babe Ruth in the outfield corners (he was both their starting left and right fielder for his entire career, depending on the day), Joe DiMaggio and Mickey Mantle in center field. What they never had was a shortstop who rose to that level -- not until Derek Jeter.

Today Derek Jeter announced that the 2014 season would be his last. It was yet another sign that Jeter is the latter-day DiMaggio, both being men inclined to silence, reticence, even taciturnity who far preferred to let their play, not their words, be their way of communicating with the world. When DiMaggio slipped at 36, he walked away. The Yankees offered him $100,000, a very healthy salary in the early 1950s, to play one more year, even if that meant sitting on the bench except to pinch-hit. DiMaggio said no, because he could not accept the idea of appearing on the field at less than his best.

We don't know what Jeter is thinking, and even when he does speak to the media we probably won't learn much, because he is an expert at saying less than nothing, but it's easy to believe that some kind of parallel to DiMaggio's thinking is at work here.  He said in his statement, "As I suffered through a bunch of injuries [in 2013], I realized that some of the things that always came easily to me and were always fun had started to become a struggle." That is the DiMaggio principle at work there, having the self-awareness, the humility, and the strength not to hang on, but to get out while the aura of your greatness is still intact.

The Hall of Fame baseball writer Grantland Rice wrote a poem, "To Any Athlete:"

Why is it each is the last to find
That his legs are gone -- that his eyes are bad,
That the quicker reflexes have left his mind,
That he hasn't the stuff that he one day had,
That lost youth mocks, and he doesn't see
The ghost of the fellow that used to be?

We can all reflect on that and name an athlete or 10 that fits that description, but that wasn't DiMaggio and, though it seemed for awhile that it might be Jeter, today he showed Rice's words didn't apply to him either.

Before Jeter came, the Yankees were dying for a shortstop, both on a year-to-year basis and in a generational sense. It was a long, long valley between Phil Rizzuto -- mostly a very good, not great player, belated Hall of Fame enshrinement notwithstanding -- and Jeter. There were flashes from Gil McDougald, when the Yankees let him alone to play short instead of sliding him around the infield; the brief flowering of Tony Kubek before injuries derailed him; some unusual offense at the position (and unusual defense, in a sense) from Tom Tresh; spectacular defense and one home run for the ages from Bucky Dent... And then nothing. Less than nothing: Roy Smalley and Bobby Meacham and Rafael Santana and Alvaro Espinosa -- guys who, if you weren't there and didn't go through the trauma, there is no reason for you to remember. Between the usual lack of depth at the position, the team's total inability to draft and develop players in those years, its no-exaggeration spite for the few players that did come through the system, and collusion among major league owners that prevented them from signing each other's players (why Cal Ripken, Jr. or Alan Trammell was never a Yankee, hard as that is to imagine now) and it was as if the Yankees, still baseball's biggest-spending team even in an age of self-imposed (as one of those collusive owners) limits, weren't ever going to be able to patch that hole. 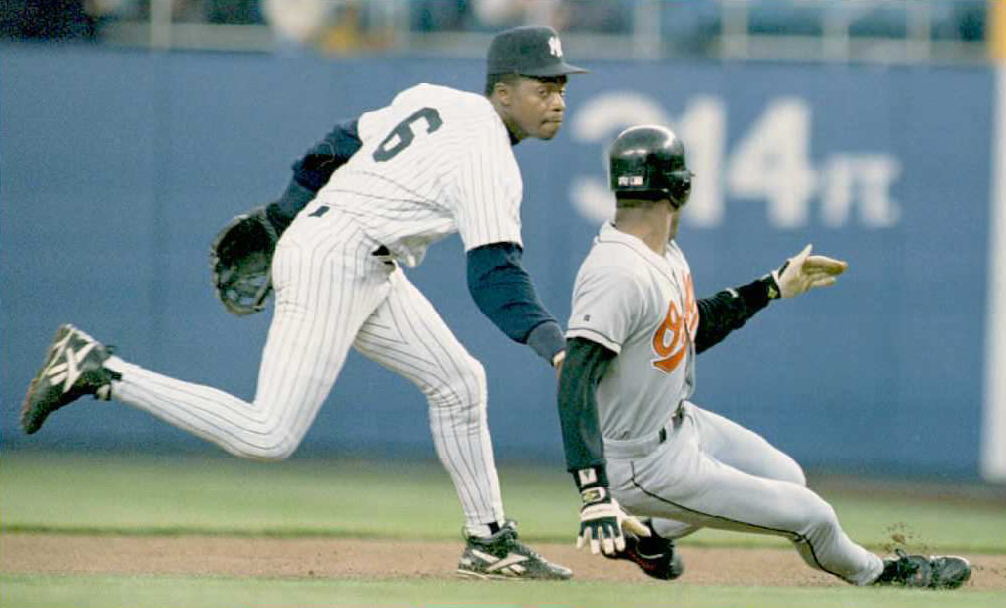 Jeter changed all of that. The sixth-overall pick in the 1992 draft (Phil Nevin, Paul Shuey, B.J. Wallace, Jeffrey Hammonds, and Chad Mottola went ahead of him), he was available to the Yankees first, because the club had embarked on an experiment in even having a first-round pick, a true rarity in the George Steinbrenner years -- the Yankees had burned their first-rounder on free agents in all but two seasons between 1978 and 1990. Second, unlike first-overall pick Brien Taylor, who the Yankees selected the year before, they chose wisely, getting a player who had tremendous physical talent but also the work ethic and intelligence to capitalize on it.

No, he wasn't perfect, but he was more than enough for a team that had been so hungry for mere competence at shortstop.

Finally, they were simply lucky in the way that sometimes fortune protects us from the dumb things we might have done had we been free to act according to our wishes. Had incumbent shortstop Tony Fernandez (a great all-around shortstop at times in his career but far from that in New York) had not suffered a season-ending elbow injury during spring training 1996, Jeter might not have gotten his opportunity when he did, might not have 3,000 hits now, and so on. Neither Steinbrenner nor manager Joe Torre were thrilled with the idea of going into the season with a rookie shortstop, but with Fernandez out they were more or less stuck. Still, it's easy to imagine that if Jeter had not hit a home run on Opening Day 1996 and instead had gone 0-for-4 with an error that the Yankees would have traded for a veteran replacement within the week.

When a rookie Meacham made an error that allowed the Rangers to score the game-winning run in the second game of the 1984 season, Steinbrenner had him sent down -- not to Triple-A, but to Double-A. Meacham's confidence never recovered. 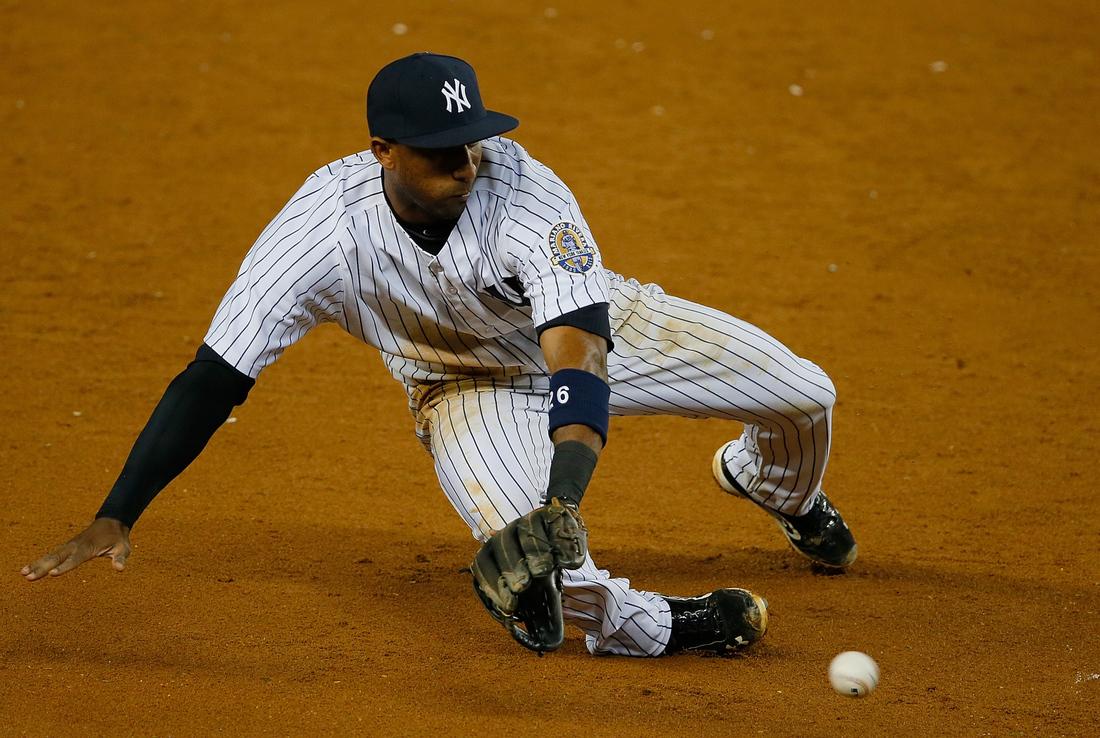 In a sense, today's announcement is redundant. Jeter's era really came to an end when he fractured his ankle during the 2012 postseason: even the greatest of athletes can't play shortstop on one leg at age 39 or 40, especially if defensive range was never his strong suit. We got a preview of what the aftermath might be like: It was back to the 1980s with Eduardo Nunez (another Meacham), Jayson Nix, Reid Brignac, Alberto Gonzalez, Luis Cruz, Brendan Ryan -- in short, the discard pile. This year may well be more of the same, with occasional gimpy turns from Jeter and the good-field/no-hit icon Brendan Ryan getting the bulk of the starts.

Jeter had his flaws, of course, especially the aforementioned lack of range. At this best, he was so good a hitter for the position that the few extra grounders he allowed to get through the infield didn't matter as much as they would have for a less-productive player. A grounder past the shortstop is a single that might or might not score, but Jeter might hit a double, triple, or home run. No, he wasn't perfect, but he was more than enough for a team that had been so hungry for mere competence at shortstop. He could have been two-thirds as good and he would have been the best shortstop in franchise history. Instead they got Mr. November, a heady gamer and Hall of Fame talent, a player who was robbed of an MVP award or two. Whatever the deformed mold of Yankees shortstops, he shattered it.

The standings took notice. The return of the Yankees to the World Series after 15 years away and to winning after 18 years, and the rise of Derek Jeter were hardly coincidental. He was literally something the Yankees had never seen before, the first true Hall of Fame shortstop in team history. We won't see his like again.

• Roy Oswalt retires of Hall of Almost Famous | Remember when Roy played OF?