Major League Baseball did something that's pretty standard in the business world, and it reminds us that baseball isn't so special after all.

Major League Baseball's owners voted to allow teams to eliminate pension plans for non-uniformed personnel. Scouts, administrative assistants, and everyone without a number on their back.

I'm mostly ignorant about this topic. Let's be real, real clear about that. I can (and will) read the same links that you can find, but this seems like an internal business decision that requires more context than I'm willing to unearth.

That doesn't mean I don't have opinions, though. Instant, forceful opinions. The opening to Adam Rubin's article on ESPN does a great job explaining how it's possible to have an instant reaction.

Major League Baseball owners, despite earning more than $8 billion in revenue in 2013, voted in January to allow individual teams to slash or eliminate pension-plan offerings to their non-uniformed personnel.

That's not an editorial note tucked in the middle of the sentence. Just a fact. But like a wrench can be a weapon, the fact can be something a little more. And it's what's behind every default reaction after reading the news.

"Wait, I thought baseball was rolling in cash?"

It is. They are. And when you dig into the details and parse the corporate jargon, MLB is allowing their clubs to make a switch from a pension to a 401(k)-type of retirement plan. No one's done anything yet, but, wait, hold on, where are you going, David Glass? I'm not d…

The argument you're hearing from MLB is some variation of "this is how it is now." And they're right. This is how it is now. Unless you're a police officer or teacher, the odds are great that you don't have a pension. The odds are at least decent that you don't regularly interact with anyone who has a pension. And even if you are a police officer or teacher, your pension is probably under attack, at least from some quarters.

The difference is that those pensions are a flashpoint because cities, counties, and states are often flailing around in fiscal quicksand, and the pensions are an easy scapegoat. That's not close to the case with MLB, which probably auto-enrolled you in MLB.tv while you were reading this. So why now?

Because they can. If the Padres or Rays or some other limited-revenue team wants to cut costs like the typical American corporation, they can now. Depending on where you sit on the political spectrum, you may or may not be opposed to MLB exercising their right to do it. This isn't an argument to sway you either way. Again, I'm mostly ignorant about American business practices and ethics in 2014.

That doesn't mean it's an inappropriate time for a reminder, though. And, as a reminder, this is not what baseball's revenue distribution is like. 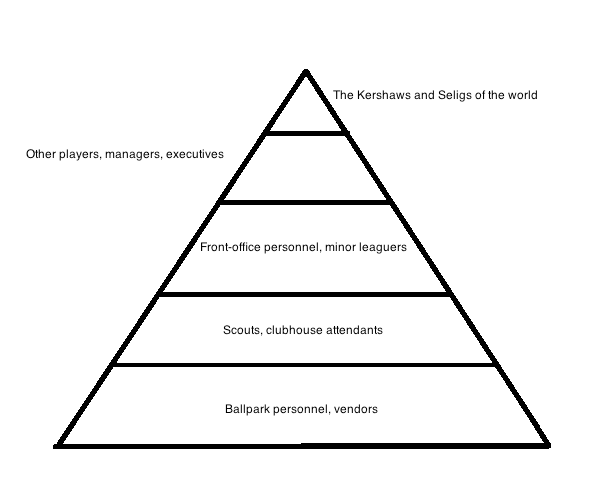 Rather, it was more like this before the announced pension changes:

But that wouldn't do, so they had to change it to this:

See, the line going down is a little thinner, which allows for some thickening at the top. If you squint, it's there. At the top are two blue whales, and below them it's turtles all the way down. Which immediately strikes at our sense of ... something. Maybe your belief in free-market systems, or maybe your sense of equity.

Whatever the case, here's the twist at the end: It could be so much worse. For most of baseball's history, there was one box up there, and it was the owners'. The players were down with the mascot handlers. In a lot of industries, there's still just one box.

My conclusion, then, is as simple as it is ignorant: I just wish MLB didn't have to act as predictably.

It's at this point where I'll throw my hands up and shrug my shoulders. I'm just a baseball writer, so what do I know about the machinations of big business? If this is what the average American retirement plan is like now, maybe it is what MLB should let their teams choose.

My conclusion, then, is as simple as it is ignorant: I just wish MLB didn't have to act as predictably. I wish there were really something special about the sport that transcended real-world forces, and that minor leaguers and scouts alike could be the vertebrae of baseball and be reasonably paid at the same time. I wish that when MLB got to dive into McDuck vaults, it meant everyone won, all the way down.

It would make it easier to say things like, "Wow, the Diamondbacks sure got a steal with Bronson Arroyo."  That's all. And it's a naïve thought. I get that. But the thought that baseball is healthy, so healthy, healthy like no time in the sport's history, doesn't feel as tingly as it should.