Robinson Cano, Yasiel Puig, and hustling down the line

Would you rather have a loafer down the line, or a crazy player who will eventually run through a wall?

Share All sharing options for: Robinson Cano, Yasiel Puig, and hustling down the line

People are still annoyed at Robinson Cano's touch-and-go relationship with the first-base line. It's a tired topic that shouldn't still be around, but it keeps jogging up the storyline, never reaching the end.

"If somebody told me I was a dog,’’ (Yankees hitting coach Kevin) Long said here Sunday, "I’d have to fix that. When you choose not to, you leave yourself open to taking heat, and that’s your fault. For whatever reason, Robbie chose not to.’’

That was before Long explained how hard Cano worked in other parts of his game, but you know which quotes got the headlines. So I apologize, but Anecdote Theater is the best way for me to explain why people still get so mad about Cano's loafing.

When I played Little League, I was an arrogant twit. I was an All-Star until I was about 10 because of my natural talent. No one taught me how to be that good. So when coaches told me to get my back elbow up or close my front leg, I'd respond with a pfffft. You can't argue with results, baby.

Figuring out how the Yankees great stacks up against the best shortstops in history.

I stopped playing Little League at 15 because I was awful. I never progressed, and I wasn't going to sit on the bench, where I belonged, so I quit. And in the 20 years since then, I've had a lot of time to think. Maybe I should have taken the coach's advice. Maybe I should have taken baseball seriously. I could have been good enough to play all the way until … like, Little League, but the one for slightly older kids.

Man, if I played now, I could take State. How much do you want to bet I could throw this baseball over those mountains?

The odds are fair that you have a similar story. Maybe not the part about being a twit, but the part about not taking the game as seriously as you would today. Admit it, you've had those thoughts. You would study the game more, realize the importance of sound mechanics, work the counts better … and, sure, you could throw that baseball over those mountains. I believe you.

The point: There's a reason fans take hustling seriously. It's the one thing we know we could have done. I did not have natural talent or athletic ability, but I could have hustled. I could have studied. I could have tried harder. I could have busted it up the first-base line. And if you did all of those things, but still didn't progress far in your baseball career, you have special animosity toward the players who don't hustle. Why should they get all the talent? Seems unfair.

People get grumpy when players like Cano (or Barry Bonds before him) jimblejog up the line as if they're stuck in the gravitational pull of the dugout. It offends sensibilities. 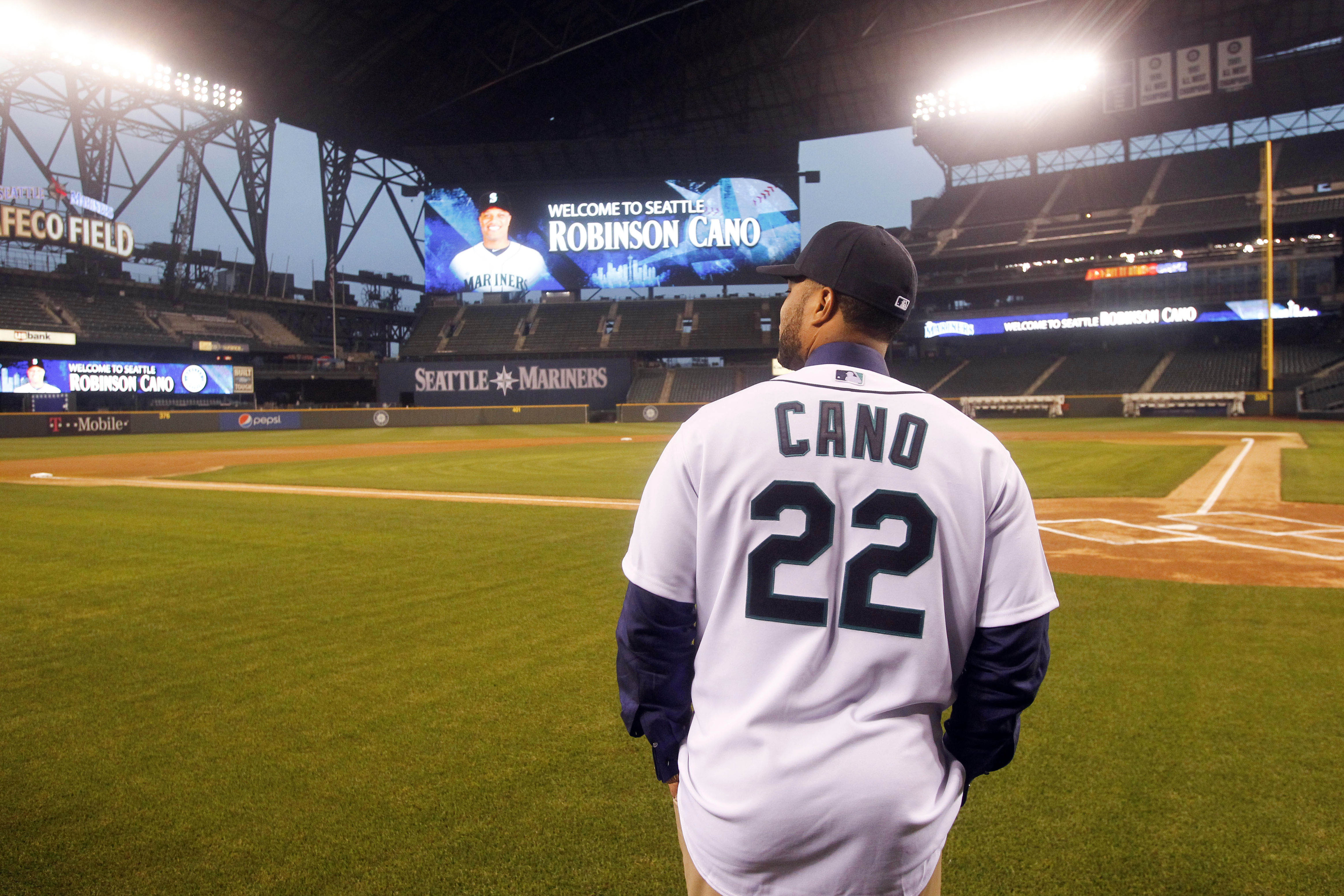 On the same day the Cano story came out, this was a headline:

Dodgers' Yasiel Puig plans to dial it down, at least a little, in 2014

"I play as if demon hounds are chasing me, gnashing their teeth, ready to feast on my mortal soul, only to have me born anew, where they will be waiting again," Puig said. "There is no rest, no peace. There is only the chase, an eternal chase, and I will not let them catch me. And if that means running through the occasional stop sign at third …"

But it could have. Puig plays like a freak. The Dodgers want him to slow it down, for a lot of reasons. He's doing things like overthrowing cutoff men at silly times, for one. But the Dodgers are also concerned he's going to go through a wall like Michael Madsen in The Natural, except Puig will be running down the first-base line at the time.

I'll tell you as a fan which one I'd rather watch. Puig plays like he's a mongoose wrestling with a plugged-in hair dryer that fell in the bathtub. It's fascinating. It's compelling. It's entertainment. When I plunk down the clams for a ticket, it's what I want to see. 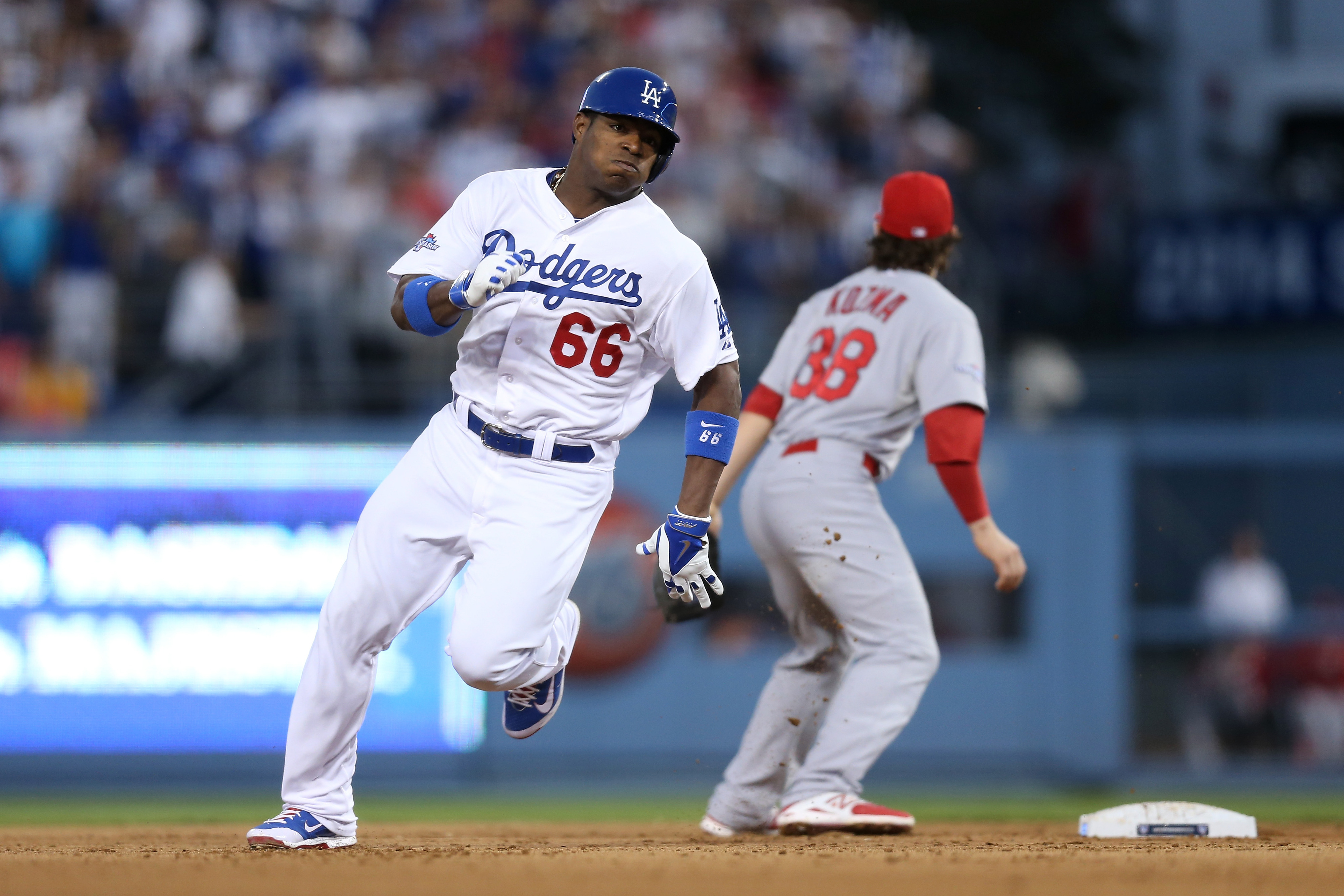 I'll tell you as a GM or owner which one I'd rather watch. In the first week of the season, someone will clutch the back of his leg as he runs down the line, and he'll go on the disabled list. It's possible a loafing player will cost his team a base during that time. The former will cost his team a couple of weeks, minimum. The latter will cost exactly one base, by definition. Maybe a run. Maaaaaaybe a win if the circumstances are perfect.

Give me the loafer as a GM, every danged time. When it comes to winning baseball games, unless you actually believe that grit and fire directly correlate with wins, there's more to lose with reckless abandon than there is by not running out routine grounders.

This is a false dichotomy, sure. The correct answer is somewhere in the middle. It's not a binary thing. Just dial it back, Puig. Be a standard freak instead of a generational freak. And pick it up, Cano. Fake the caring just enough that you aren't putting your hamstrings at risk, and shut the old people up. These two players represent different ends of the spectrum, though, and I know which one I'd rather watch. And I know which one I'd rather see from the players on my team.

This will come up again. It won't necessarily be Cano, and it might not be Puig, but there will always be people waiting for a loafing superstar, and those people will be holding a hot take in one hand and a -gate suffix in the other. But as someone who watched Barry Bonds loaf down the line for several healthy-hamstrung years, I'm convinced lack of grounder-based hustle isn't a big deal when it comes to wins and losses. The only harm is that it makes baseball a little less interesting and aesthetically pleasing.

Depending on what you're watching the game for, though, that might be enough to keep yelling.