Defense has, historically, been difficult to gauge financially, but Simmons' new deal is a reminder that some MLB teams are more interested in investing in it than ever.

Defense is as important as anything in baseball, but figuring out just how much it's worth has been difficult. It's much more vague in that the ways to measure defense, successful or otherwise, are nowhere near as consistent or reliable as figuring out the effectiveness of hitting or pitching. There is a market standard for pitchers of a certain caliber, and batters who can hit 30 homers while drawing walks, but a top-shelf defender, especially if that's their primary positive attribute, might see their pay all over the map.

That's what makes the Braves' extension of shortstop Andrelton Simmons so fascinating. Simmons has accrued just over one year of service time -- 1.125, if you're interested in the exact figure -- but just agreed to a seven-year, $58 million contract with Atlanta that guarantees he'll be a rich man regardless of how the rest of his career pans out. It's not just an extension, but it's a record, too: Simmons is earning more money, and more money per season, than Ryan Braun did after signing a contract with the Brewers following his first season in the majors.

Braun agreed to an eight-year, $45 million deal with Milwaukee in mid-May of 2008, buying out all of his arbitration years and then some.  In his rookie 2007, Braun batted .324/.370/.634 with 34 homers and 66 extra-base hits overall in just 113 games, and then followed that up with nine more homers and a .549 slugging in his first 39 games of 2008. Until Simmons agreed to his extension on Thursday, Braun's deal was the record for a player with just over a year of service time under his belt. With Braun, it's easy to see why the Brewers would fall over themselves to sign him to an extension. He was just 24 years old, so they could lock him up through his peak years before he ever got to them. He had hit, to that point, .314/.356/.611 with 43 homers and 90 extra-base hits in 151 career games. Obviously, if the player is willing to sign on long-term for a reasonable contract, you come to terms when they are capable producing that.

With Simmons, it's not as obvious. Between his limited debut in 2012 and his full campaign in 2013, the shortstop batted .256/.304/.400 in 206 games and 840 plate appearances. It's not terrible for a shortstop -- the league-average shortstop batted .255/.308/.373 in 2013, meaning Simmons was slightly better -- but it's hard to see $58 million guaranteed from that just the same. That's where we come back to defense, though, where Simmons excels. While wins above replacement certainly isn't perfect, the three most oft-used models have nothing but great things to say about Simmons, with FanGraphs pegging him just under five wins, Baseball Prospectus just under six, and Baseball Reference the most enamored by rating him just under seven wins above replacement. 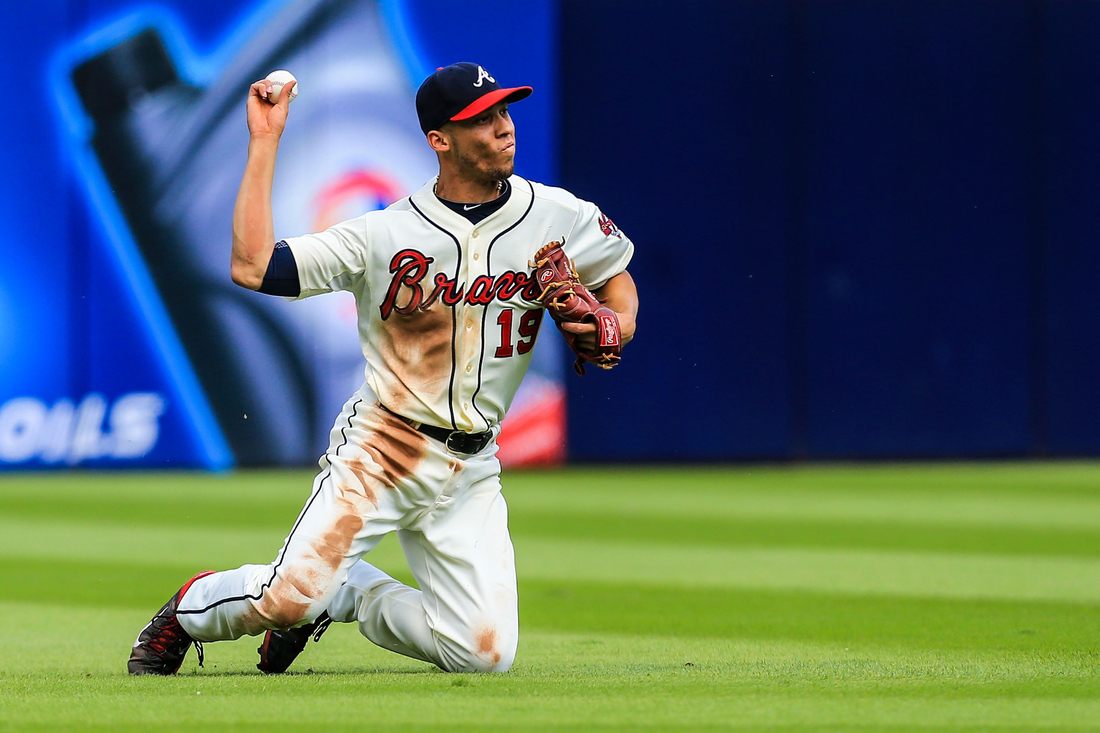 It's not quite consensus, but there's a common theme there, and it's that Simmons' defense is extraordinary. It's not just statistics that say so, either, as it's been the high point for Simmons forever from a scouting perspective. Heading into 2012, Baseball America reported that Simmons was rated the top defensive shortstop in the Carolina League, and described him as a "premier defender" with a "cannon" arm and the "soft, quick hands" necessary to truly excel as a shortstop. This glove pushed him through the minors faster than his bat would have liked -- think Jose Iglesias' seemingly stunted development at the upper levels as a reference point -- and while he'll never be a real threat at the plate, the Braves locked him up before the bat could catch up to his phenomenal glove, an event that would have likely meant his extension would look more like that of Elvis Andrus than this potential $58 million bargain, or at the least, something in between those two.

Braves bow to the inevitable with extensions

In reversing themselves and negotiating extensions with core players, the Braves confronted a crisis that threatened to escalate their player payroll far beyond its current limits.

Braves bow to the inevitable with extensions

Simmons' deal isn't ushering in some new age where defenders are all going to be paid spectacularly, at least not by itself, but it is a reminder that teams are willing to recognize and pay for defense more than they might have in the past. Baseball is always making -- and spending -- more money, but seeing Simmons break Braun's record from 2008 is a little jarring on the surface. It makes sense, though, since run values are run values, and Simmons, to this point, has actually earned more wins through his first two seasons than Braun did, assuming you can trust the defensive numbers.

Trusting those numbers is the difficult part, of course, but with Simmons, the Braves have their own scouting (plus anyone who has working eyeballs) on their side, and the money will work for his glove even if his bat never improves from where it's been in his first 200-plus contests. It will be interesting to see if more teams begin to follow suit and invest in their high-profile defenders in the future, treating them as if they were the equals to quality hitters and pitchers that they are. Either way, the Braves extended their relationship with one of their best young players past his initial six-year pact, and did so at what can be considered in these free-spending days a reasonable cost.