Preseason Predictions: What are they good for? (Absolutely nothing)

It's baseball's silly season, when preseason publications pour out predictions by the score. Some of them will be right, many wrong, and none of it is worth getting upset over.

Share All sharing options for: Preseason Predictions: What are they good for? (Absolutely nothing)

Preseason predictions are foolproof, speculative declarations on the unknowable, and whether based in fact or pulled out of thin air are not falsifiable except via the passage of time. Don't tell anyone I revealed what analysts have been hiding behind the curtain for years, but it's true and now that you know, you are free to make the boldest and most asinine predictions you can think of to absolutely anyone who will listen, free from fear of ridicule.

Determining the true face of MLB

Let's drop the popularity contest shtick and figure out what really matters: who's prettiest in the majors.

Determining the true face of MLB

If you're reading this on the train, turn to the person next to you and tell him or her that the Cubs are going to win the World Series or that Miguel Cabrera will never hit another home run. If you're going to be that bold with your predictions, it's probably best to stick to strangers in public places (you're probably still not the craziest person on the train!). If you turn out to be right, you can claim that your analytical skills are far superior to that of your counterparts while boasting, "Well, I told you so!" every time the real outcome matches your prediction. If you do happen to be wrong, which happens way more often than being right, you're insulated from harsh criticism because not only is there a short memory for these predictions, but if you're way off base you can claim that your prediction was just an educated guess and that there is absolutely no way to know what will happen for certain because baseball is unpredictable. That explanation satiates 99 percent of people, but that one percent can be pretty voluble, becoming deeply offended by what is, after all, mere conjecture.

Last January, I reaped that kind of reaction when I wrote a pessimistic  piece on the Toronto Blue Jays' chances last January that appeared on SB Nation's Jays site, Bluebird Banter. The premise of the article was that the roster improvements the Blue Jays made by adding R.A. Dickey, Jose Reyes, Melky Cabrera, Josh Thole, and Maicer Izturis wouldn't have enough of an impact to let the club contend in the AL East, a division that required an average of 95 wins to capture over the previous 10 seasons. My intention wasn't to troll my friendly northern neighbors. In 2012, the Blue Jays had won just 73 games, and messing with a simple Pythagorean Win-Loss calculator made it obvious that adding 22 more wins to get to 95 was going to be difficult.

Not surprisingly, this column went over like a lead balloon, crashing into Canada and causing it to emit snark and contempt on social media, in my inbox, and in the comments section. I wasn't offended and could even be sympathetic to the vitriol -- no one likes to see their favorite's chances denigrated -- but there was no way to respond, resolve, or defuse those attacks because we were still months away from the first game; there couldn't be any winners or losers to this particular argument while stuck in offseason purgatory. The best I could do was throw up my hands and say, "This is what math and history say," while they responded, in so many words (some more polite than this, some less), "No stupid, you literally have no idea what you're talking about." The prevailing wisdom was that the Jays had made enough improvements by adding the reigning NL Cy Young winner and a handful of talented major leaguers spurned by Jeffrey Loria to contend. I was raining on an entire country's World Series parade. 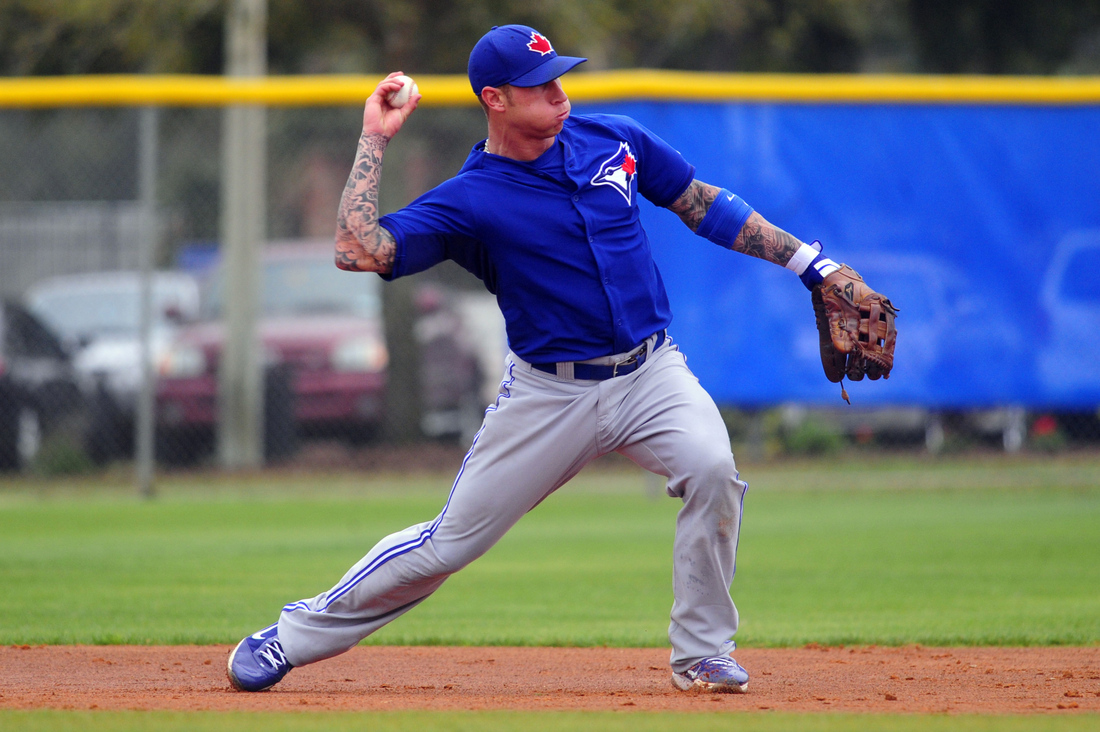 By the end of April, the Blue Jays were 10-17 and already 8.5 games out of first place in the AL East. Jose Reyes broke his ankle just 10 games into the season. That set off a string of injuries that got to pretty much everyone this side of George Bell,  and the few players that managed to stay healthy still weren't playing well. In short, the Jays took a hell of a beating last year, finishing with a 74-88 record, just one game better than their 2012 record.

Lest you think I broke my arm patting myself on the back or gave into the temptation to exult in the comeuppance received by those who doubted my thesis (or am doing so now), there were three things about the prediction that I readily admit: First, all I was attempting to do was present indicators of what might happen. Second, while the conclusion I reached was similar to the actual outcome, there was absolutely no way to know that it was ever going to get as bad as it did for the Blue Jays. I wasn't clairvoyant, or even all that insightful. I was just the proverbial blind squirrel who found the nut, someone with Excel and too much time on her hands. Third, and perhaps most obvious, the degree of suckitude that was the Blue Jays last season surprised everyone, myself included.

None of this is to discredit offseason predictions altogether. They are useful as a conversation starter, if nothing else, a way to fill the long wait for games to resume. Sometimes, we get lucky and get to gloat about being right, and other times, we get to quickly wash our hands of being wrong since the sport is mostly impossible to predict. That divorces the business of prediction-making from that of having to stand by your words, which is the basis of integrity. No one should become overly exercised by a sports prediction because the absence of integrity also implies a lack of seriousness. In other words, it behooves us to keep our senses of humor intact about the predictions that come back to haunt us. There was a tweet by Jon Heyman back in April of 2010 that reads, "Good job by #phillies to sign superstar Ryan Howard to a 5-year contract extension" that still gets retweeted nearly four years after the fact. If predictions actually meant anything, he would have long since hidden himself away in shame, but they don't, and so he soldiers on.

To be bold is to sometimes be stupid; I was right about Tyler Flowers last season, but I was terribly wrong when I predicted that the White Sox would give the Tigers a tough race in the AL Central last year. I took no heat for that, and yet, you'd think the over-positive prediction would be worse -- better to be surprised by a team dismissed doing well than to be disappointed by a team praised as a contender dying like a dog. I happened to be right about the Blue Jays, not because of some anti-Jay animus, but because that's the conclusion to which the data led me, just as the inputs I saw regarding the White Sox led me to a more positive, wholly errant conclusion.

Some predictions are rooted in opinion or just blind optimism, but others are well researched and use the past to attempt to predict the future. It would be a disservice to all of the rational baseball fans out there just to read tea leaves or shout random prophecies at strangers on trains instead of attempting to glean something meaningful regarding what's about to happen. Even then, sometimes the obvious picks (or those that seem obvious to some plurality of prognosticators) end up having looked much better on paper than they do after 162 games. That's all predictions are, an interpretation waiting to be affirmed or denied by events. They're nothing to get upset about.