Budweiser has no concept of baseball, geography, possibly reality

We have no idea what timeline or alternate dimension Budweiser thinks MLB exists in.

Share All sharing options for: Budweiser has no concept of baseball, geography, possibly reality

Anheuser-Busch has teamed up with Hall of Fame shortstop Ozzie Smith in an attempt to make Opening Day a national holiday/generate buzz with their name attached to it as a spring training publicity stunt. You would think they would put a little more effort into the whole thing, though, since they're using a White House petition to get their message out there. You'd be wrong, though, says this map they tweeted out on the @Budweiser Twitter account on Tuesday:

(Budweiser deleted the original tweet, but you can still find the map itself thanks to the screenshot-loving internet.) 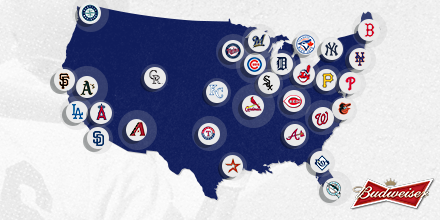 There are so many things wrong with this, and not all of them because of the design of the map. The geography is wonky, for one. We can maybe forgive them for Toronto being an American city, for the same reason those maps in your middle school textbook had Alaska as a floating island and Hawaii as just off the coast of California. Some of the other mistakes are far more egregious, though.

Hall of Fame Cardinal and Padre Ozzie Smith looks to embark on campaign in the lead up to Opening Day to make the event into a federal holiday.

Granted, this is because of the design of the map more than anything: these little circle logos are too big for such a teeny map, and it leads to geography gone askew. You could forgive that and chalk it up to poor design, but don't worry, there's more to point out!

I guess we should just be happy Budweiser remembered what states those two play in.