It's been a dry few years for the card designers at Topps. Does this year's model show any improvement?

The 2014 Topps were released last week, and though I promised myself a few years ago that I would grow up and stop wasting money on new baseball cards, I'm now the abashed possessor of three jumbo packs of the new set.

I couldn't help myself, and yet I've made it no secret that I feel incredibly disconnected from the modern cards. It's a feeling that many people apparently share; an article I wrote last year on the decline of Topps led to a New York Times article lamenting the deterioration of hobby cards.  Cards are an inessential accessory and one could just give up the habit completely, but for some reason the bastardization of my childhood hobby is a wound that I annually pack with as much salt as possible. This is not something I'm particularly proud of, but we all have our vices and my propensity to perpetuate my own misery is well documented, especially when there's nostalgia involved.

There's a stubborn spot in the back of my mind that stores a seasonal hope that the newly-released set will be so well executed that it might rekindle my love of collecting. Sadly though, adding WAR to the back of the cards wasn't enough to win me over; the 2014 set is another forgettable attempt, just another nail in the coffin of inevitable hobby-card extinction. 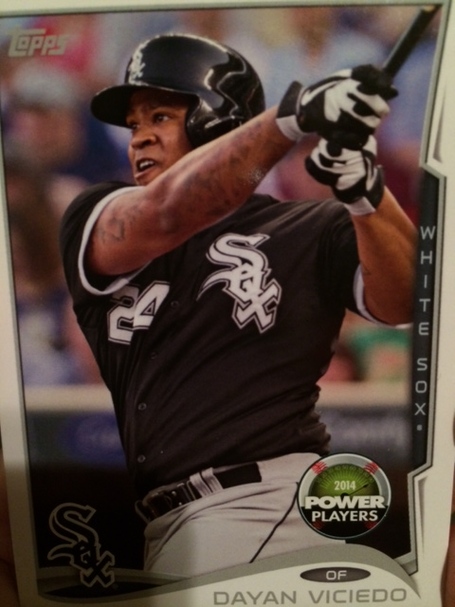 Nothing says "power player" like a guy with a career 97 OPS+.

I went to three stores on the actual release date, January 29th, seeking the scraps of cardboard I love to loathe, but no one, not even in a city as big as Chicago, seemed to have them. I called a local card shop and the owner said he hadn't received any yet and blamed the delay on the polar vortex. Four days later, I found some jumbo packs at Target, which is the easiest place to procure cards since it doesn't involve a judgmental shop owner giving me the stink eye and a lecture about wasting money on new cards instead of the 1970s mint items he keeps under glass. He's a good guy trying to make a living on a dying hobby, but since cards can't survive a cost-benefit analysis involving an awkward guilt trip that feels a lot like going to Championship Vinyl and asking for a copy of "I Just Called to Say I Love You" instead of Iggy Pop, I'd just prefer to get my fix from an unassuming cashier in a red shirt who scans the packs along with my eggs and laundry detergent (and probably assumes the cards are for my children instead of myself).

As I reached the register, it occurred to me that baseball cards are a really expensive hobby these days. It's still cheaper than video games, a good bottle of bourbon, or actually going to the stadium for a game, but when I was growing up my grandfather compared everything to the price of mayonnaise (his corner of the Great Depression was apparently short on condiments) and I catch myself doing that sometimes; the once cheap thrill of pulling wax packs now costs more than a jar of Hellman's -- the jumbo packs were $5.99 each, or roughly 16 cents per card. Having done that math, I found myself becoming irrationally angry at every utility infielder and has-been in my packs. No one frustrated me more than Cliff Pennington, who must be related to someone at the Topps organization -- out of the 108 cards I pulled, five percent of them were his*.

*On the off chance you're a Pennington super fan, or Pennington himself, please send me your address and I can hook you up with a few of these because I can't imagine what I'm going to do with all of them. 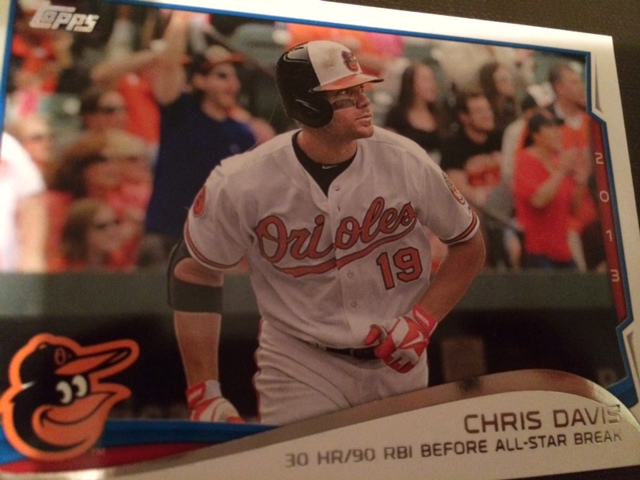 Chris Davis gets a special citation on his card.

Since baseball cards have largely been the same nonfunctional item since their inception, people we who collect them are reduced to determining their appeal based on their looks alone. Collectors, myself included, have dedicated far too much headspace to ranking their favorite series based on subjective aesthetics, and most agree that the best sets, or at least the quirkiest, were those of the mid-1970s, when the Topps name really seemed to mean something. No avid collector would rank the 2014 set anywhere near the charming cardboards of that era; this year's set is the Matchbox Twenty of baseball cards. That is to say the cards are bland and inoffensive. Much like a Rob Thomas album, they are definitely not worth owning and something that should be shamefully hidden from all of your friends, much in the same way that you wouldn't dare tell anyone that you know all of the lyrics to "3A.M.," even though chances are they know them, too.

If this year's ordinarily derivative design looks familiar, it's because it is eerily similar to last year's. The contour of the ornamental lines are slightly different -- they swirl instead of horseshoe. The biggest change is that the team name is printed on the right-hand margin of each card, an unnecessary redundancy considering each card also has a team logo on it. While it's easy to poke fun at the lack of creativity at Topps, it's important to remember objectively that their card ingredients are as basic as Taco Bell's. It's the same meat, lettuce, batting average, and rookie facts and it's their job to try and mix it up enough that it feels new every time. (Adding WAR, of course, is their Doritos Locos Taco equivalency). 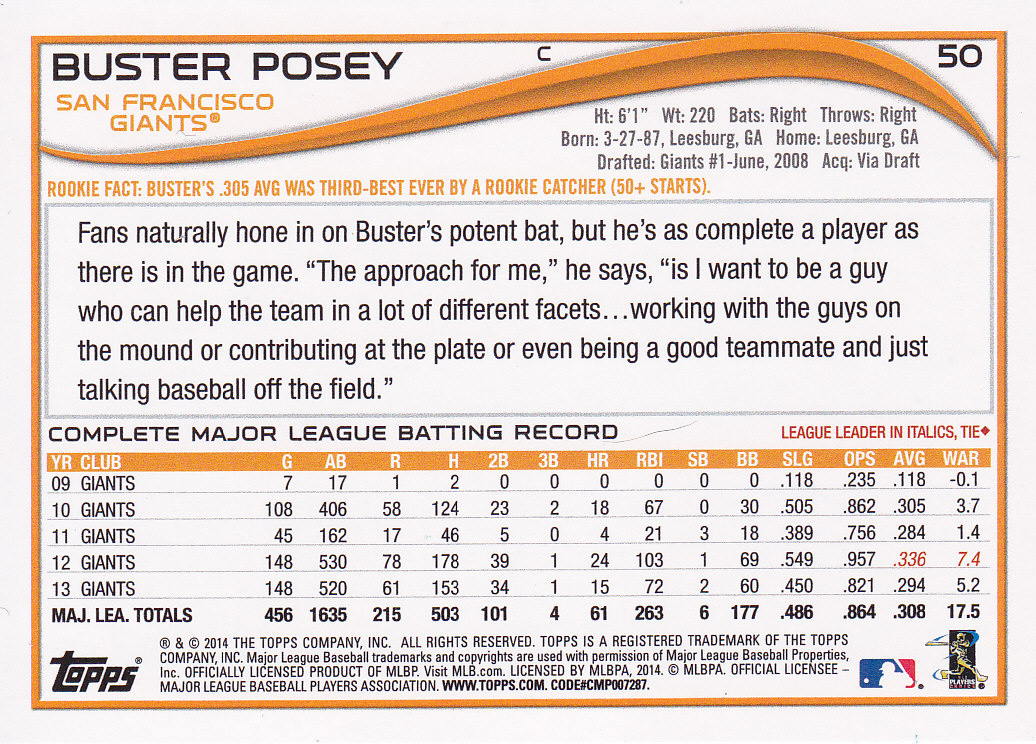 In a surprisingly progressive change, Topps has added WAR to the reverse of the cards.

The best news regarding this season's design is that Topps didn't regress to the hideousness of the 2012 set, which was easily the worst design of the past ten years. That year, the cards boasted blurry photographs that caused most players to look like SimCity characters and swirly colors and letters that made most cards impossible to read. Perhaps the bland predictability of this year's set is preferable if the alternative was another grotesque misfire, but you'll have to be the judge of that.

For the uninitiated, the way that these card series work is that each pack contains a mixture of cards. The majority of any pack are run of the mill baseball cards -- a picture of a player on the front and some statistics and a factoid (this set is obsessively focused on rookie facts) on the back. To break up the monotony, some cards have a different color background (I got a Cliff Pennington on a green background in addition to the four white ones), and some are what I like to call "sparkle cards" because they have a glittery background. This set also features an "Upper Class" card, which features the best rookies from particular classes, like Matt Cain from 2006, Cal Ripken, Jr. from 1982, and Matt Harvey from 2012. Topps also includes a few vintage reprints in case you might have forgotten how wonderful their old cards were compared to their current ones. 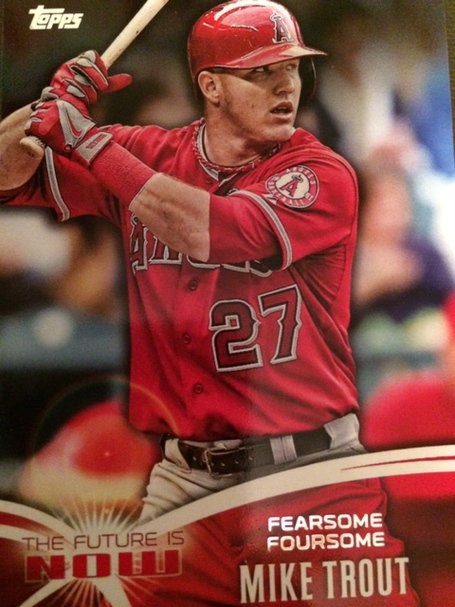 Some sets have themes, and this season's central theme is a celebration of the new wave of young talent in the majors. The poster child, quite literally, is Mike Trout. There is a featured subset within the 2014 series entitled "The Future is Now" which showcases some of the best youngsters in the game on red and blue cards with photographs that have been digitally enhanced to harshen the features of each player and to add ominous black shadows on everything. This series is the epitome of Topps' most common struggle: good ideas in the abstract that fall flat upon implementation.

The idea behind these cards is to take a young, talented player and commemorate their first game in the majors by attaching a cheesy headline on the front and printing the story of their first appearance on the back. Some are unintentionally funny. The Shelby Miller card, for example, reads, "A Franchise First" which isn't a nod to the fact that Miller was the first valuable pitcher ever to have been inexplicably disappeared for the playoffs, but rather the first start of his career, in which he, "spun the first one-hit, no-walk shutout with at least 13 strikeouts" in Cardinals history. 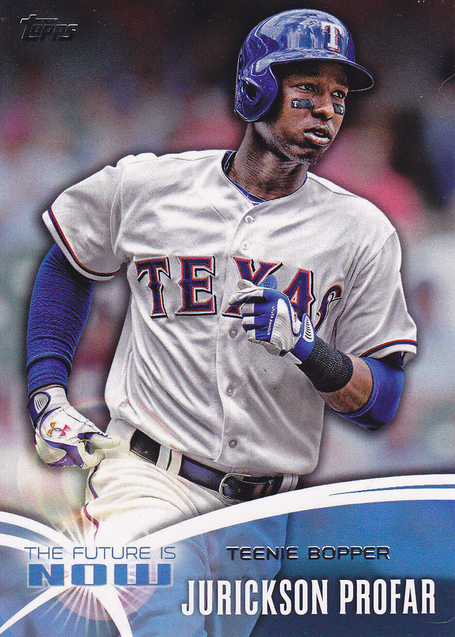 I didn't even notice these dorky headlines when I first stumbled upon the Trout and Bryce Harper cards (they read, "Fearsome Foursome" and "Harper's Hype Proves Valid," respectively) but started to pay attention once I got to the Jose Fernandez card, which reads, "Jose You Can't See," and Jurickson Profar's card, which reads (I feel embarrassed for him just typing this), "Teenie Bopper." The hokey headlines are bad enough, but since these cards are recounting events from the 2012 season rather than 2013, the cards feel quite stale.

One noticeable aspect of this year's set, which isn't a new problem, is the number of players who appear on cards still bearing last season's team assignment. I'm sure the cut-off date for printing is probably absurdly early and that's why players like Doug Fister (traded December 2) and Brandon Barnes (traded December 3) appear with their old team's name, logo, and un-Photoshopped uniforms, but I'm baffled as to the number of free agents like Jarrod Saltalamacchia, Brian McCann, Chris Perez, Shin-Soo Choo, and Mark Ellis who still appear to be playing for last year's team. The majority of these players, especially the good ones, will get a reprinted card in the next series, but it seems like the most obvious thing would be to leave free agents out of the first series of cards and get it right the first time. Then again, Todd Helton, who announced his retirement well before the end of the season, is featured prominently in this set with zero mention of his departure from the game, so who knows what Topps' actual baseball-awareness is these days. 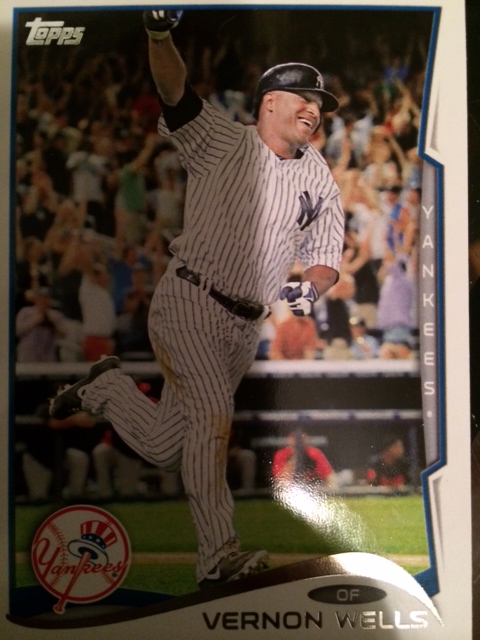 This card contains two misrepresentations: One is that Vernon Wells appears to have been bleached. The second is that he had a moment worth celebrating in 2013.

Finally, one of the reasons I purchased some 2014 cards was to see what they'd done with their numbering system. While some would argue that there never was a clear numbering system, there is enough evidence that for more than 40 years Topps wasn't just assigning numbers, they were ranking players that way. Last season, they stripped out the magic and gave most players a number that matched the one they wore on their uniform (Dustin Pedroia was card #15, Joey Votto was #19, and so on). This season, they did neither of those things, seemingly assigning card numbers via a random number generator. I'm not sure if I prefer this year's randomness to last year's blatant disregard for nostalgic integrity, but at least they added a little bit of the mystery back in.

This review will undoubtedly force Topps to put my face on dartboards around their office, but as I wrote in last year's installment, I just want them to get things right for posterity's sake. The serious collectors are disappearing, but that doesn't diminish the importance of baseball cards as one of the few consistent artifacts of the game. The cards themselves may wax and wane (mostly wane) in value, but they are one of the greatest chronicles of the sport. Even if the cards have never been perfect, when considered in that context they are elevated from a silly childhood hobby to one of greater historical significance. Topps sometimes treats their signature product as scraps of cardboard, but they're really selling scraps of time.