Why a Freddie Freeman extension, and why now?

The Braves handed their young first baseman a huge extension, and one look at the landscape tells you why.

Share All sharing options for: Why a Freddie Freeman extension, and why now?

The first base market is barren. That's one of the major reasons why the Braves bothered to extend their own first baseman, Freddie Freeman, for eight years and a shocking $135 million. Freeman could have been a free agent in three years, and if he continued on his current trajectory, likely would have been more expensive than the price the Braves paid, and then what was Atlanta going to do about first base?

You could say they could deal with it then, but that's some wishful optimism. With Freeman inked long-term, that's one fewer young first baseman who will be available as a free agent in the near future. Paul Goldschmidt is similarly locked up through 2018 with a club option for 2019, so cross him off of the list, and Allen Craig is with the Cardinals through 2017 with an option attached as well. Brandon Belt and Eric Hosmer have not been signed to extensions yet, but you can probably assume one is coming for the former given how the Giants spend on players they deem important, and the latter will likely end up expensive (and on another team) by the time his initial contract expires.

There just aren't that many intriguing young first basemen around right now, which is how we end up with Mike Napoli and his bad hip moving to the position full-time a year ago, the Mets continuing to see if they can squeeze something productive out of Ike Davis, James Loney signing a three-year deal, the Brewers taking chances on Mark Reynolds and Lyle Overbay in 2014, and the Rangers willingness to absorb Prince Fielder's lucrative long-term contract after a down season. Teams are doing what they can to fill the position, because it's still a highly productive one, but it certainly feels like a league-wide game of musical chairs where whoever comes up short has to play Yuniesky Betancourt at first. 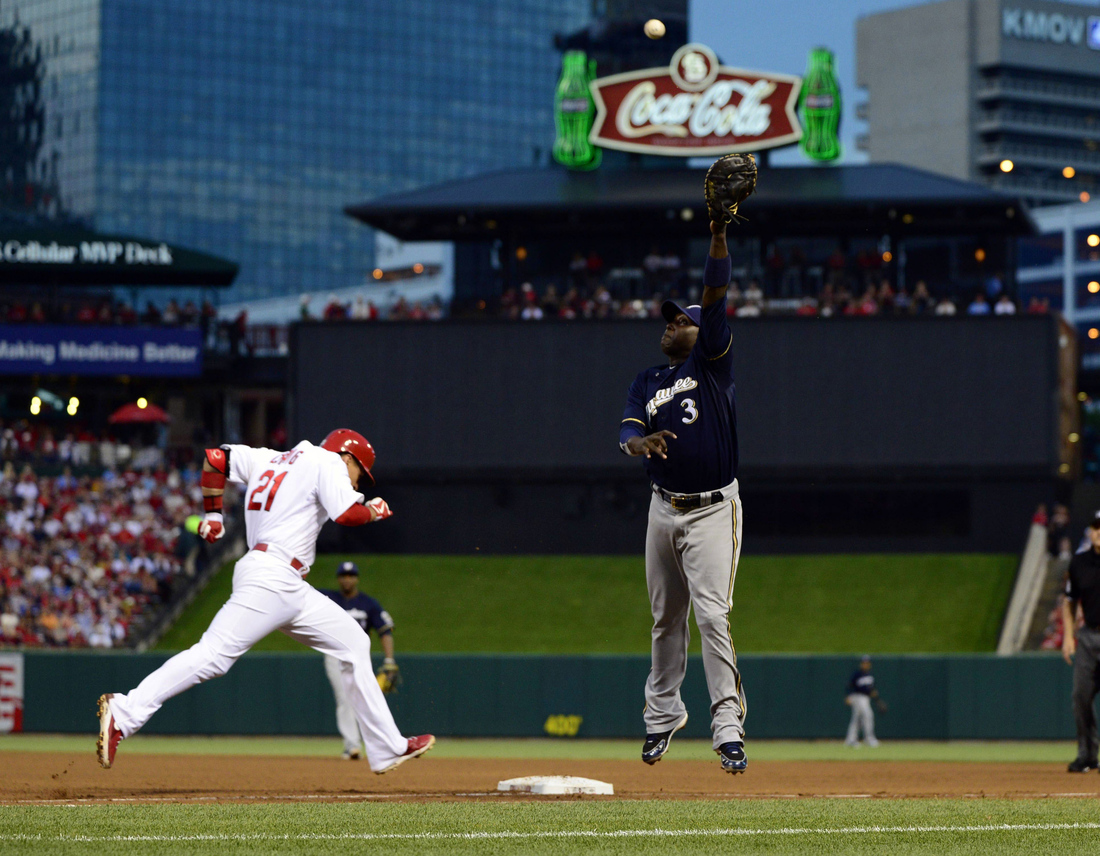 There isn't much help coming from the minors, either. Just one first base prospect, the Astros' Jonathan Singleton, ranks in Baseball Prospectus' top 101 list, at #25. MLB.com had to push things to make it to 10 first basemen in their positional breakdowns. Red Sox prospect Travis Shaw ranked eighth among all first base prospects according to MLB, but within Boston's own system comes in at #42 per Sox Prospects, sandwiched between two minor-league relief arms who might not have big-league careers. Shaw does have some potential, sure, but if he played any other position, no one would consider him for its top 10.

Other than Singleton and maybe the Mets' Dominic Smith, the top first base prospects of tomorrow are likely playing other positions today. To come back to the value of Shaw for a moment, the Red Sox have Garin Cecchini at third base, but if Will Middlebrooks secures the hot corner this year at the big-league level, Cecchini might end up shifting to first or left, depending on Boston's needs: there's a far better chance of this occurring than of Shaw securing a big-league future at first in Boston. Cecchini would likely be a fine first baseman, too, albeit a non-traditional one, as on-base percentage is his forte, not power. Teams are likely going to have to fill holes at first base this way if they can, though, that's nothing new, either: you don't want to have top first base prospects unless they're near major-league ready or have elite bats that negates their negative qualities, because it likely means they are deficient in one way or another and it's forced them to first early on. Hell, even Matt Stairs was a shortstop at one point in his professional career.

Five free agents who are still looking for jobs and don't have qualifying offers attached to them.

It's been a dry few years for the card designers at Topps. Does this year's model show any improvement?

So, with the free agent market looking grim -- everyone is young and locked up, or old and locked up, or old and why would you want to lock them up -- and the Braves' farm system (nor anyone else's) likely of much help at first in the future, Freeman has found himself signed for eight years and $135 million. The deal isn't without risk for the Braves, as Freeman's 2013 had a generous helping of batting average on balls in play on the side, and long-term, lucrative deals have inherent risk to them to begin with. It was a sound decision despite those potential problems, however, due to the nature of the first base market (as we've covered) and Freeman himself.

Freeman will be just 24 years old in 2014, and likely hasn't even reached his peak years yet. Had the Braves let his pre-free-agency deal run its course, Freeman would have been a free agent in time for his age-27 campaign, in line to make huge dollars on the open market before what could be his most productive years, and with the Braves likely unable to successfully negotiate for his services. Now, they have Freeman locked up into and through his peak years, keeping him around through 2021, and at a very reasonable average annual value of around $16.9 million.

He might regress a bit in the present, as a .371 BABIP isn't sustainable, but Freeman has also had lofty BABIP in the past (2011) as well as during his minor-league career: he won't necessarily drop all the way down to the league average in this regard. If all Freeman does is replicate his career numbers for most of this contract -- he owns a .285/.358/.466 line and 123 OPS+, and has averaged over three wins above replacement per season in his early years -- then he'll be earning his money in this market where the cost of a win on the free agent market just continues to rise. If he takes another step forward, or makes his 2013 campaign the norm for a time, the Braves will have themselves a bargain. As far as long-term deals go, this one is fairly low-risk, and that's about all you can ask for in a volatile game with an even more volatile market.

• Goldman: The Super Bowl is over, now it's baseball's time