Share All sharing options for: 3 Ralph Kiner moments from an overstuffed life

By now, you know the terribly sad news that Ralph Kiner passed away Thursday. Kiner was a giant of baseball history, beloved by almost 70 years worth of baseball fans. There is, correspondingly, not much about his life that isn't part of the public record in some way or another. Here are a few things that might not make the tributes to his immense talent as a ballplayer and his innate lovability as a broadcaster:

Somebody threatened to kill him on the field

This was in 1952, as Kiner pushed towards his seventh straight home run title and was famously making $90,000 a year. A blackmailer demanded $6,200 in small bills from the superstar outfielder. The threat against Kiner was made by a "swarthy, husky" Pittsburgh cabbie who claimed to be "a desperate and helpless man" who had lost money gambling and then started passing bad checks. "Faced with the loss of his home, the extortionist said he needed the $6,200 at once and if he didn't get it, he probably would go to jail." The note continued on, threatening to kill Kiner on the field if he didn't pay up, saying, "I'll shoot you and you'll make a good target in left field."

The FBI got involved and a lookalike agent made the drop in a cab at 3 a.m., but the extortionist never showed. Kiner played anyway, but allegedly told his teammates, "If anybody had shot a firecracker in left field all you would have seen out there would have been a pair of shoes." Joseph J. Bruno was later arrested at home for the crime and indicted. 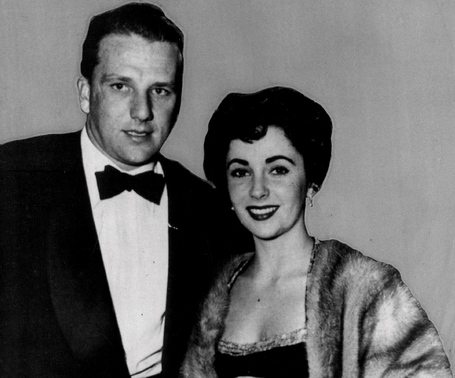 By dated, I guess I mean they went on one date, and it wasn't terribly successful. According to AP correspondent Will Grimsley, Kiner would tell the story when prompted about that date in 1949:

I drove over to pick her up at her home in the hills. She was still getting ready. I talked to her father, a nice guy, and her mother, a domineering woman. Then Liz [then 17 years old; Kiner was 26] entered the room. She was breathtaking. We drove to the Grumman Theater....

I got to meet Cary Grant and other movie stars. After the movie, everybody came out to get their cars. I gave the doorman my name. Limousines kept coming up and leaving. Liz and I just stood there fidgeting. I gave my name again. No car. Finally, I became impatient and yelled, ‘Where the hell is my car?"

"I'm sorry, sir," the doorman said. "What is your chauffeur's name?"

"Oh, in that case...your car must be in the lot down the street." So we trudged a couple of blocks. We drove to one of those fancy restaurants but I couldn't enjoy the food or the company. It was humiliating.

Right after that Liz married Nicky Hilton, the hotel tycoon.

Back in 1951, The Chicago Tribune reported that the Custom Tailors Guild ranked Kiner with the likes of Clark Gable and Dwight Eisenhower, beating out the Yankees' Phil Rizzuto, "based on his superior ability to wear clothes well, possibly due to his better physique." Kiner owned at least 30 slacks, 10 suits and 10 sports coats, and he loved argyle sweaters. And you think this winter's news cycle has been slow.

It's funny. Some people never seem to have anything to talk about. Kiner, on the other hand, never seemed to run out of stories. It's the measure of a truly full life that it feels like he still had so much more to tell us about, but we don't feel cheated because of how much we got to hear.