Byron Buxton, the next baseball great?

It might seem crazy to suggest as much for a 20-year-old minor-league outfielder, but Buxton's skills and future are legitimate.

Share All sharing options for: Byron Buxton, the next baseball great?

There is no question who baseball's best prospect is. His placement atop every worthwhile prospect rankings list out there was a foregone conclusion before the off-season even began, as no one out there -- not postseason hero Xander Bogaerts, not the next great Cardinal Oscar Taveras -- can match this outfielder's tools or potential. Byron Buxton, the 20-year-old Twins' center field farmhand, is not just the top prospect in the game right now, but has the potential to be the greatest active player in the game once his time comes.

More AL Central: Is there hope for the Indians' starting rotation?

That might sound like an exaggeration or extreme hyperbole, but that just goes to show how special Buxton's talents are. Buxton was drafted second overall in the 2012 draft, and the 18-year-old more than kept pace with Rookie League competition in his professional debut, earning himself the #10 ranking in the game courtesy Baseball America after just 189 plate appearances. Then came the 2013 season, when Buxton absolutely lit up both Low- and High-A, batting .341/.431/.559 in the former and .326/.415/.472 in the latter: he might very well do the same to Double- and Triple-A in this upcoming season, setting himself up for the majors by 2015 at the age of 21.

Those are just numbers, though, and if you should learn anything from scouts, it's that "scouting" numbers can be dangerous and deceiving. In this case, though, the figures aren't lying about his abilities. Chris Crawford, ESPN's MLB draft insider, told SB Nation that, if the Twins used Buxton in the majors right now out of High-A, he'd find success. "What makes Buxton such a special and unique prospect is that so many of his tools are so advanced. If the Twins wanted to, they could call Buxton up right now and he could hit .260, steal 30 bases, and play upper-echelon defense in center."

Lots of prospects could find success in the majors were they thrust there right now, of course. Xander Bogaerts is going to get his chance this season, and he's not much older than Buxton, and Taveras isn't far behind, either. It's what the players will do when they get there, both in the present and long-term, that separates Buxton from the rest, as Baseball America's Ben Badler explained to SB Nation. "Players like Xander Bogaerts, Addison Russell, Oscar Taveras, Javier Baez, Miguel Sano and some of the other best prospects in the game all could be perennial all-stars, but they also have flaws that you can see holding them back from reaching their potential. With Buxton, it's not just the elite potential, but how few weaknesses he has in his game, which is tremendously well-rounded and polished for his age. He should be contending for MVPs annually, and relatively speaking, he doesn't come with much risk, either."

What is this "elite potential" for Buxton? It's something of a nebulous phrase when just left out there for you to consume, but maybe it's better that way, since descriptions of Buxton's ceiling seem almost incomprehensibly positive in nature. According to Badler, Buxton is "the rare prospect with premium tools, outstanding upside and very few holes in his game. The bat speed is terrific, the swing is sound, he understands the strike zone, he hits all types of pitches and he has a chance to grow into plus power. A 19-year-old in his first year out of high school performing the way he did last year in the Florida State League is incredible. Then you throw in that he plays a premium position, is a top-of-the-scale runner with an above-average arm and the defensive instincts to be a Gold Glove center fielder, and it gets to the point where he sounds almost too good to be true." 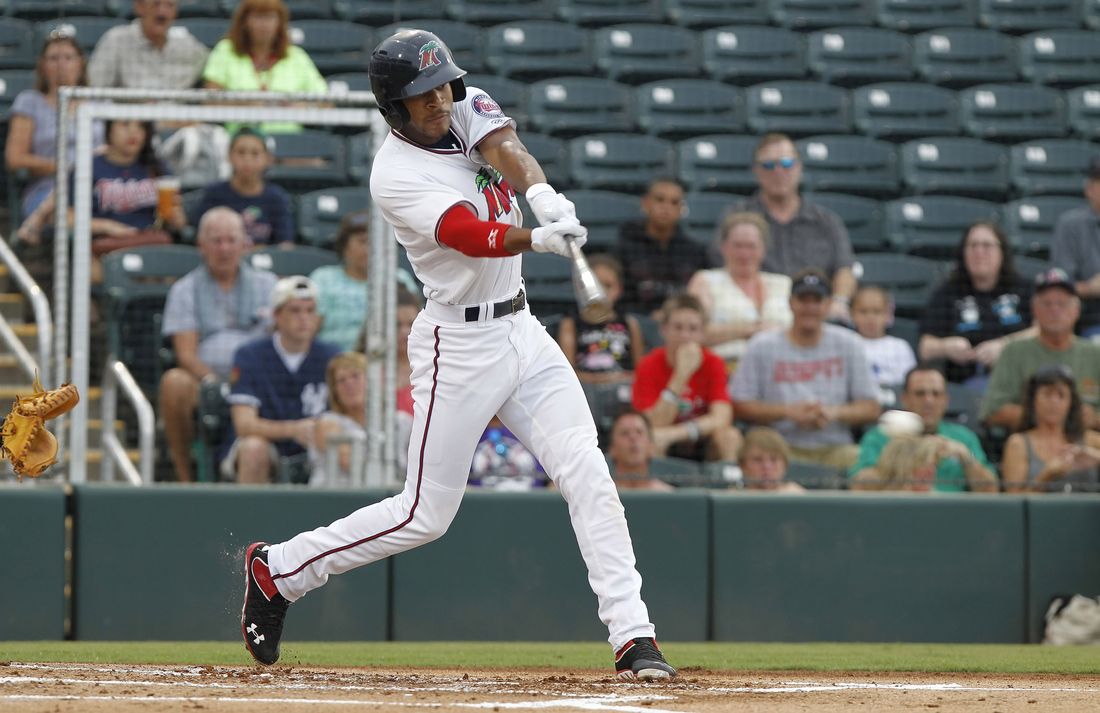 Let's focus on those tools for a moment. An American League scout explained to us that five average or better tools for a single player is "rare" -- you have a very productive, very well-rounded major-league player if they are capable of average-or-better batting, throwing, running, fielding, and power. Buxton's tools aren't average or better, however: they're all at least plus, and that is "nearly unheard of," per our AL scout. To top it off, Buxton isn't even just plus across the board: his defense in center and his speed are both plus-plus -- the ratings don't go any higher than that.

What kind of player and future do all of those incredible tools add up to? When asked what kind of ceiling Buxton had, a National League scout declared that Buxton projects as "a better player than Mike Trout", thanks to his collection of plus and plus-plus tools combined with "terrific" makeup that makes him a special talent like Trout. Imagine it, if you will: someday, Mike Trout could finally win an MVP award, and it could come in a season where Byron Buxton should have.

The ceiling dreams go a little further and more historic than Trout, though. Baseball Prospectus' Jason Parks told SB Nation that a non-Twins front office executive described Buxton's floor to him as Torii Hunter, and his ceiling as Willie Mays -- a Hall of Famer and one of the game's greatest talents and players in its long history. Parks went on to say that it's an "abnormal" ceiling and "crazy to suggest", but at the same time, "What if it isn't crazy?" Remember, for a moment, that Mickey Mantle ceiling comps for Mike Trout might have seemed similarly nuts at one time in the not-so-distant past, but now, so long as he stays in one piece, it seems almost obvious: sometimes, players are just that special, and invoking the names of Mantle, Mays and the like is just a more focused way of saying there is no ceiling for someone with this talent.

Buxton, of course, has a long way to go before any Mays or infinite-ceiling comp looks sane. That doesn't mean it's off the table for him, though, as the kind of player you get when you have someone with the potential to be this good in this many areas of the game is someone like Trout, or even Mays. He'll first have to conquer the upper minors, and then there's the actual major-league career to look forward to, but it's clear that, with all of his tools and his lack of weaknesses, Buxton is as prepared as anyone can be for the challenges of a big-league career. That's what makes him the clear-cut top prospect in the game, both now and likely next year, when he'll more than likely be ready to show us all what the hype is for.