Harper has achieved much in his first two years, but that's not enough for some people.

Share All sharing options for: Is Bryce Harper overrated?

Bryce Harper is heading into his age-21 season. He's one of the younger stars of the game, and is coming off of a year where injuries marred what was otherwise a lovely follow-up campaign to his historic rookie season. That apparently is not enough to earn him the respect of his peers, however, as an anonymous ESPN survey of 143 big-league players saw Harper named the most overrated player in the majors.

To be fair to Harper, he came in first with just 24 percent of the vote: it's not as if the surveyed players collectively despise him or think ill of his abilities, just that they felt that way about him more than anyone else. More overrated than the divisive Yasiel Puig (21 percent), and more overrated than walking headline Alex Rodriguez (14 percent) -- the same Alex Rodriguez whom 51 percent of these 143 players said they'd kick out of the Player's Union if they could.

We don't know why these players think Harper is overrated, but we can wager some educated guesses. He's been hyped since before he even showed up in the majors, and in reality even before he was drafted: Harper, along with teammate Stephen Strasburg, received some of the most thorough pre-draft coverage in recent memory, and possibly ever. Harper signed a major-league deal after his selection -- that was still allowed by the collective bargaining agreement at the time -- and was in the majors less than two years after the Nationals took him first overall, with all of 130 minor-league games under his belt.

He's been fantastic for his age, hitting a combined .272/.353/.481 as a 19- and 20-year-old: his 125 OPS+ from those two seasons ranks as the sixth-best ever at those ages, minimum 1,000 plate appearances, behind Cooperstown greats like Ty Cobb, Mickey Mantle, and Mel Ott, and ahead of Ken Griffey Jr. The fact that he's on the list at all is an achievement in itself: just 14 players ever have managed to amass 1,000 plate appearances between their age-19 and age-20 seasons, which speaks to Harper's precocious skills.

Maybe the surveyed players were just expecting more considering the hype. Maybe they aren't necessarily taking his age into account, or realizing the significance of his accomplishments. Maybe it's just easy to brush Harper aside when this same group selected Mike Trout, just one year older than Harper, as the best player in the game with a whopping 56 percent vote. It could be any number of those things, and while they're all understandable, it's still a little weird to see. 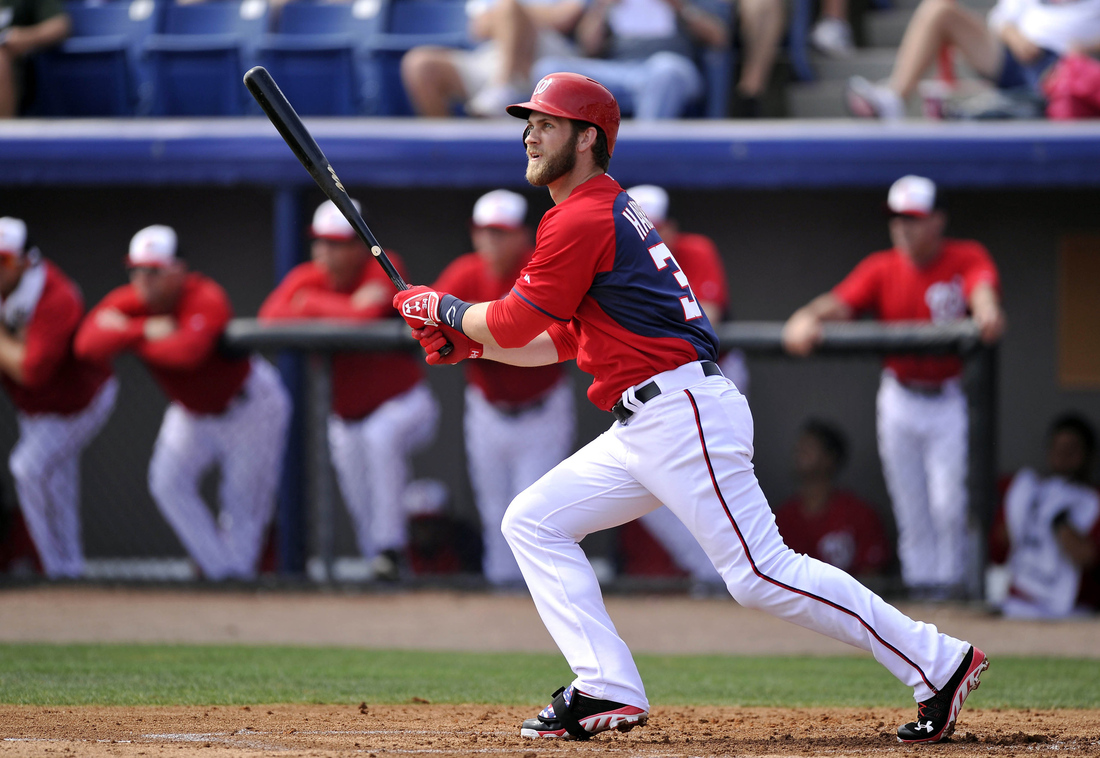 What's a little odder, though, is that some projections might agree he's overrated, at least on some level. Baseball Prospectus' PECOTA projects Harper to bat .266/.343/.454 in 2014, a line that's valued about the same as his rookie campaign's was. It's strange to project Harper for a step back, considering he improved his walk rate, cut down on his strikeouts slightly, and had a standard looking batting average on balls in play that doesn't raise any questions about his future performance. He'll be 21, is still growing physically as we noticed earlier this spring, and has another year of big-league experience behind him. What gives, PECOTA?

It's not just the baseline projection that seems to be stiffing Harper, either. His 90th percentile forecast, which is in essence the best-case scenario for his 2014, forecasts a line of .299/.380/.510. That's great, but it's not eye-popping by any means, as many of these best-case projections are. Who among you honestly thinks that's the best Bryce Harper can manage at this stage of his career? Besides the 34 of you who voted him most overrated, I mean.

It runs a little deeper than that, too, as PECOTA also features "Breakout" and "Improve" sections, which are essentially the system's way of telling you how likely these upper-level forecasts (or better) are. In Harper's case, his Improve Rate is at just 43 percent, where 50 is meant to say they're likely to hit their baseline projection. One year ago, Harper had the league's loftiest Improve Rate, at 83 percent, and he obliterated PECOTA's otherwise pessimistic forecast: this time, the system hasn't given him that added benefit of the doubt. As for breakout, Harper's is nothing special, at four percent, so PECOTA doesn't like his chances to produce above and beyond what its predicted for him.

In search of baseball's most snakebitten team

Not a search for the team with the worst injury problems, because typing "the Braves" wouldn't make for an interesting article.

Digging a deeper hole behind the plate

Left alone for too long, a lack of catching talent can be devastating to any team's chances.

This all seems weird, as said, but it all makes a kind of sense. As we've discussed, there aren't many comparables for Bryce Harper. Most players his age are still in the minors, not heading into their third big-league season with 1,000-plus major-league plate appearances already behind them. They aren't showing up on lists with Mantle and Griffey, and they aren't seeing their name mentioned in anonymous player surveys, either. All PECOTA, and any projection system, has to go on is comparisons. When there are few comparisons to make, it's difficult to accurately project a player.

Right now, PECOTA believes Harper's most comparable player is at 21 is Jason Heyward, who had a disappointing second season in the majors at 21. Gregg Jefferies' similar 1989 is also on the list, as is Jaff Decker's 2011, in which he didn't even play in the majors. Sure, there's also Mike Trout's 2013, Justin Upton's 2009, and Ken Griffey's 1991, but it's no wonder a high-ceiling forecast befitting Bryce Harper can't make its way out of PECOTA when the Jefferies and Deckers of the world are allowed anywhere near his projection.

It's not that PECOTA is underrating Harper, so much as it doesn't have the ability to properly rate him with the player pool at its disposal. Proper context can't be given where it's needed, because Harper is such a special snowflake of a baseball player that there's very little to measure him against. Give it another year and another season of evidence to work with, though, and maybe the system figures it out. And hey, maybe the players who think he's overrated will know what's up with Bryce Harper by then, too.