What appear to be mismatched moves by the Tigers' front office are anything but. Their plan isn't just to win now, it's to be competitive later as well.

Share All sharing options for: Why extending Max Scherzer was never part of the Tigers' offseason needs

To understand the Detroit Tigers' offseason, the first thing you have to do is let go of your preconceived notions about the team. Those notions, more often than not, have hindered those who make a career of analysis. For years, the Tigers have operated by their own set of rules, confounding pundits and fans along the way while all the time continuing to win games and make deep playoff runs. So if you think the failure to come to an agreement with Max Scherzer on a contract extension this month is anything but expected, you've probably misunderstood the team's offseason from the start.

The confusing offseason of the Tigers

If the offseason wasn't about keeping Max Scherzer at all costs, what was it about?

The confusing offseason of the Tigers

But first some history. It wasn't that long ago so-called experts predicted a fire-sale and all but handed superstar Miguel Cabrera to the Red Sox or Yankees because of a belief the Tigers would no longer be able to afford his contract. The evidence for a fire sale: In the offseason following a painful Game 163 loss to the Minnesota Twins in a one-game battle for the 2009 American League Central title, the Tigers traded all-star center fielder Curtis Granderson as part of a three-team deal with the Yankees and Diamondbacks. The Detroit economy was crumbling, the narrative went. Tigers president/general manager Dave Dombrowski had no choice but to begin trimming payroll. The market couldn't support a costly team any longer. It was fun, Detroit, but back to the cellar you go.

Except for one thing. The deal was never about a fire sale at all, and anyone who actually listened to the words coming out of Dombrowski's mouth or looked at the players coming back to Detroit would have known that.

"The reality is, no matter what, we needed to make some adjustments," Dombrowski said. "In almost any scenario, it's a necessity. But it's also one of those where we're in a very good situation with a quality owner that projects to have a really solid payroll as we go forward. But at some point, adjustments needed to be made, and this was the time to do it for us."

With that adjustment came the arrival of Scherzer, center fielder Austin Jackson, and relief pitchers Phil Coke and Daniel Schlereth. A "fire sale" that netted Jackson, an everyday center fielder with an above-average glove and a .278/.344/.416 line who has been worth 19 wins above replacement in four seasons, per Baseball-Reference. A "fire sale" that netted Scherzer, the 2013 AL Cy Young Award winner. Granderson in the four years since joining New York has a .245/.335/.495 line and has been worth 14 wins. Since that trade, the Tigers have won division titles, made three ALCS appearances and appeared in the World Series once. Some fire sale!

You want to understand the Tigers' 2013-14 offseason? Remember that word, "adjustments," because that's what it's all about.

At issue is that many want to place the Tigers into the "win now" box. Teams find themselves in that scenario for any number of reasons. Some have traded too many prospects and can't afford to remain competitive in the future. Others have superstars who are aging or nearing the end of a contract. They have a roster that for whatever reason will not remain the same for long. Those who look at those traits and see the Tigers aren't wrong. They do have a farm system ranked among the lowest in baseball after trading several players and losing draft picks to sign free agents. Their 2013 rotation, the strongest in the major leagues, featured a player (Scherzer) whose contract was set to expire after 2014, and another (Doug Fister) whose contract would expire after 2015. Add to that the upcoming contract expiration of Miguel Cabrera after 2015, and you could look at the upcoming season and declare the Tigers have to win in 2014 because their chance would never be that good again.

The Tigers' front office could have looked at it that way, too. It chose not to. It chose to believe the pieces were in place to compete for the playoffs not just in 2014, but for years to come. They just needed to make a few adjustments first. It's hard to argue with that. With a supportive owner whose family is civic-oriented -- and, oh, also happens to own large portions of downtown Detroit -- back-to-back seasons with more than three million fans coming to watch the team play and one of the largest television audiences in the sport, the Tigers should not be expected to wither and die. And that roster? 2012 MVP and AL Cy Young Award winner Justin Verlander is signed through 2019, and 2013 AL ERA leader Anibal Sanchez through 2017. The team has always believed it could get a deal done with Cabrera. It just can't do everything. So how do you use a strong core and extend your window into the future? Adjustments.

For the Tigers, the chief adjustments were trading first baseman Prince Fielder, saving a total of $76 million over the life of his contract while bringing all-star second baseman Ian Kinsler to Detroit through 2017, as well as moving Fister, who had a 3.67 ERA last season. It's that second deal that confuses people the most, especially the ones who predicted Scherzer would actually be the one put on the trade market. Understandable, as no one can quite figure out why the Tigers were content to settle for the return they got for Fister: infielder Steve Lombardozzi, since traded to the Orioles for Alex Gonzalez, left-handed reliever Ian Krol and left-handed starter Robbie Ray. The Tigers feel like they've reloaded with cost-controlled players who can help for years to come, just as they did four years earlier. Prospect watchers have questions about Ray, but the Tigers feel like he'll be able to step into the rotation in 2015 ... in place of Scherzer.

Because Scherzer, a player who only in 2013 began pitching like an ace, was never truly part of the long-term plan. The Tigers had hard choices to make, and understanding they couldn't keep Scherzer or find the return they needed, they sacrificed Fister for the long-term good of the club. 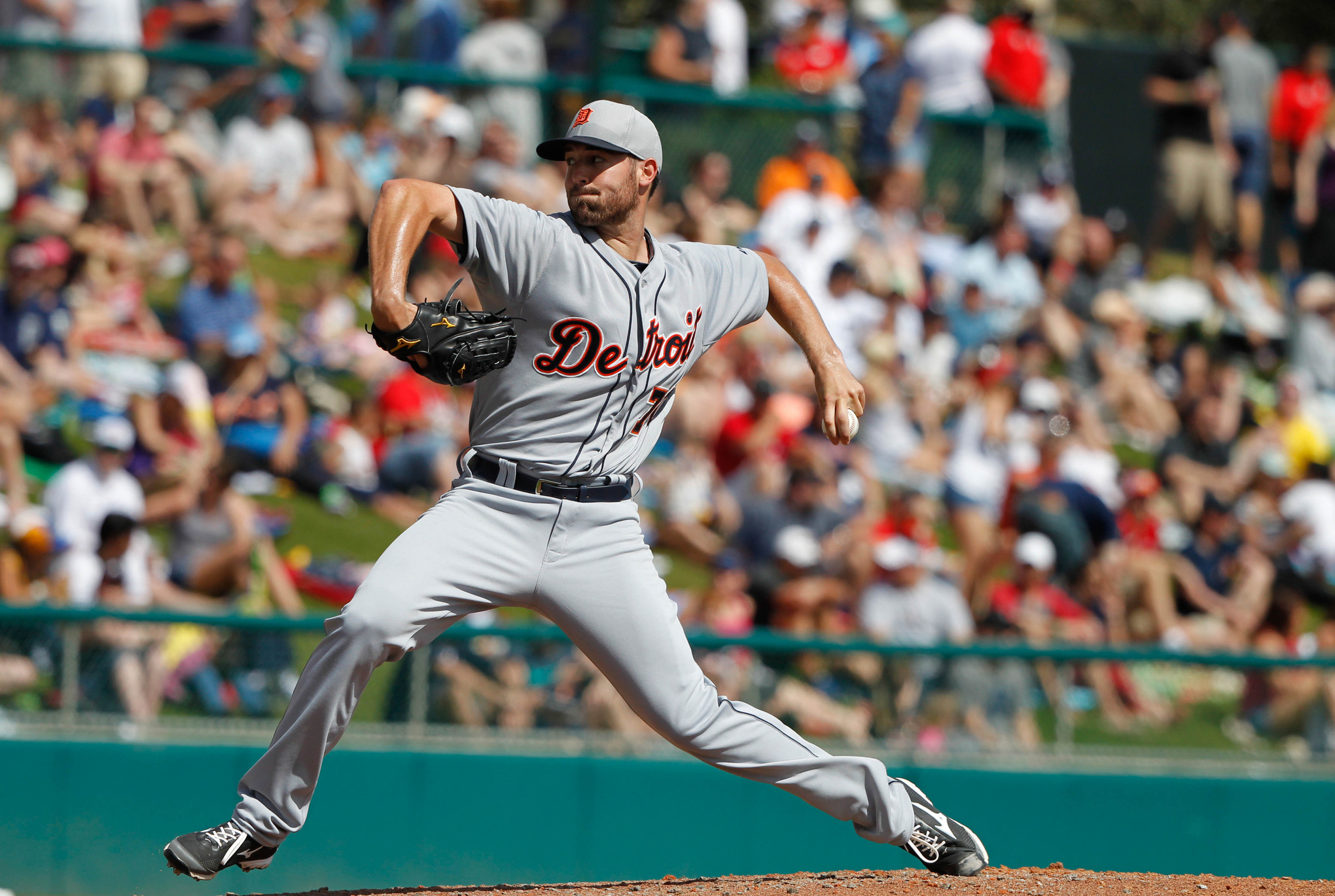 Via Chris Iott of MLive, Dombrowski spoke earlier this offseason about being careful handing out extensions:

"There's a difference between signing a player for a year at some dollars and then signing guys for six or seven years, and where you think they may be in their careers," Dombrowski said. "We just were in a situation where we created some flexibility and all of a sudden you have to be careful that you don't tie your hands in regards to flexibility, too."

Signing Scherzer to an extension of $24 or $25 million would have committed the Tigers to a rotation that cost about $67 million per year for just three players, and it's hard to run a club with so much money tied up in so few players. That's the definition of having your hands tied. The Tigers chose to trade Fister over Scherzer because they believed the return would be higher for a player with two years of club control and more surplus value than Scherzer, who has one year of control and less surplus value.

Knowing their budget has a ceiling, the Tigers managed to cut costs while creating a plan for continuing to compete in the future.

Now the Tigers' rotation has $42 million for two starters beginning in 2015, with Ray expected to join the low-cost Drew Smyly (3.29 ERA, 3.17 FIP, 18 career starts in 83 games) in creating the core of the group for years to come. Whether you believe this is a good idea clearly depends on your feelings about Ray and Smyly. The Tigers, however, with a successful track record of evaluating young pitching, are high on the duo.

What appears to be a confusing offseason was anything but. Knowing their budget has a ceiling, even if that ceiling is higher than most other clubs, the Tigers managed to cut costs while creating a plan for continuing to compete in the future. It seemed to work: They're favorites to win the division, and Las Vegas odds makers favor them to make it to the World Series. You may not believe in the Tigers' plan, but your beliefs really don't matter to them. They've been too busy making playoff plans to pay critics any heed.