In which the sportswriterly urge to take umbrage conquers all.

So, we're going to do all this again. Before there has been a meaningful baseball pitch thrown on North America in the year 2014, before anyone has gotten past the ambient school's-out giddiness phase where Opening Day is concerned -- before all that, right now, we are going to have another awful conversation about Yasiel Puig. Good. That's really good, and we should definitely do this. 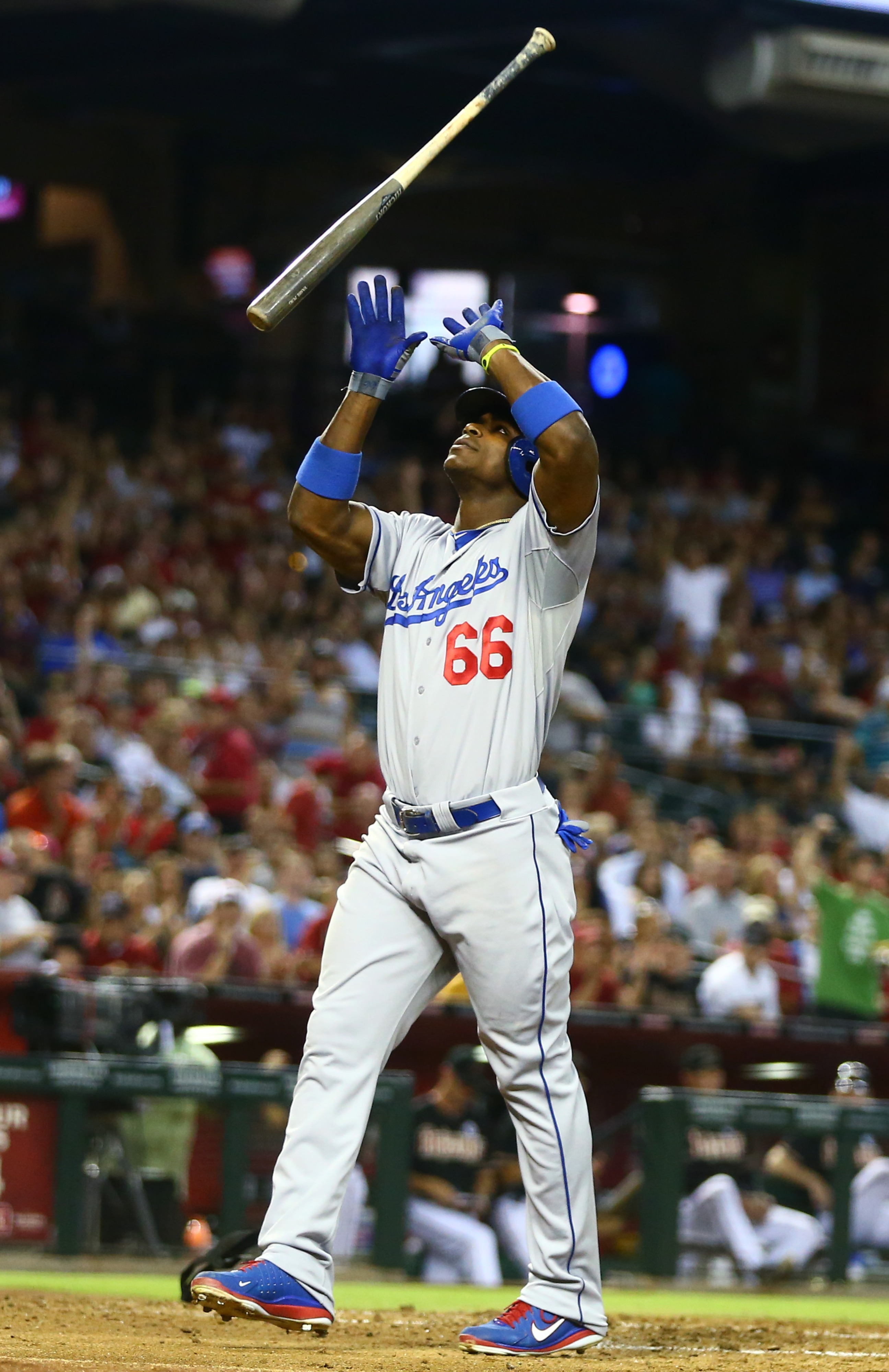 This difference is a neutral thing, and objective: Puig palpably does not play baseball the way other baseball players do, and does not act the way other baseball players do. Some observers will love him unreasonably for this, and others will dislike him beyond reason for this. But, while Puig's brilliant oddness occasions all those responses, the conversation pretty quickly stops being about Puig and starts being about itself. This is really more of an awful conversation around Yasiel Puig, carried on by people keen on using Yasiel Puig as a way of having another awful conversation.

These deal with bigger topics, but are also only barely conversations. There are ways that we can use the fraught relationship between baseball's fundamental conservatism and Puig's wild individuality and general unbridled Puig-ness as a way to talk about various things, of course. That might even be an interesting thing to do. But that is not what Bill Plaschke is talking about when he writes a column in late March describing Puig as an unbearable affront to team chemistry, authority, truth, and the American Way. It's not why a grandiose magazine writer and a beat writer rage at the uncredentialed masses, with Puig's status as Giant Howling Asshole as a pretext.

By pumping up an ostensible power struggle between Dodgers manager Don Mattingly and Puig, Plaschke is dog-whistling a derp-symphony on authority and -- subtextually, if not exactly subtly -- race and ethnicity. The magazine writer and the beat writer are plainly more exercised by the idiocy of Twitter's unwashed and Those Blogging Kids than they are about Puig himself. Lord knows that the hell Buster Olney is about, here:

One other thing re: Puig coverage: Accusing reporters you don't know of being racist because of their color is nothing less than racism.

...but it sure seems like Buster Olney's desire to see himself as the adult in the room is a big part of it.

This is the Internet, finally, and maybe that's all it is. Everyone performing and everything performative, a cacophony of individuated riffs on an ostensible object that's quickly swamped and sunk by the weight of all those leaden takes. It's dispiriting to see an interesting subject like Yasiel Puig so subsumed by all these less interesting characters moving upstage bellowing "well, actually" and changing the subject to something more like what they wanted to talk about all along.

If we only get to read so many words in a lifetime, then it's worth wondering how many of those words we want to give to people who can only talk about themselves.

I want the actual fascinating, maddening, unpredictable thing, not a newspaper columnist exorcising his Raging Facebook Uncle issues with impertinent young people or a magazine writer wearily reiterating that bloggers ain't shit. I would prefer watching or even thinking about Yasiel Puig to any of that, if given the choice.

The good news, though, is that we do have a choice. If we only get to read so many words in a lifetime, and we do, then it's worth wondering how many of those words we want to give to people who, when presented with a fascinating baseball player, can only talk about themselves. Soon enough, we'll have baseball to watch and talk about. These other conversations won't stop, and the people intent upon having them over and over again will not ever really want to stop having them. But soon, we'll at least have something else to watch.