Sometimes fate saves you from your own ineptitude. 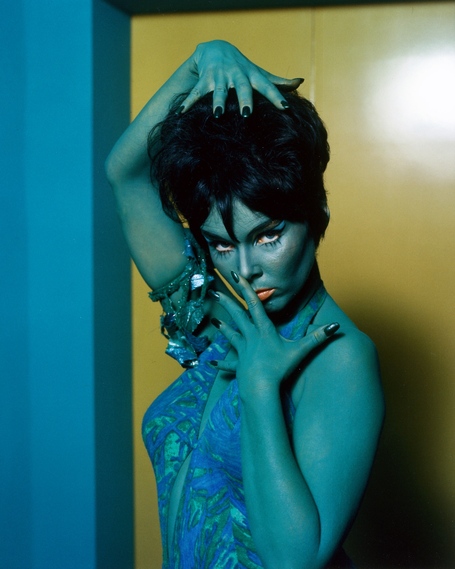 I am at that dangerous, unpleasant, and wholly unsought after age at which I am just the right vintage to have learned quite a bit of mangled philosophy and ethics from "Star Trek." I watched the original 79 episodes religiously, learning that giving up your freedom to a computer overlord is a bad thing, even if all that computer asks of you is that you have lots and lots of sex. In "Star Trek II: The Wrath of Khan," Spock says over and over again, "The needs of the many outweigh the needs of the few or the one," a statement that, as it turns out, is highly controversial among philosophers and something he was probably wrong about, an argument best illustrated by the "fat man on a footbridge" problem -- the presumably innocent "one" has an inherent right to go through his life unmolested even if chucking him off the Brooklyn Bridge would accomplish some greater good.

Conversely, when Admiral Kirk, invoking Shakespeare or Virgil or Batman or someone, says, "May fortune favor the foolish" in "Star Trek IV: The Voyage Home," he is saying something perfectly reasonable, because we live in a capricious universe in which we sometimes prosper despite our most errant decisions. Case in point: the 2014 New York Mets and their initial plan to de-emphasize glovemaster Juan Lagares.

One of the main questions Terry Collins, Sandy Alderson, and the rest of the Mets gang had to address was how to sort out their collection of outfielders. Curtis Granderson may have ceased hitting as of August 1, 2012 (from then until now he has hit .211/.295/.430 in 116 games, not including his postseason 3-for-30 in '12), but having hit 43 home runs as recently as that year he was a lock. Chris Young, the former Diamondbacks and A's outfielder, was another sure thing for reasons that remain nebulous -- a career disappointment, Young is a good glove with a bit of a power ‘n' patience push to his low batting averages, but a great deal of the former was the product of playing in Arizona (career .254/.326/.465 in Phoenix, .224/.311/.409 on the road) and he was coming off a season in which he hit .200/.280/.379 in 107 games. A career .262/.363/.474 hitter against left-handers, Young might have made a good platoon partner for Granderson, who has had only intermittent success against southpaws in his career, but more than that seemed a stretch. 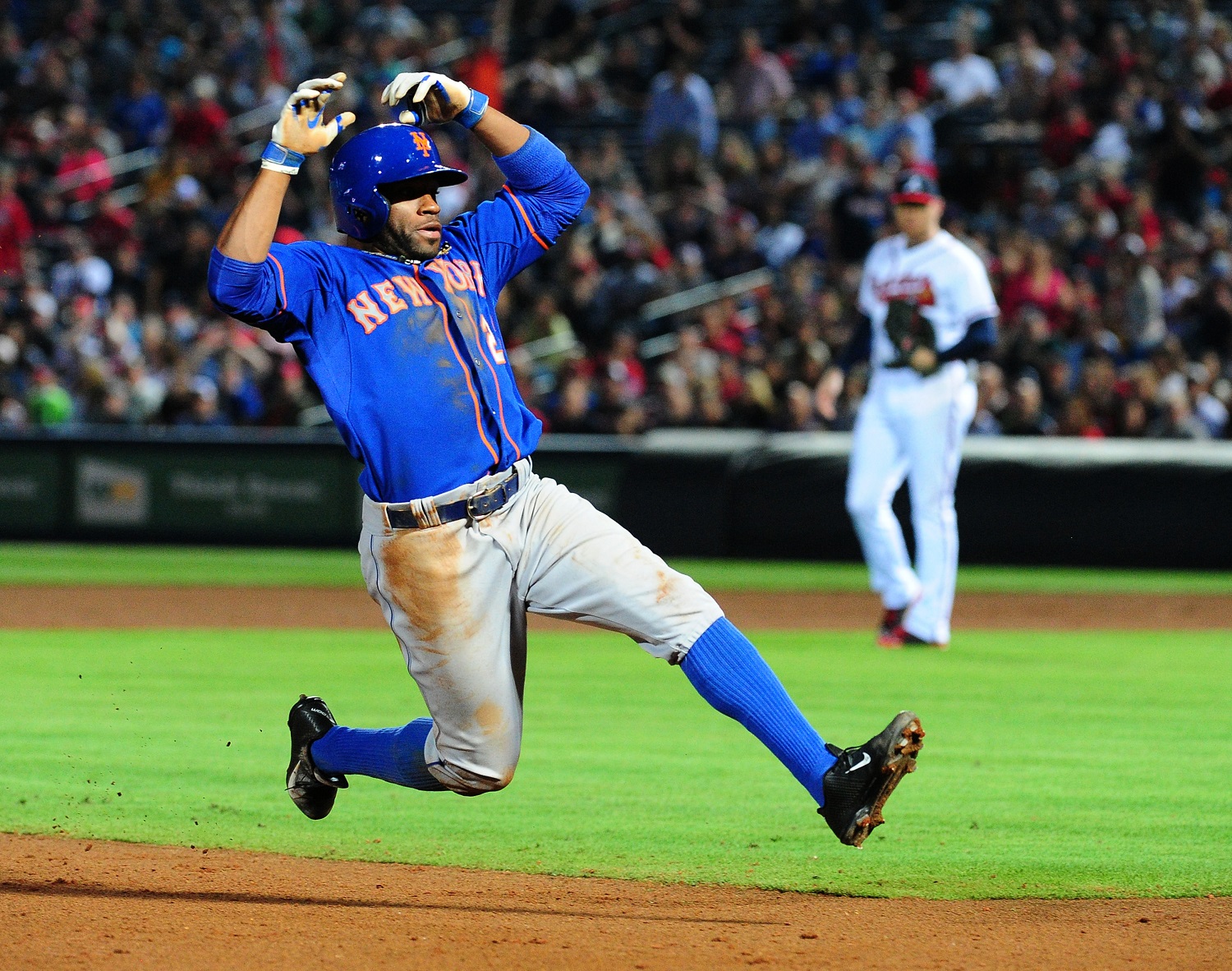 Still, these acquisitions, longshots though they might have been, made sense because the Mets' aggregate outfield production in 2013 had ranked dead last in the National League. What was less clear was the team's fascination with Eric Young, Jr. Acquired last June, Young managed to lead the NL in stolen bases given 46 bags swiped between his two home offices, but he hit only .249/.310/.336 (79 OPS+), numbers wholly inadequate for a corner outfielder, stolen bases or not, and perhaps even if the outfielder in question is an above-average defender. Young's not bad out in the pasture, but has yet to be compared to Tris Speaker or Virgil or Batman -- or Juan Lagares, who does.

Twenty-five years and with a very limited minor league hitting record (.282/.322/.405) Lagares came up last April and immediately impressed with his outstanding range in the outfield. He hit only .242/.281/.352 in 421 plate appearances. That too was good for a 79 OPS+ -- swinging the bat, he was about as much a part of the problem as Young was. In the field, though, holy moley, as Captain Marvel used to say. Lagares was outstanding in the field. Pick your defensive metric of choice -- Baseball-References's fielding runs says he saved 30 runs, or about three wins' worth, above average. Fangraphs says +25.

As Braves' shortstop Andrelton Simmons (.248/.296/.396, +41 fielding runs) showed last year, if you're an elite glove, you can mitigate a mediocre bat. The Mets didn't seem to care. Terry Collins wanted ol' EYjr up at the top of his order for his speed, even though the top of the order isn't really about speed so much as it is about rewarding your best hitter with playing time, your leadoff guy being the player who hits more often than anyone else on your team. "All's I know is what an impact this guy made on our team when we got him," Collins said of Young, who arrived in New York via a trade with Colorado last June. "When he got on, exciting things happened, and we scored runs."

Correlation isn't causation, Terry, unless there's always a computer overlord standing nearby when you're having some extremely unlikely sex. As Yogi Berra said, you can observe a lot by watching. In any case, Young has led off in eight of nine Mets games at this writing.

Fortunately for the Mets, Bill Shatner's "Star Trek IV" invocation came into play at that point and fortune indeed favored the foolish. Chris Young injured his quadriceps and disappeared to the disabled list, giving Lagares a chance to play. The Mets as a whole are hitting .198/.273/.323. Young is hitting .226/.286/.323. Granderson is hitting .125/.263/.313. Lagares is hitting .303/.351/.515 and is catching flies just like, well, flies. Fate -- and Lagares -- have bailed Collins et al out of their own limited thinking. Well, he has at least to a point; the team is only 4-5 after all.

Young is playing in extended spring training games and is progressing towards an April 18 return. The Mets now have one of those "good problems" in that they can sit one of their two outfielders who is not hitting. Granderson, signed for four years (another "Holy Moley!" for that one) ain't going to be the guy that's benched, and presumably Lagares has hit and fielded well enough that not even Terry Collins can insist that a guy with five stolen bases but a 600 OPS deserves to play more than he does. Maybe.

To the Mats with Eduardo Nunez hate mail

There's one problem with that last scenario: Lagares is almost certainly not going to be hitting .303 when Chris Young comes back, be it when he's first eligible on the 18th or at some point after that. He's just not that kind of hitter. Again, if his defensive play is as good in '14 as it was in '13, that won't matter. You put better hitters on the outfield wings to support him, and you let him do his part with the leather, taking any offensive output as gravy. If Baseball-Reference's fielding numbers are to be taken at face value, Lagares' 2013 was the ninth-greatest defensive season by a center fielder of all time, and he got there in fewer games than anyone else in the top 20. Would only the Mets look on that kind of gift and want to bench it? It's tempting to say so.

Arguably the Mets have already botched that "better hitters on the outfield wings" part, but that's irrelevant to Lagares. You let him be what he is. You let him catch as many balls and even if he stops hitting you let him go on to the point where the negative returns on his hitting cross the positive returns on his fielding. Judging by the record included in the link above, they have a long, long way to go before he reaches that point. The evidence for that statement is in the value delivered by players such as Gary Pettis, Paul Blair, Mike Cameron, and Darren Lewis in years in which they didn't hit at all but still were positive-WAR players, often worth two or more wins above replacement, due to their great glovework -- and in Lagares' season last year. He was worth nearly four wins.

In other words, he ranked among the top-25 outfielders in baseball last year. Who cares if he slumps? Who cares if Chris Young comes back and needs at-bats? Who cares if Eric Young steals bases? How many Youngs does one team need, anyway? Collins and Sandy Alderson spent the offseason not noticing Lagares' value. Now that he's virtually the only Met hitting, maybe they'll twig to what they have... But if their fans are skeptical, you really can't blame them. 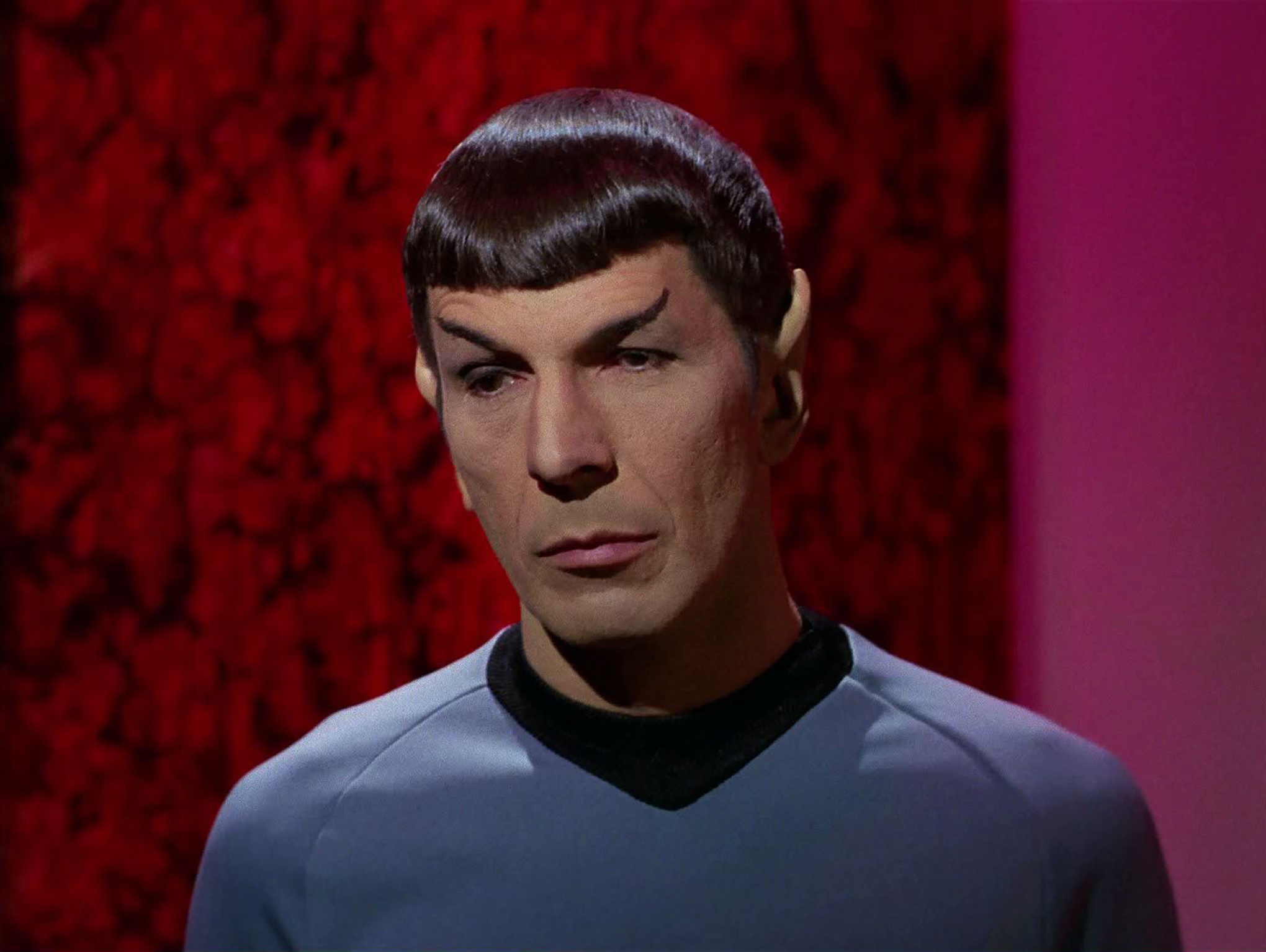