The first-place Brewers are for real

The rest of the NL Central will know this soon enough.

Share All sharing options for: The first-place Brewers are for real

You might be surprised to see the Brewers in first place in the National League Central, and why wouldn't you be? They had a poor 2013 season, and while they did have a productive winter, it wasn't the kind that makes you sit up and notice if you aren't already invested in the Brewers. The truth, though, is that they weren't all that far off from being a legitimate contender in 2014 thanks to the moves they did make: all they needed was for things to go according to plan for once.

A year ago, the Brewers' rotation should have been great, as it featured Yovani Gallardo, Kyle Lohse, Marco Estrada, rookie Wily Peralta, and Mike Fiers, who had surprised but had been great in his 2012 rookie campaign. Lohse and Estrada were as good as hoped, but Gallardo was horrendous for months, Peralta took a few lumps too many in his first full season, and Fiers threw just 22 innings in the majors all year, resulting in Tom Gorzelanny as the pitcher with the fifth-most starters for Milwaukee with just 10.

The lineup also should have been productive, but Corey Hart didn't step to the plate once thanks to lingering issues in both knees, and Rickie Weeks continued his rapid descent from all-star to gaping chasm in the lineup. This led to a first base situation involving Juan Francisco, Yuniesky Betancourt, and Alex Gonzalez, three light-hitting infielders who should have exactly zero time at first in their career: predictably, they combined for lineup-killing production, batting .206/.259/.370, nearly 40 percent worse than the average first base output. As for Weeks, he collected 399 plate appearances en route to his career-worst OPS+ of 82, a season that helped lead to the loss of his starting gig in 2014.

They also lost Ryan Braun to a 65-game suspension for his involvement with the anti-aging PED clinic, and third baseman Aramis Ramirez only appeared in 92 games thanks to continual knee problems. Despite all of this, the Brewers still finished with a league-average offense in the NL (spoiler: almost all the good lineups were in the AL) thanks to strong efforts from the likes of catcher Jonathan Lucroy and explosive center fielder Carlos Gomez. So long as Milwaukee could solve the issues at first and second while having both Braun and Ramirez around more often than they were in 2013, they had a very good chance of producing one of the better lineups in the National League. 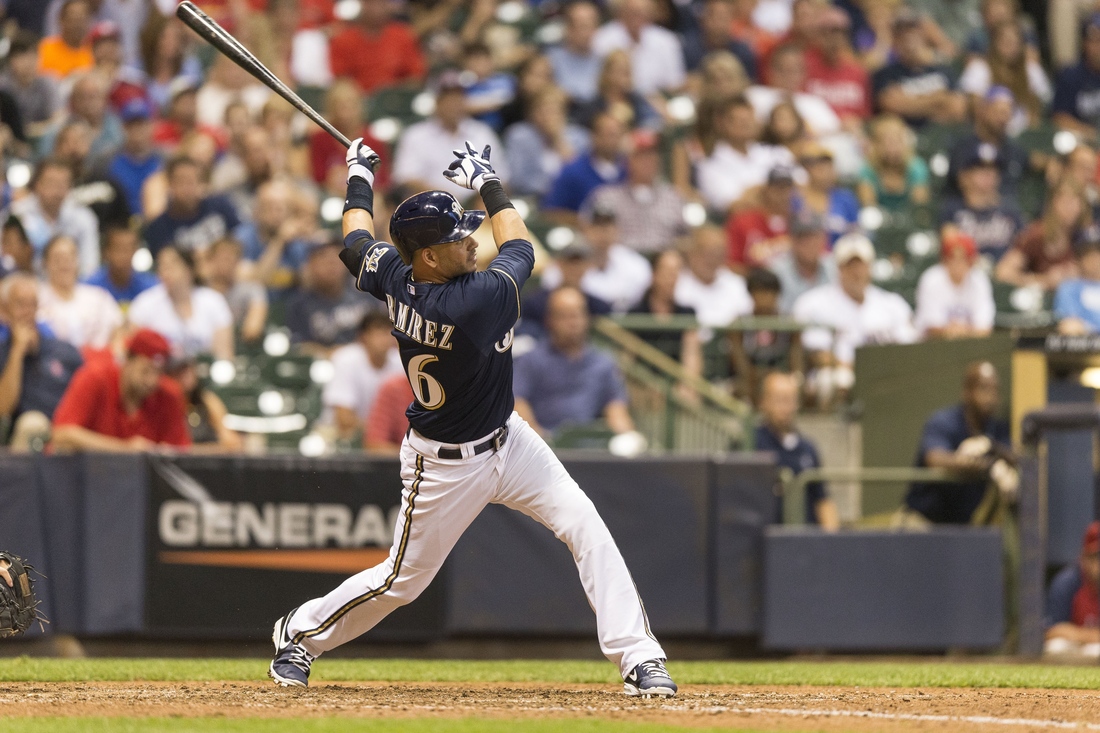 Ramirez has quietly been one of the game's better hitters for a decade. Photo credit: Tom Lynn

Second base still seems to be in flux in 2014, as Scooter Gennett is disappointing offensively to the same degree Weeks was a year ago, but both Braun and Ramirez are playing and mashing and Mark Reynolds is helping out at first base in a way no one was capable of last summer. Sure, the Brewers would probably like better than Reynolds' current .198/.286/.459 line, but it's good for a 97 OPS+ thanks to all that power: considering what they're upgrading from, that'll do, especially if Lyle Overbay either picks up the slack in his starts there, or stops getting time at all.

Milwaukee also needed a reliable fifth starter to add to what was a strong, but still-lacking base on the pitching side. While Matt Garza is no ace, he's an above-average starter who has a history of success in the National League, much like Lohse, who was signed a year prior. Garza, Lohse, Estrada, and Peralta in his sophomore year had the makings of a high-quality rotation, but it would be an even better one if Yovani Gallardo was able to pitch more like he did in the second half of 2013 than in the first, more like the Gallardo of old.

During the offseason, Eric Young, Jr. turned to a Phoenix-area hypnotherapist for help. That's not the #LOLMets part.

Astros promote George Springer. Who is he?

Getting to know one of baseball's top prospects.

Who's hypnotizing Eric Young Jr.? Astros promote George Springer. Who is he?

To this point, he's accomplished that goal, with 13 strikeouts against three walks and just a pair of runs allowed in three starts. It's difficult to overstate how much better the Brewers are when Gallardo is able to pitch like that, and given his pre-2013 history as well as his post-DL numbers from last year -- in which Gallardo posted a 2.41 ERA, limited opponents to a 604 OPS, and struck out nearly three times as many as he walked in his final 52 innings after recovering from a thigh strain -- there's no real reason to assume they won't see the productive version of Gallardo for the duration of the season. If Garza, Lohse, Peralta, and Estrada pitch to their recent capabilities, and Gallardo takes his place as the rotation's top starter, then the Brewers have one of the best rotations in the game from top to bottom.

Winning nine games in a row, as the Brewers have already done in 2014, doesn't mean all that much, other than that those wins are in the bank and can't be taken away. The Blue Jays, who finished 74-88 and in last in the AL Central, rattled off 11 wins in a row in 2013, the second-longest such streak in the majors that year. The difference between the Brewers and the Jays, though, is that Toronto's push came far too late after they had already dug themselves a hole they couldn't climb out of, with a roster that just didn't have the talent to keep it going. The Brewers are starting off the season by winning, and are doing so before they've even reached their maximum potential on the offensive side. So long as some of the early concerns in the lineup don't stick around long enough to become actual problems, the Brewers should remain contenders in the NL Central. The Cardinals, who just took two of three from the Brewers while ending their nine-game winning streak, are the only team that is clearly superior right now, as they have fewer questions in the lineup to deal with, and their typical Cardinals' depth to lean on. If by mid-season, however, Reynolds is still hitting for power, Gennett has picked up the slack at the keystone, and Khris Davis has started to remind everyone of why they were excited about him and his power last year, then it's maybe a topic worth debating.