A staggering 25 different pitchers have had Tommy John surgery in 2014, including several big names.

Share All sharing options for: What's with all the Tommy John surgeries?

When word got out Padres starting pitcher Josh Johnson would require a second Tommy John surgery, Yahoo! Sports' Jeff Passan wrote that Johnson's would be the 22nd known case of the operation in 2014 alone. That number has since increased to 25 major and minor league players, according to a list maintained by Jon Roegele (@MLBPlayerAnalys on Twitter), with Yankees starter Ivan Nova representing the latest addition.

Twenty-five. That's a staggering number, one that has sparked widespread conversation as to whether pitcher injuries have reached "epidemic" proportions. Clearly that is an inherently hysterical reaction, but one thing is for certain: never before have so many big-name hurlers been afflicted at one time.

Johnson and Nova are far from the only frontline-quality pitchers destined to go under the knife. As Passan notes, Matt Moore, Kris Medlen, Brandon Beachy, Patrick Corbin, Jarrod Parker and Johnson's teammate, Cory Luebke, are pitchers who were at or near the top of their team's rotations when they got hurt. Add recent Tommy John surgeries on highly regarded pitching prospects like Jameson Taillon and Dylan Bundy as well as an operation last year for Mets phenom Matt Harvey, and it's no wonder it seems as if something strange is afoot.

Matt Harvey has a message for elbow injuries

No one is allowed to have fun on the Internet.

Matt Harvey has a message for elbow injuries

But what is the problem, exactly? Are more pitchers actually getting hurt, or is the high number of victims this season just an anomaly?

One current major leaguer thinks pitchers are getting overworked in their athletically formative years, and that it's leading to problems when they get older.

"Kids are getting run into the ground," Yankees reliever Shawn Kelley recently told Andy Martino of the New York Daily News. "I have so many people that I talk to who are like, ‘Hey, my 15-year-old is having elbow problems, and I'm just like, how? How are you having elbow problems when you're just a kid?'"

Dr. James Andrews, an expert on Tommy John surgery and all things sports injury-related, seems to agree with Kelley. In an interview with Mike Ferrin and Jim Duquette on Sirius/XM Radio's "Power Alley" last week, Andrews said the increased TJ surgery numbers is a trend.

"The big risk factor is year-round baseball ... and number two is playing in more than one league at the same time, where rules don't count" the renown doctor said. Add the high workload to incorrect pitching mechanics, Andrews added, and it seems to be a recipe for ligament damage. "Throwing breaking balls at an early age is still a problem because young kids can't throw it properly so the mechanics get them."

The information from Andrews, as well as Kelley's theory, helps to explain the rise in arm injuries, but why are so many of those escalating to a major operation like Tommy John surgery?

One possibility is that simple rehabilitation of an elbow injury presents a lot of variables. For one, trying to pitch through pain can result in undesired changes in mechanics. Both of those things, of course, usually lead to ineffectiveness, and there's always the risk of further damage. As such, when there's an option on the table that has a tremendous success and recovery rate, people tend to pay attention.

when there's an option on the table that has a tremendous success and recovery rate, people tend to pay attention.

Eighty-three percent of the 216 pitchers who underwent Tommy John surgery from 1986 to 2012 returned to pitch in the majors, according to a study published in the American Journal for Sports Medicine (via Newsday), and 97 percent at least made it back to the minors. Those figures don't account for the fact that the surgery is much more advanced now than it was in the earlier years of the study. Knowing what we know about modern-day medicine, the success rate in more recent years is likely much higher.

The generally favorable outcome has largely resulted in players agreeing to undergo the surgery without fully exploring their other options, according to American Sports Medicine Institute research director Glenn Fleisig. "A lot of times, because Tommy John surgery is so good, the pitcher, the team, the dad or whatever will say, ‘Hey, let's just do it and get it over with,'" Fleisig told Martino. That type of outlook seems to carry over to young pitchers at the MLB level, and contract status could be a big reason why.

Of the 14 players on MLB rosters who needed Tommy John surgery in 2014, 13 have yet to hit the open market during their careers. Johnson is the only one who has been able to test the free-agent waters, and previous injury issues spoiled what likely would have been a pretty serious bidding war for his services. So, really, none of these pitchers have had a chance to receive a truly big payday, so having what might realistically be a 90 percent chance of being able to return to the highest level to prove their worth is, by all accounts, an offer most players can't refuse.

Just as younger players might have the temptation to default to the surgery to improve their earning potential, guys like Johnson and Peter Moylan might be inclined to skip lengthy rehab and other means of healing the UCL injury and elect to undergo the operation in an attempt to prolong their careers. That's especially the case for Moylan, who is 35 years old and can't afford to deal with setbacks or further injuries as a result of trying to rehab without corrective surgery or pitch through pain. 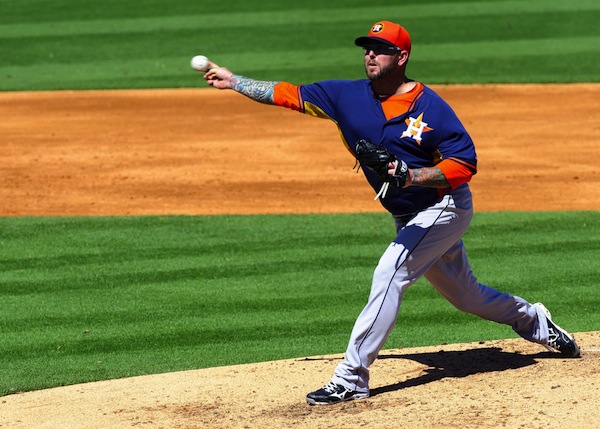 If nothing else, the sheer volume of these injuries and subsequent surgeries might force teams to come up with different ways of using their pitchers.

In 2012, the Rockies responded to injuries and ineffectiveness by instituting a "piggyback" pitching system, carrying four starters and several long relievers with the intention of having two pitchers take on a traditional starter's workload over the course of a game. That team wound up losing 98 games, but the idea itself was praised by many, even if the execution was not.

Two years later, the Astros began using a similar tandem system, according to SportsNet.ca's Shi Davidi, putting it into place in the minor leagues as a development tool. At this point, the team doesn't plan to carry it over to the majors, but they're also not ruling out the possibility of doing so someday, general manager Jeff Luhnow told Davidi.

Houston might not necessarily have to experience on-field success for the plan to work. If it proves to limit major arm injuries, the system might be lauded as triumphant anyway -- especially if the current rash of elbow problems continues to plague rosters throughout the league. Because, while it could just be an anomaly, there is too much of an investment -- and winning is too important in this era of instant gratification -- for teams to stand idly by while pitchers continue to drop left and right with arm problems.