Grading the unwritten rules: Jed Lowrie and bunting with a big lead

Were the Astros right to be upset when Jed Lowrie bunted for a hit against the shift?

Share All sharing options for: Grading the unwritten rules: Jed Lowrie and bunting with a big lead

You are here to read about and discuss unwritten rules. Allow me to tease you with what happened after an unwritten rule was broken last Friday.

Oh, man. On a scale from one to 10, whatever happened must have been a "dedicating 'Purple Rain' to another man's wife at karaoke." Look at Bo Porter freak out! He is so dinged-danged mad. 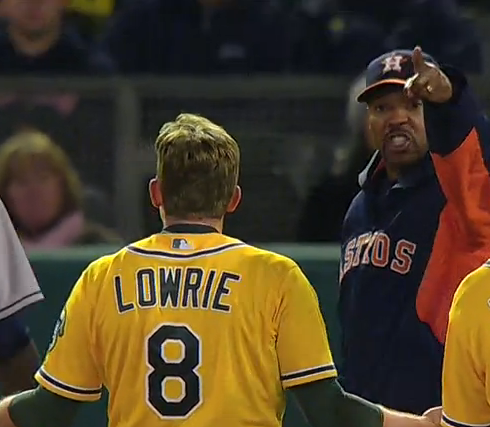 Now, there's more context, of course. The A's were up by seven runs when Lowrie attempted to beat the shift with a bunt. Figuring out how many runs a team is up before they should stop trying to reach base is an inexact science, but seven is a total that unwritten lawyers usually agree on without a lot of dickering. Except there's more context for that context. It was the first inning.

It was the first inning.

To be absolutely clear, it was the bottom of the first inning, so the Astros had just eight innings to score seven runs.

To be absolutely clear, it was the bottom of the first inning, so the Astros had just eight innings to score seven runs. But the Astros have scored seven runs after the first inning in a game this year, and they did it against Felix Hernandez and the Mariners. The Astros employed a shift because they wanted to prevent runners from reaching base, but then they got upset when Lowrie wanted to reach base.

This is my least favorite kind of unwritten rule, which I guess makes it my favorite, in a way. It's just so danged silly. The Astros announcers called Lowrie "selfish" on two different occasions, suggesting he was bunting to pad his stats and not trying to help his team win. They suggested that when Porter sent the cooler flying, that he was trying to send a message to his troops, trying to give them an inspirational speech.

Here, I can help with that:

Bo Porter: Dammit, they're rubbing it in your face. They're disrespecting you. GET FIRED UP, PEOPLE. They know we can't win.

Porter: No, no. It's over. Anyone in this dugout who reaches base for the rest of the game is going to sit tomorrow, that's a promise. Stop trying. We lost. Have some respect for the game.

Jason Castro: Check this out. FanGraphs says we still have a three-percent chance of winning. That's not a lot, but still entirely possible.

Porter: You think you're better than us with your numbers, Johnny Stanford? It's over. It's like that "Animal House" quote. Was it over when the United States stormed Normandy? Yes, for all intents and purposes, it was.

Castro: No, the quote is "Was it over when the Germans bombed Pearl Harbor," and …

Porter: You idiot, the Germans weren't even close to Hawaii. Now go sit down and stop trying to win because it's impossible. It's over.

If you're upset with Lowrie trying to reach base in the first inning, you're upset because you think the game is over. If you don't think the game is over -- which you might show by, say, employing the strategy of an infield shift to prevent more runs from scoring -- then your problem is that the A's should have been satisfied with their seven runs and given the Astros a gentlemanly chance to get back in the game.

Reminder: The A's are expected to contend. It is entirely possible to win or lose a division by a single game, as the A's themselves did by beating out the Rangers in the final game of the 2012 season. Missing the playoffs could be the difference in millions of dollars of revenue. It could be the difference in a World Series run. They can't afford to figure out the proper way to keep trying in the first inning of a game that counts. There is no room in baseball for a team to stop trying to score by any means possible when there is even a scintilla of doubt about the game's outcome. There's no clock in baseball. That's one of its most beautiful attributes. A team down 12 runs in the third inning can come back.

An early-season travesty is revised back to historical norms.

This season, 140 different teams have scored seven runs or more in a game. Yet Lowrie was supposed to try to score only within the boundaries of some invented decorum, regardless of the Astros trying as hard as they can to catch up? Bonkers. Absolutely bonkers.

The worst unwritten-rule-breaker of the bunch? Easily Paul Clemens, who threw at Lowrie three times. Here's an unwritten rule for you: You get one shot. Maybe two. Wing it behind him, send the message, and move on. If the reason you're throwing at him is especially egregious, maybe you get an additional shot at his buttocks if you miss the first time. Maybe.

Three times over a period of a week? For a first-inning bunt? Get outta here. I give Lowrie a 1 for trying to get a hit against a defense designed to prevent him from getting a hit, and I give Clemens an 8 for not giving up after he failed at the butt-chucking the first two times.

If you're still trying, so is the other team. That's an unwritten rule for you. Stop being so sensitive, baseball people.