What kind of contract would Jose Abreu sign now?

Jose Abreu is a monster. What kind of contract would he get if he were a free agent today?

Last year, you weren't aware of Jose Abreu. This year, you're worried about him hitting your melon head over a fence as you walk to your office. He doesn't mean you any harm; that's just his nature. That's how quickly your perception of the baseball world can change. Welcome to Major League Baseball, Jose. Help yourself to some dingers.

When the offseason started, everyone knew Abreu was one of the only power bats on the market, but no one really knew Abreu. Scouts suggested he had something like 60- or 70-grade power on the 20-to-80 scale, but so did Mike Hessman. So does Giancarlo Stanton. So did Wily Mo Pena. So did Reggie Jackson. So did …

Jed Lowrie and bunting with a big lead

Were the Astros right to be upset when Jed Lowrie bunted for a hit against the shift?

Jed Lowrie and bunting with a big lead

The power wasn't in dispute. Abreu's ability to employ it in game situations against major-league pitching was. Four weeks into the season, we have a pretty good idea of that ability. He can do it early and often. Considering what we've seen so far, his six-year, $68 million looks like a steal — that kind of annual salary might get you an average outfielder, but it isn't going to get you a bonafide slugger.

The question today is this: What would you want your team to sign Abreu for if he were a free agent today?

Before you answer, let's break down the list of players who have hit 10 or more home runs in the first month of a season.

Everyone knows to be wary of April stats. You can probably rattle off a list of a dozen April legends without a lot of effort, starting with Tuffy Rhodes. April means something; April doesn't mean everything. But not only is it exceptionally rare for a player to hit 10 home runs in the first month of the year, but it's even rarer for that player to not be in the middle of a long, substantial major-league career.

Get your checkbook out. Don't be stingy with those commas. 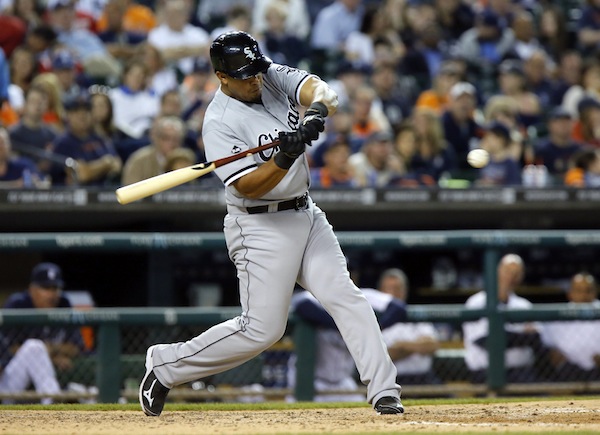 Hold on, though. The dingers are great, but Abreu also has trouble making contact, striking out in 22 percent of his plate appearances on the young season. He's swung at 39 percent of the pitches thrown out of the strike zone so far, 10 percent over the league average. Now consider that there isn't really a book on him yet. Pitchers don't know if he has a hole above his hands or if he just can't quit those danged bouncing sliders. He hasn't had to make the adjustment to the league's adjustment. Not yet. Valar adjust.

So let's break down that list a little differently:

And wouldn't you know it? That one player is one of the same players who didn't have a single All Star appearance. That's not irony, and it's probably not coincidence. It's almost impossible to fluke into 10 April home runs, but it's possible to use a combination of small samples and league unfamiliarity to fake it. Here are the splits for the player in question that year:

Goodness. Even better than Abreu in April, at least as far as average and OBP. This player played his last game in 2010, despite being the same age as Jose Bautista and Jonny Gomes*. Even a six-year, $66 million contract to this player would have been a disaster.

Basically, what I'm suggesting is that Jose Abreu could be Chris Shelton.

It's almost impossible to fluke into 10 April home runs, but it's possible to use a combination of factors to fake it.

Wait, don't eat the checkbook. Just write "Void" all over the check and tear it … OK, fine, you made your point. And I made mine. The chances are pretty good that 10 home runs in a month are a sign of hard-to-find power, and that power usually translates into something that can at least be useful for a while (think Vinny Castilla), if not much more. But there's still a chance of April shenanigans.

Adjust your price accordingly. Remember that it's April. Don't be fooled by April. Don't even consider it. I wouldn't even offer him a deal if I were you. He's probably just Chris Shelton. I can't believe you were paying attention to April stats. You do this every year. Just walk away.

Now with you out of the picture, I'll sign him to a seven-year, $105 million deal because this guy's awesome. So many dingers. All hail Jose Abreu.

* The other player with 10 or more April homers without an All Star appearance. Full list.