Bryce Harper thumbed out of game until July

Surgery to repair a torn ulnar collateral ligament will be necessary to restore the tyro outfielder to the field of play.

Share All sharing options for: Bryce Harper thumbed out of game until July

To bury the lede, Nate McLouth fans nationwide can rejoice, because he, Tyler Moore, and Steven Souza are going to see a lot more playing time from now on. According to a report by ESPN columnist Keith Law, what initially seemed like a minor left thumb injury to Nationals outfielder Bryce Harper will instead result in surgery to repair a torn ulnar collateral ligament. He's expected to be out "until at least early July" according to Law's sources.

Harper had injured the thumb diving into third base to finish a three-run triple on April 25. As was the case last season, when an encore to their 98-win 2012 was expected, the Nationals have had to deal with more injuries to key players than even a good team can typically bear. Last year it was Wilson Ramos (who should get frequent-disabled list miles), Ryan Zimmerman, Jayson Werth, Danny Espinosa, and Harper, among others. The current disabled list includes Ramos, Zimmerman, Scott Hairston, and Doug Fister. Denard Span has also missed time.

McLouth was signed for this sort of emergency after last season's injuries resulted in too much unrewarding playing time for Steve Lombardozzi (now with the Orioles), Roger Bernadina (Reds), and Moore. McLouth has been a frustratingly inconsistent player in his career. Still, as a career .258/.345/.439 hitter against right-handed pitching, he might at least hold up his end of a left-field platoon. Moore is an interesting problem because as a right-handed hitter with power, he would make for an obvious partner. He hit .247/.307/.473 against southpaws in 101 plate appearances against them in 2012, but basically hasn't touched them in 87 PAs over the two years since. This is all small-sample territory, so it's not clear what Moore's real ability is, and as long as he's a platoon outfielder he's not going to get much of a chance to show what it is. In the minors he was largely a low-average hitter with real power but only a passing acquaintance with the strike zone.

Continuing Davey Johnson's Lombardozzi-heavy tradition of emphasizing versatility over actual production, manager Matt Williams has suggested that he will initially opt to make utility infielder Kevin Frandsen (21 career games in the outfield) McLouth's platoon partner. A 32-year-old .259/.316/.357 career hitter, Frandsen does boast career .288/.343/.429 rates against portsiders, but keep in mind that these were compiled in short stints in 2012 and 2013, and that last year National League right-handed hitting as a whole hit .259/.323/.411 against southpaws. In essence, Frandsen is hardly the traditional "lefty-masher" short half of a platoon. Rather he's more of a lefty light spanker, titillating for some, boring for others, and in both cases likely not damaging in a significant way. Williams' other options hold more possibility. 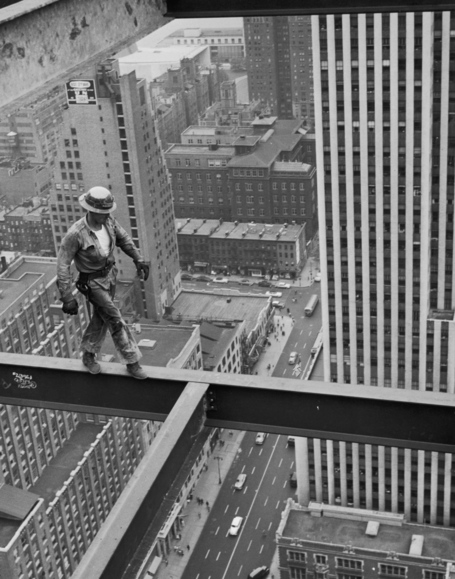 Another platoon or even full-time possibility is 25-year-old outfielder Steven Souza, the former third-round draft pick (2007) who was rated the organization's No. 10 prospect heading into the season. Slow to get started on the actual-hitting part of his career, Souza hit .297/.366/.572 in 97 games split between A- and High-A ball in 2012, then followed up with 81 games of .297/.396/.548 in 81 games spent mostly at Double-A Harrisburg. The shortened season is attributable to an oblique injury, which makes him the quintessential Nationals player -- promising, yet friable. Still, should McLouth prove to be overly mediocre or Moore fail to hit, Souza could march into some extended playing time.

Regardless, none of the possible solutions will be as good or as exciting as a healthy Bryce Harper plying his trade, but all of us, whether we be baseball players, lion tamers, or high-altitude construction workers, must at some point in our lives learn that diving head-first is a very bad idea. Harper now knows; all that remains is to wait.