Is it time to worry?

Share All sharing options for: 5 good players having bad seasons

A partial list of players who dominated last April:

A partial list of players who were miserable last April:

In between were things you expected — Miguel Cabrera was excellent last April because he’s excellent, and Pete Kozma was struggling at the plate because he wasn’t. But at the risk of spoiling the thesis of my 5,000-word, interactive longform piece titled "Maybe April Statistics are Deceptive," I’m going to suggest that we might not have the full picture of how the 2014 season is going to play out.

Here are five good players who are struggling early in the 2014 season. Our mission is to see if there’s anything to be worried about.

Prognosis
Looks like the bulk of Sandoval’s at-bats have been poor, and he hasn’t had a hefty batting average on balls in play to make up for his standard, wild approach at the plate. He had a whale of a finish last year, having a big September with ample power. This year, the Giants haven’t seen the full figure of what he can do.

Wait, he’s trim now? Well, hot dang, that sure ruins half of my best zingers. He's a best-shape-of-his-life story that’s true. And having watched every inning of Pablo Sandoval baseball, I can confirm that he looks great. He’s on this list because of the weak bat, but he’s actually in positive WAR territory because of his defense, which certainly passes the eyeball test. He just can't hit.

The scuttlebutt is that he’s pressing for a new contract and trying too hard. Except, I’m not sure that’s even remotely true.

He’s on this list because of the weak bat, but he’s actually in positive WAR territory because of his defense.

I figure a pressing Pablo Sandoval would swing at a thrown bag of peanuts in the upper deck. The problem isn’t the aggression; it’s that Sandoval is having trouble making contact, swinging through way more pitches. He made contact with 84 percent of his swings last year, and that’s down to 75 percent this year. He's also popping up a ton of balls. Maybe he needs time to get used to the different set of counterweights on his body.

Random month like this that no one paid attention to because it wasn’t April:
June, 2011, in the middle of Sandoval’s best overall season. He hit .269/.286/.373 before going bonkers for the rest of the season.

Scouting the worry tool (20-to-80 scale)
50. A fair amount of worry. It would be one thing if you could just point to his .208 BABIP and close the case, but the missing contact is a little worrisome.

Prognosis
Here’s some cognitive dissonance for you. You see those stats up there? He’s basically Rafael Belliard or Felix Fermin right now. Yet he’s ninth in all baseball in WAR according to Baseball Reference. That’s how good his defense has been. If you’re wondering if a wonky shoulder is better than a wonky knee, here’s at least a little evidence in support of that. Heyward is a center fielder playing right, and he’s doing tremendous.

But there’s no way the shoulder isn’t still bothering him. From SI.com:

According to data kept by STATS Inc., through April 25, Heyward had seen 55 pitches that qualified as "up and in," delivered either to the upper left ninth of the strike zone or slightly north or west of it. He had swung at 22 of them, and those 22 swings had produced zero hits.

That’s not the player who came up and amazed us all in 2010. He’s a month older than George Springer, so it’s not crazy to think of Heyward as something akin to a top prospect still, even if it feels like he’s a veteran who should be carrying the Braves by now. If he can put the bat together with his otherworldly glove, he’ll be … wait for it … a star. Not just a WAR star, because he’s been doing okay in that respect, but a star star. Just like he was supposed to be in the first place. 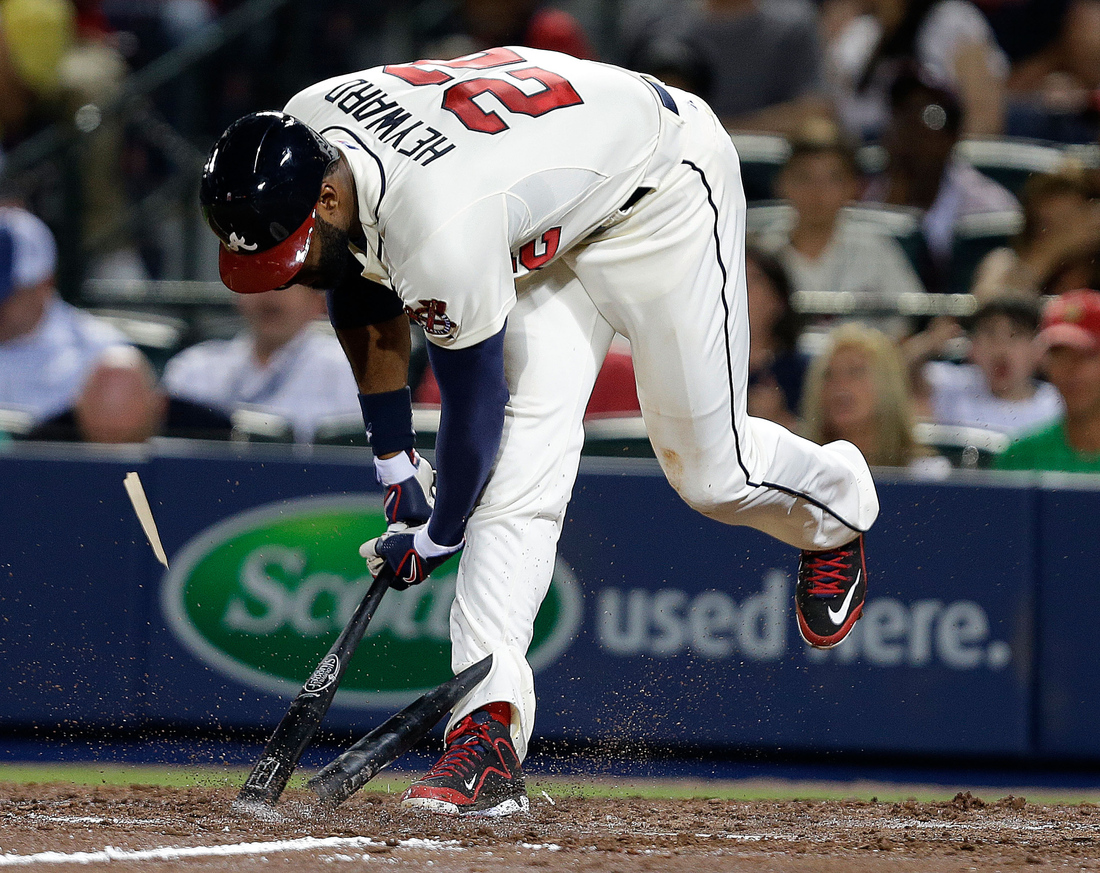 Wait, I see a technical problem with his swing mechanics (Photo by Mike Zarrilli/Getty Images)

If you’re looking for positive signs about that potential development, though, you’re gonna need a bigger microscope.

Random month like this that no one paid attention to because it wasn’t April:
May, 2012, in the middle of one of Heyward’s better seasons. He hit .200/.315/.389 before a magnificent June.

Scouting the worry tool (20-to-80 scale)
60. He’s not going to hit .206 all year, and his defense makes him invaluable, but maybe his ceiling really is more Gerardo Parra than Willie Mays.

Prognosis:
He’s 30, which is right around the time Ryan Howard started to disintegrate. Fielder is kind of the anti-Heyward, in that he needs to hit like a Hall of Famer in order to be valuable. He’s swinging at more pitches out of the strike zone and making contact with fewer of them, which is a mighty disturbing combination.

Even worse is that he’s hitting grounders 53 percent of the time, 10 percent over his career total. He’s getting the ball in the air 29 percent of the time, compared to a career average of 39 percent. I’m no scout, but I’d feel a lot more comfortable with Fielder hitting fly balls than trying to beat out infield hits.

Random month like this that no one paid attention to because it wasn’t April:
You know, he’s never really had a month of misery in an otherwise great season. Last June, he was similarly screwed up, hitting .228/.310/.347 before finishing the season strong, but the overall season was still below his usual standards.

65. Probably hosed. There’s no reason to use Howard as a comp other than the dingers, but out of the 50 different outcomes I can come up with for the next five years of Fielder’s career, there aren’t a lot of them with a happy ending. I think I predicted 50 home runs for him before the season. This is a reminder to skim my articles for the GIFs and then move on with your life.

Prognosis:
The scariest part is his 7-to-27 strikeout-to-walk ratio, which is completely unlike anything he’s done over a full season. But, as you’ll read in my interactive, 6,000-word longform, we’re dealing with small sample sizes in April. No, it’s true. And when you look at the batted ball data (which already have a decent, if imperfect, sample for the season), everything’s basically the same. He’s making the same contact, he’s swinging at the same pitches out of the zone (fewer, even), and you can’t even blame the BABIP (.333). 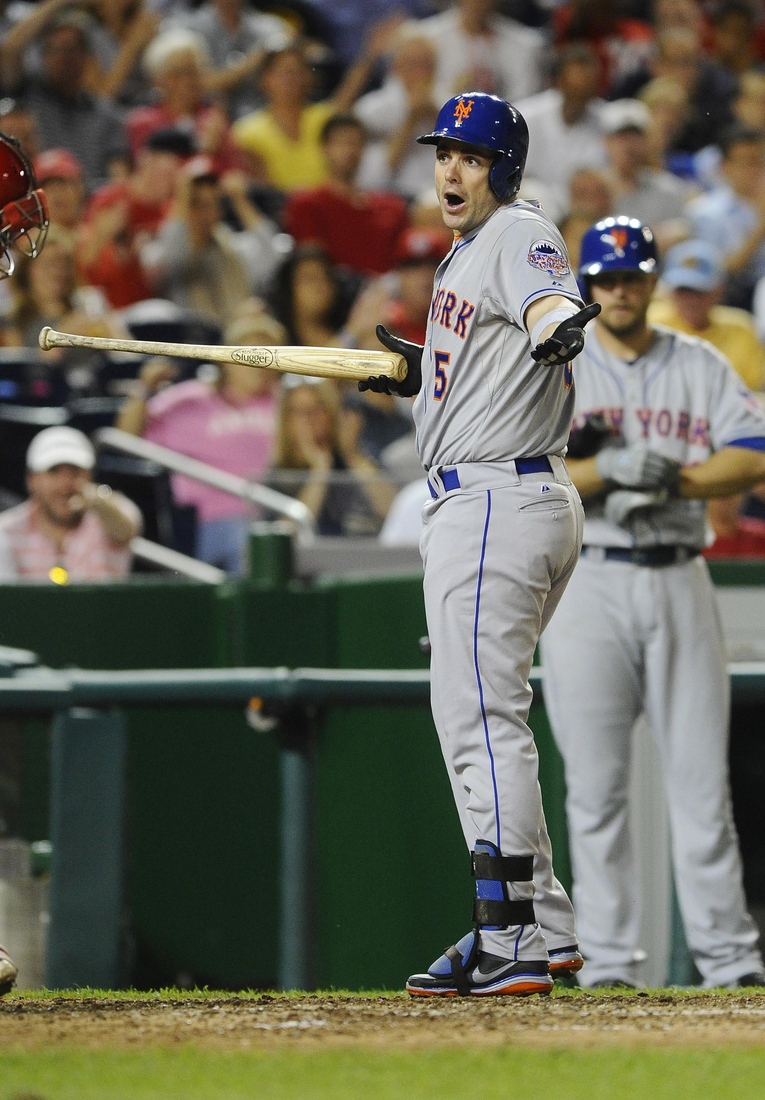 Everything looks the same. The results aren’t the same. Maybe the back is acting up? Back problems are like James Woods in Casino. They never really go away, even when you think you’re in the clear. Eventually you have to beat them up in front of the oblique muscles. Or something.

Scouting the worry tool (20-to-80 scale)
35. He’s probably still David Wright. He has four extra-base hits on the season, which is what Charlie Blackmon had on April 4, so if you’re worried about the back, you’re not being silly. It’s a concern.

Prognosis:
Get outta here. He’s going to melt the collective face of the AL over the next five months. He’s already hitting .419/.419/.581 over the last week. I’ll blame the freaky amount of weather-related off-days for the Tigers. He couldn’t get his rhythm.

But this is a reminder that eventually it will happen for Cabrera, just like it happened for Mel Ott, Frank Robinson, Hank Aaron, and Mike Schmidt. That will be really, really strange. I’m not looking forward to the sequence of "What’s wrong with Miguel Cabrera?" —> "Is Miguel Cabrera finished?" —> "Why did the Phillies trade for Miguel Cabrera?" articles in 10 years.

Random month like this that no one paid attention to because it wasn’t April:
A bad month for Cabrera is usually one where he still has five homers or a .380 OBP, so this is a mildly amusing category for him. It’s worth noting that last September, though, he hit .278/.395/.333. He has three homers in his last 186 plate appearances.

20. This is the Jose Molina’s speed of worries.