A premature review of the new Braves ballpark

Most importantly, how will dingers look there?

Share All sharing options for: A premature review of the new Braves ballpark

Baseball nerds rejoice! The renderings for the new Braves ballpark are here! We've been waiting a long time for this. To put this in perspective, the last time the Braves released ballpark renderings, the child actress who plays Sansa Stark in Game of Thrones was just a child. It's been too long.

There's a full set of renderings here. A sample:

The Braves release renderings of the new Cobb stadium. Here's a few: pic.twitter.com/Kw5dZwfsxR

Mm-hmmm. Mmm-hmmmm. Now, I have questions about this ballpark. Is there a way to ask qu ...

Right, good, thanks. And what about the amenities around the new park? 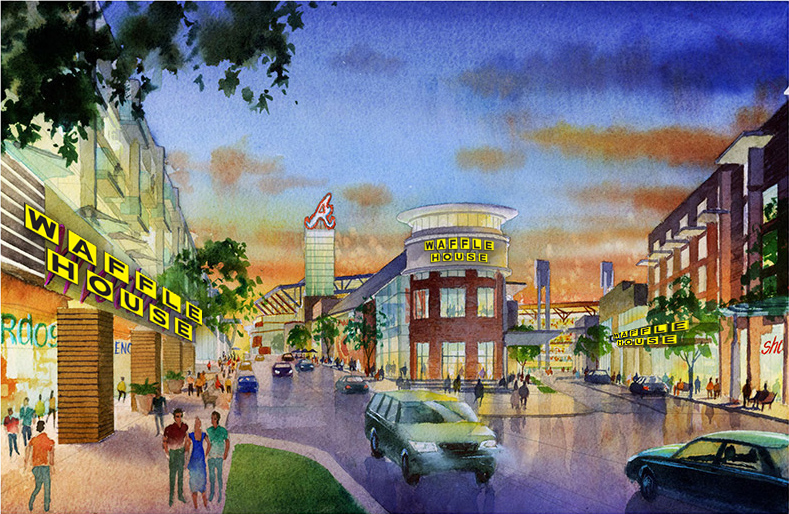 But my job here is not to grade the unwritten rules of boondoggles and plutocracy, but to guess how this park will play for dingers. Over the offseason, I looked at all 30 ballparks and ranked them based on how home runs looked in each one. The best? Fenway. One of the worst? Turner Field. This quote from Hardball Timesdescribed the problem perfectly :

Jeff Francoeur (hit a ball) 463 feet to left center field at Turner Field on April 30. The announcers said nothing about how far it went, I doubt they realized; on the same day Giambi hit a 387 foot homer off the facing of the upper deck in Yankee stadium that had the TV crew there in an uproar.

You couldn't tell how far a dinger went in Turner Field, even if it was annihilated. This was a problem. Let's guess if Coke Field or Delta Park or Wolf Blitzer Park at CNN Field will be an improvement, based on the limited information we have.

#Braves reveal renderings of new ballpark. Here's one of them. See them all at http://t.co/d0nb0r7f0B pic.twitter.com/REN1rF4W7x

Instant demerit: looks like a bullpen just down the line.

Instant demerit: looks like the second deck is going to be hard to reach, just like the current park.

Those look like shiny glass things above the second deck -- luxury boxes or a restaurant or some such. If Evan Gattis can hit one of those with a dinger, this will be fantastic dinger park for right-handed hitters. It doesn't look like that's possible, though. We'll probably have to settle for upper-deck homers down the line. This isn't an improvement over Turner Field. Wasted opportunity.

Here is your first glimpse at the new Braves ballpark opening in April 2017! #HomeOfTheBraves http://t.co/RAun0OuOAK pic.twitter.com/RmW7ELxaWq

Impossible to tell. It looks like some foliage for the batter's eye, which is okay. Is it possible to hit the concourse on a bounce and send the ball out of the ballpark? Worth watching. Otherwise, fairly bland. It's hard to make center field pop because of the necessity of a batter's eye. The only way to do it is a super-high wall, like Chase Field or Fenway Park, and I get that's not going to appeal to every team.

Here's another initial rendering of our new ballpark. (And yes, that's the Chop House in RF) #HomeOfTheBraves pic.twitter.com/WWrDbPGfpV

Ding ding ding. Here's the great hope for dingers at the new park. The water in the second one looks awesome, but there's almost no way it's going to catch a home run on the fly. That has to be 510 feet away, easy. But, there's a chance. And if it happens, it will be a Reggie-in-Tiger-Stadium moment -- something to remember for decades. If it's not impossible to do, it's worth waiting for, even in batting practice.

In a practical sense, too, the right field is a huge improvement. Look at all that crap for baseballs to clang off. There's glass down the line, hopefully safety glass that's also really, really sensitive. There's an upper deck, and the baseballs can leave the park entirely. No, the water probably isn't realistic, but I'll settle for a ball that lifts off into the night and doesn't land in a seating area. There's a boring ol' bullpen, which is an instant demerit, but that's balanced out by the possibility of the concession stand just down the line. Nothing makes a home run better than a guy with a full tray of $9 nachos diving into a pile for the ball.

So color me cautiously optimistic. The new park probably isn't going to be good enough for dingers to crack the top 15, but it'll be better than Turner Field. Maybe in 15 years, the next one will be even better. All I know is that for the new park, people will come, Ray. 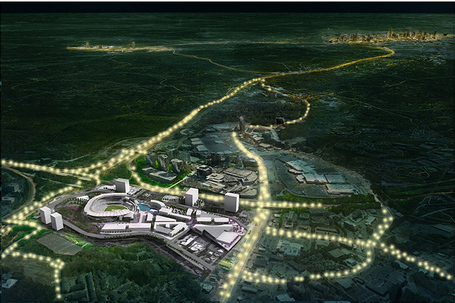 People will come. And then they'll get in their cars for reasons they can't even fathom. Then they'll stay in their cars for a while, heads resting against their hands, with their arms propped up on the open window, Ray, as they sigh loudly and creep forward several feet before stopping again.

People will most definitely come.