The Cuban slugger is in a fascinating spot, and if he's not suspended for several years, he might be a major leaguer sooner than expected.

Share All sharing options for: Alfredo Despaigne close to majors, close to never playing in majors

Alfredo Despaigne is so close. He’s in an adjacent country, only a 47-hour car ride away according to Google.

Alfredo Despaigne is so far away. He might not ever make it to Major League Baseball.

Help us, commissioner of the Mexican League. You’re our only hope.

First, there’s a chance you need to be caught up on the Legend and General Mystery of Alfredo Despaigne. He’s shaped like a tipped-over refrigerator, and he’s something of a black belt in the dinger arts, breaking Yoenis Cespedes’ single-season record in Cuba in 2012. Despaigne is also responsible for one of my absolute favorite GIFs in the history of computers:

He’s been in the Mexican League since the end of last year. Here’s what he’s done there:

There was a Kickstarter that never got off the ground because of a) your general stinginess and b) local and international laws. 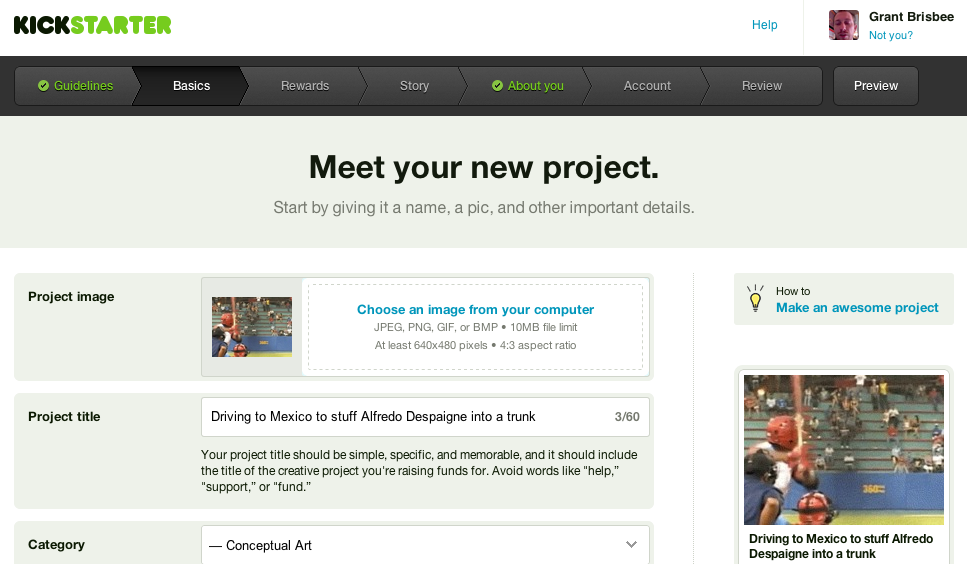 Yasiel Puig is already showing better plate discipline, can you believe that? He’s actually swinging at the pitches he’s supposed to, which is just awful. The next thing you know, he'll start flipping his bat for walkoffs only, then he'll drop the bat flips entirely, and finally you'll wake up one morning, and he'll look like Eric Sogard. This league needs something fresh. It needs Despaigne. You need Despaigne.

Ben Badler has an update at Baseball Ameríca!

But if Despaigne has any aspirations to play in MLB, all of the pieces would seem to be falling into place for him to make that jump …

The (Mexican League) could determine the length of the suspension to be up to seven years, and given that Despaigne turns 28 next month, a suspension of that length could destroy any chance of him ever playing in MLB if he decided to defect.

The issue is an apparently fraudulent passport Despaigne has from the Dominican Republic. From an earlier article:

The whole thing seems like 500 tax forms taped to a 1,600-page Apple terms and conditions document, and I'm not about to pretend I can parse it. But someone in the Mexican League will, and the options will be to a) suspend Despaigne, b) make Despaigne eligible or c) do nothing. The first one makes him ineligible for Major League Baseball, as it'll abide by the ruling of the affiliated Mexican League, according to Badler. The second one makes him a free agent, essentially, and if he wanted to play in the United States, he could apply for residency in Mexico and become a Cuban defector.

There’s no indication that he wants to play in the United States, other than the assumption that he likes money (he would not be subject to the international bonus pool because he’s over the age of 23). I can also offer him my life savings of one (1) Starbucks gift card if he decides to come to the States, though I'm not liable for the pain and suffering after he finds out that Starbucks coffee taste like burnt toenail broth.

A premature review of the new Braves ballpark

The Fraternal Order of Despaigne Fetishists is in limbo, then. He's never been closer to the majors, yet he's never been closer to leaving us for good. The numbers in the Mexican League are deceptive -- the .928 OPS ranked just 30th in the Mexican League last year, behind Eliezer Alfonzo and a 35-year-old Ruben Mateo -- plus, the strikeout-to-walk ratio hints that he might not command the strike zone well against better competition. The Jose Abreu-like impact we're expecting might not happen.

There would be a bidding war, though, so some teams think he has a good shot to make an immediate difference. It could be an offseason where the best hitters available are Chase Headley and Pablo Sandoval, and I'm not sure if they're adding up to a 1.000 OPS right now. That would make Despaigne a fascinating option.

He's already a fascinating option. Hopefully, he's as befuddled about the bureaucracy as all of us, caught in something he never intended, and he's not suspended. Apparently, the option that's most appealing to those of us hoping to see him in the majors is for him to be ruled ineligible. So root for that, I guess?

We've never been closer to Despaigne playing in the majors; we've never been further away. He's like six Jose Altuves wrapped around a core of Jose Altuve, and we've been patient enough. Cross your fingers. I, for one, will welcome this new Cuban Rob Deer overlord.