And that's probably fine. But, boy, your dad is ticked.

We’re here today to discuss unwritten rules, but this is a fringe addition to the genre. What Troy Tulowitzki did, the unwritten rules he broke on Friday night, aren’t likely to get him thrown at. He did not offend the other team or their sensibilities. In fact, they would have thanked him personally if they could have.

But your dad is so danged mad.

That’s Tulo’s transgression: He stopped after hitting a two-run single. Rather than get in a rundown, he stopped in his tracks and let the other team tag him. Your dad can’t believe it. Your dad just texted you in anger. The text reads "jam sentry fudge ball" because his autocorrect’s broken or something, and you should probably take a look the next time you’re over, but the meaning of the text is clear: Troy Tulowitzki is the enemy of hustle. He is, for now, the worst baseball player in the world at hustling.

You know what I can’t do? Hit a baseball. I can’t field a one-hopper hit at 100 miles per hour, and I can’t turn a routine double play. But I can hustle. I can run around like Rudy out there if you’ll just give me the chance. And the major-league minimum. Give me both of those things, and you’ll see a new definition of a fella trying his best. I’d be beyond terrible, but I’d at least get one thing right. I would hustle.

Everyone can hustle. Everyone has an 80 ceiling for hustle. Everyone can be the Mike Trout of hustle. Even your dad, who just texted you again to complain about Tulowitzki. Somehow, it seems unfair for someone to have all of the other tools that we’re so envious of, yet skimp on the hustle. That's why people get so worked up about this stuff. Look at him just standing there. Then he grabs his ding-dong! Another person running right at him, and he stops to grab his ding-dong. He doesn’t respect the game. He doesn’t get it.

Think that’s an overreaction? Here’s a comment thread on the Internet with people arguing about this. So we might as well argue about it. Let’s get some simple truths out of the way:

1. When a pitcher doesn’t hustle on the bases, it’s cute

2. The Rockies were up by five at Coors Field

Park-adjusted, that’s like a three-run lead. It was the end of the second inning, far too early to play the screw-it game.

3. Teams botch rundowns all the time

(Aubrey) Huff was on second base when Buster Posey hit a one-hopper to the mound. Jorge De La Rosa ran at Huff before throwing to Troy Tulowitzki, who ran Huff toward third. By the time Tulowitzki, realizing he couldn't catch Huff, made a high throw to Jonathan Herrera, Herrera couldn't get the tag down in time. The gift runner turned into a gift run moments later when Pat Burrell hit a sacrifice fly. Said Tulowitzki, when asked about the play: "There wasn't really any miscues. From the replay I looked at, I thought he was out."

4. Troy Tulowitzki is made out of sand and children’s wishes

Let Grant Brisbee guide you through the silly world of people being offended about baseball things.

Tulowitzki has been on the 15-day DL five times. He’s missed 267 games because of injuries in his career, and he’s had problems with his thigh, wrist, groin, thumb, back, foot, hip, shoulder, oblique, and he’s fractured a rib. When tallying up the risk and reward of the rundown, you have to factor in Tulowitzki getting hurt and ruining the Rockies’ season.

After Tulowitzki’s RBI single, the Rockies’ win expectancy was 89.5 percent. Tom Tango said there was about a 23 percent chance of Tulowitzki scoring. The odds of him scoring combined with the odds the Rockies would need that run were low. The odds of him getting hurt in the rundown were also low, but also much, much more costly to the Rockies’ goal to win more baseball games than other teams.

So where’s the balance? How important and/or fragile does a player need to be if he’s going to intentionally blow off a rundown? I’m not sure if there’s an exact answer, but I also know where Troy Tulowitzki is. This is a quick and dirty guess as to where a couple of players fall on the hustle matrix: 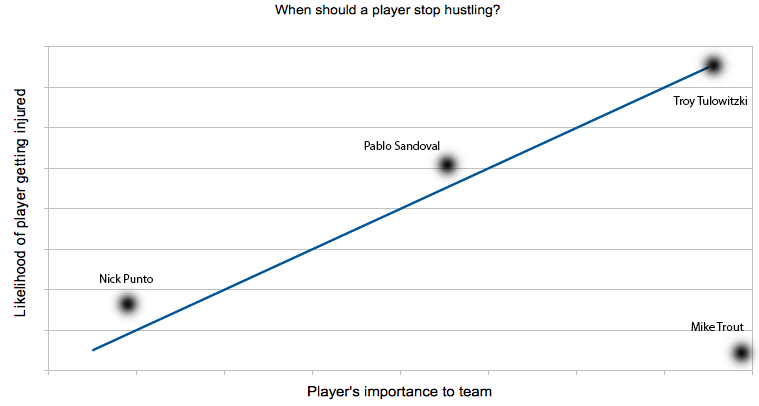 And here’s a quick and dirty guess where players should have the right to take it easy on a play like that with a five-run lead. 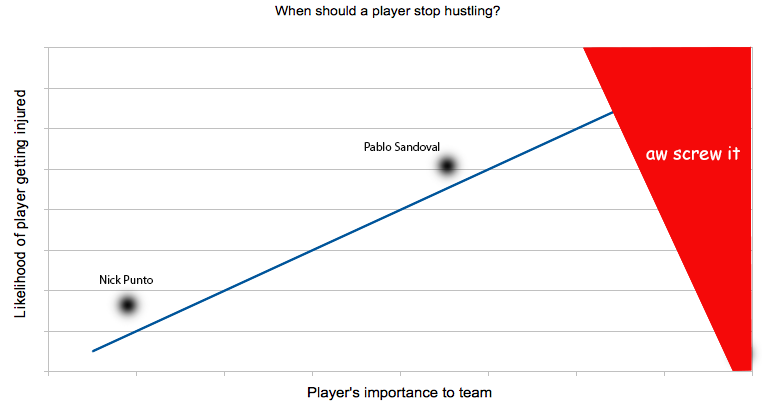 You might explain this to your dad, and he probably doesn't care. "If you're too hurt or fragile to play the game the right way, you shouldn't play the game," might be the next words out of his mouth.

This weekend, though, there was a perfect example of a player's hustle perhaps costing his team more than one game. Yasiel Puig made an amazing attempt at a fly ball on Sunday with the game on the line. He couldn't get it, and he injured himself in the process. He's listed at day-to-day, and this really isn't the best comparison because the game was absolutely on the line with that attempt. However, I have no doubt that Puig would have done that in a five-run game, too, because he's Yasiel Puig and he doesn't think physics is such a big shot. One of these years, he's going to do something like that, and he's going to miss time. I'd also put Puig in the red zone up there because of his importance to the Dodgers. Puig doesn't give a damn about that red zone.

Given the choice of a star who knows his limitations and the basic idea behind risk/reward and a star who knows one speed only, I'll take the former. I have no problem with Tulowitzki ending the inning rather than running around like a fool, exposing himself to tweaks and pulls to chase after an unlikely outcome that's unlikely to matter. He gets a 2 for avoiding a rundown and a 5 for absentmindedly grabbing his ding-dong on live TV.