What if top prospects from the past took the Gregory Polanco deal?

You were not expecting to read Brian Hunter's name today. Come, let's hop on the nostalgia train.

Share All sharing options for: What if top prospects from the past took the Gregory Polanco deal?

For a baseball player, though, it kinda makes sense. All Polanco needs to do is be good for six years. He’s been good at baseball his whole life; what’s six more years? The difference between tens of millions and hundreds of millions of dollars is the difference between your grandchildren being set up for life and your grandnephews and grandnieces being set up for life, between retiring wealthy and retiring wealthy enough to start your own baseball academy.

The details of the reported contract offer, from Jeff Passan at Yahoo!:

The Pirates recently offered the 22-year-old Polanco a seven-year deal with three club options that would guarantee him a little bit less than $25 million, a source with knowledge of the team's plans told Yahoo Sports.

Another report says there were three team options that could have made the total value of the deal closer to $50 million. Polanco entered the season as the #10 prospect in baseball, according to Baseball America. How many position players in the top 10 would have been wise to take the guaranteed money, and which ones would have been worse off?

Here are all of the position players ranked in the top 10 of Baseball America’s top-100 prospects. There are two columns. The left column is the bunch that would have been smart to decline the contract because they eventually got paid more than $25 million in 2014 money. The right column is the bunch that would really, really want an extra $25 million right about now. You probably would have figured that out about six names in.

Note: I removed NPB players like Ichiro and Hideki Matsui because they were paid/treated more like free agents than prospects.

There are names up there that make you do a double-take, like Royce Clayton, who was an excellent defensive shortstop and certainly worth a contract like Polanco’s (which would have been about $15 million in 1993 bucks). But he never made close to that in arbitration before becoming a free agent, so he’s on the second list.

There were other tough calls. Jeffrey Hammonds got out after six years and signed a three year, $21.75 million deal — worth about $29 million in today’s money. Hank Blalock’s career earnings were worth almost exactly $25 million after, so he’s basically a tie.

There were players who eventually combined the sheen of being a former top prospect with some early success, and turned that into a contract their team would later regret, like Rickie Weeks, Alex Rios, and Vernon Wells.

I had absolutely no idea what to do with Josh Hamilton. 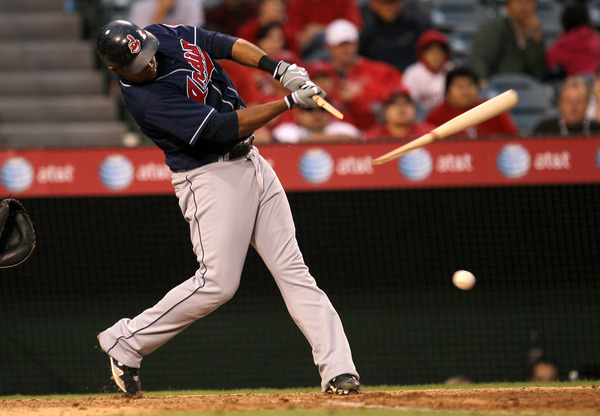 Hitting .309 in Triple-A this year, thanks for asking. (Getty Images)

The list on the right is, perhaps, longer than you might have expected. There are a couple of players who had lousy injury/health luck (Nick Johnson, Rocco Baldelli), but there are a lot who just couldn' t hit a lick once they got to the majors. You were not expeciting a Ben Davis reference when you woke up, but I live to give.

Note that the question isn't about if the teams should sign top-10 prospects to deals that buy out a year or two of free agency; even if they hit on one out of every three of these contracts, they make out like bandits. For example, if the Rangers sign both Mark Teixiera and Ruben Mateo to long, team-friendly deals with options for Polanco-like money, the Rangers still would have done extremely well for themselves. And they also wouldn't have won the pennant twice because they wouldn't have had Matt Harrison, Neftali Feliz, and Elvis Andrus.

MLB vs. the fans

Those horrible, horrible fans, talking about the team and building interest in Major League Baseball's product. When will they learn?

MLB vs. the fans

This is all so confusing.

One last thing, though. There are tools monsters on the right side, players who elicited patience from their teams because they were going to break out any second. Players like Drew Henson, Ruben Rivera, and Corey Patterson were prospects more because of what they were supposed to do than what they did. If there's a lesson here, it's that tools monsters with contact issues should absolutely take the money and giggle. The risk is that they turn into Hanley Ramirez and put it all together in the majors and lose out on scores of millions. The reward is that they have guaranteed millions.

Polanco doesn't have that. And his choice has to be so danged hard. All he has to do is be Carlos Pena or Rickie Weeks, for six years, and he'll advance to the money round. Except this is his life, not a game show. He shouldn't have to watch out for whammies. He shouldn't have to risk it all for the final question or trade his winnings for what's in the box.

That's what he's doing, though. More power to him. He's more polished than a lot of the names up there were, which is an important consideration. The odds are good that he'll make it to his payday and come out extraordinarily rich on the other side.

But that list on the right makes risk-averse people like me twitch. No pick-up basketball games or skeet surfin', Gregory. Stay healthy and do your thing, and you'll be fine.