The search for the best name in minor league baseball

Rougned Odor is now in the bigs. Someone is going to have to wear the crown he left behind.

Share All sharing options for: The search for the best name in minor league baseball

This day was coming for some time. Texas Rangers second base prodigy Rougned Odor was simply too strong a prospect to remain in the minor leagues for too long, and a combination of his performance, injuries in Arlington, and what we can only presume was an organizational wish to see the word "ODOR" on the back of a big league jersey hastened the day. Rougned Odor is a major leaguer, now. This is nothing to mourn, of course. But it does change some things.

For as long as Rougned Odor was in the minors, he would wear the crown of Best Name In The Minors. No, he has never won the annual Minor League Baseball poll on this question, but King Harald Bluetooth of Denmark didn't win any elections, either. Some things you are born with. Rougned Odor was born with the name Rougned Odor, which is enough. Lone Star Ball's Tepid Participation wrote a useful explainer on Odor last year at The Classical, which will tell you how to say his name, and about the player himself.

But such information is mostly beside the point on this question. We are looking for the new best name in the minors. We might as well get to looking.

Pretenders to the Throne

I posed the question of who will wear the Crown of Odor on Twitter, and was surprised to find something like general agreement on one candidate: 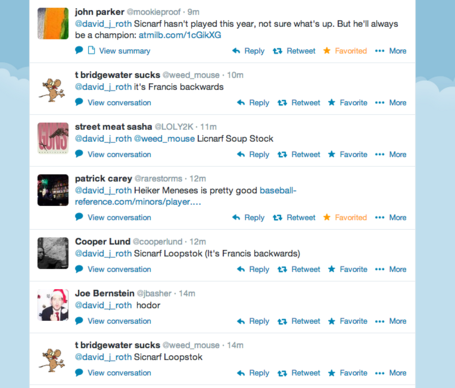 There is, in fact, a bit of consensus around Sicnarf Loopstok, who won last year's MiLB Moniker Madness poll, their annual attempt to find the best name in the minors. To be sure, Sicnarf Loopstok is an extremely excellent name, but there are reasons to question this poll's assessment. Odor was 13th, for one thing. The amazing Forrest Allday was 34th. Janelfry Zorrilla was 45th. Kenneth Peoples-Walls was 55th. Both Rainy Lara and Nerfy Nunez -- NERFY NUNEZ -- did not even make the list. The big-ticket international prospects Yeyson Yrizarri and Yeltsin Gudino were not yet playing professionally. Anyway, democracy is not always pretty, and it is not always correct.

This is not to take anything away from Sicnarf Loopstok, who deserves every bit of this acclaim. But also Sicnarf OPS'ed 493 in the short-season New York-Penn League in 2013, which means that it seems sensible to figure out some backup options. We cannot rely on Sicnarf to be there for us forever.

You've noticed, probably, that Sicnarf Loopstok's first name is "Francis" backwards. This is a good thing -- although his last name is Loopstok no matter what; it's a very strong name. Still, it could be said to give Loopstok something of an unfair advantage. Even players with otherwise unremarkable baseball player names would see their standing improved significantly if allowed to flip their first names around. Jameson Taillon is a promising prospect with a solid baseball player name; Nosemaj Taillon is a contender. Bubba Starling becomes Abbus Starling, his name suddenly a sort of dark prophecy on his future prospects.

Yeltsin Gudino deserves special mention, here, because his transposed name of Nistley Gudino is still pretty good. Jose Jose, another strong candidate, is perhaps even stronger as the fully palindromic Esoj Jose. But perhaps we are not looking in the right place.

For all the elegance of Jose Jose and the additional elegance of Esoj Jose, it can't be said that spoonerizing his name -- flipping the initial letters of his first and last names -- does anything for it. It turns Rougned Odor's name into alphabet soup and mostly saps the magic from Janelfry Zorrilla.

It's worth noting, again, that Licnarf Soopstok is still an extremely good name. (2010 MiLB Moniker Madness champion Rowdy Hardy becomes Howdy Rardy, which is really good, but Hardy hasn't played affiliated ball since 2011.) Other candidates, such as Rock Shoulders -- who becomes Shock Roulders -- see similar near-improvement or at least parallel excellence. Mookie Betts becomes Bookie Metts, and so becomes a contender himself. Cedric Hunter becomes... anyway, there are a lot of good ones.

These are unsettled times, which is natural for any interregnum after the passing on of a beloved and powerful king. Sicnarf Loopstok certainly has all the tools one could want in this category -- a strong spoonerism, a logical transposition, the last name LOOPSTOK and the first name SICNARF. He should be honored and respected, to be sure. But he may not be long for his role.

There are rumblings from the south of one who will unite all of Minor League baseball, a name that could restore the glory of Rougned Odor's time on the throne. This could be our redeemer. He will be familiar.

Rougned Odor's brother is himself a serious prospect, although he is still too young to sign with a Major League team. He will be eligible on July 2. His brother's name is also Rougned Odor.