Once again, Major League Baseball sallies forth to capture more of the female audience, and once again it falls on its face.

Nothing like a public forum for a confession, but here we go: I have a thing for designer handbags. To be honest, it's not just handbags, it's really anything that signifies couture, goods that feel luxurious and spoiling. I'm also regimented when it comes to the upkeep of femininity:  Haircuts every four weeks, manicures and pedicures every two weeks, eyebrow threading every three weeks, and I'm on a first-name basis with the saleswoman at the Dior counter because they have the best lipstick.

I do these things not just for outward appearances, but because they make me feel good. Were I one of those effortless beauties, the type who can leave the house looking good having not showered, eliciting jealous stares even in yoga pants, life would be easier, but I'm not one of those women. I have curves which in some places look more like tubes of biscuit dough stuffed under my shirt than the flattering ones that make stars of actresses like Christina Hendricks from Mad Men. I'm an Italian-Hungarian mix, which sounds exotic on paper, but my personal genetic inheritance left me with the worst parts of that -- an uneven skin tone and the unenviable ability to grow hair in places that, left unchecked, might make me perfect for a sideshow. Yet, after years of believing that women who weren't conventional beauties shouldn't bother at all, I found that it is essential that every morning I put on something that makes me feel beautiful and fierce before marching my distinctly round ass down the street in heels (even though I'm very tall without them), standing proudly next to the prettier girls instead of hiding in oversized sweatshirts, hoping no one sees me.

Oh, and one other thing that has nothing to do with the rest: I like sports. I like baseball.

I often get questions about the intersection of my passion for sports and my ability to spot a knock-off Louis Vuitton bag, but such interrogatives are inherently flawed. I scoff at the insinuation that we - men and women alike -- can't have diverse interests. I like the things I like -- baseball, fine leather goods, tropical vacations, spaniels, bourbon, books, boat shoes -- because they bring me happiness. There isn't necessarily any overlap or connection between them except me. I brought them into my orbit; they didn't come as a package of interlocking parts, and can all be enjoyed discretely without contradiction.

The best things in life don't have to fit into the overlapping part of a Venn diagram. You wouldn't want to mix hobbies like drinking wine and skydiving or sewing and bull riding. Things get messy. People could get hurt. 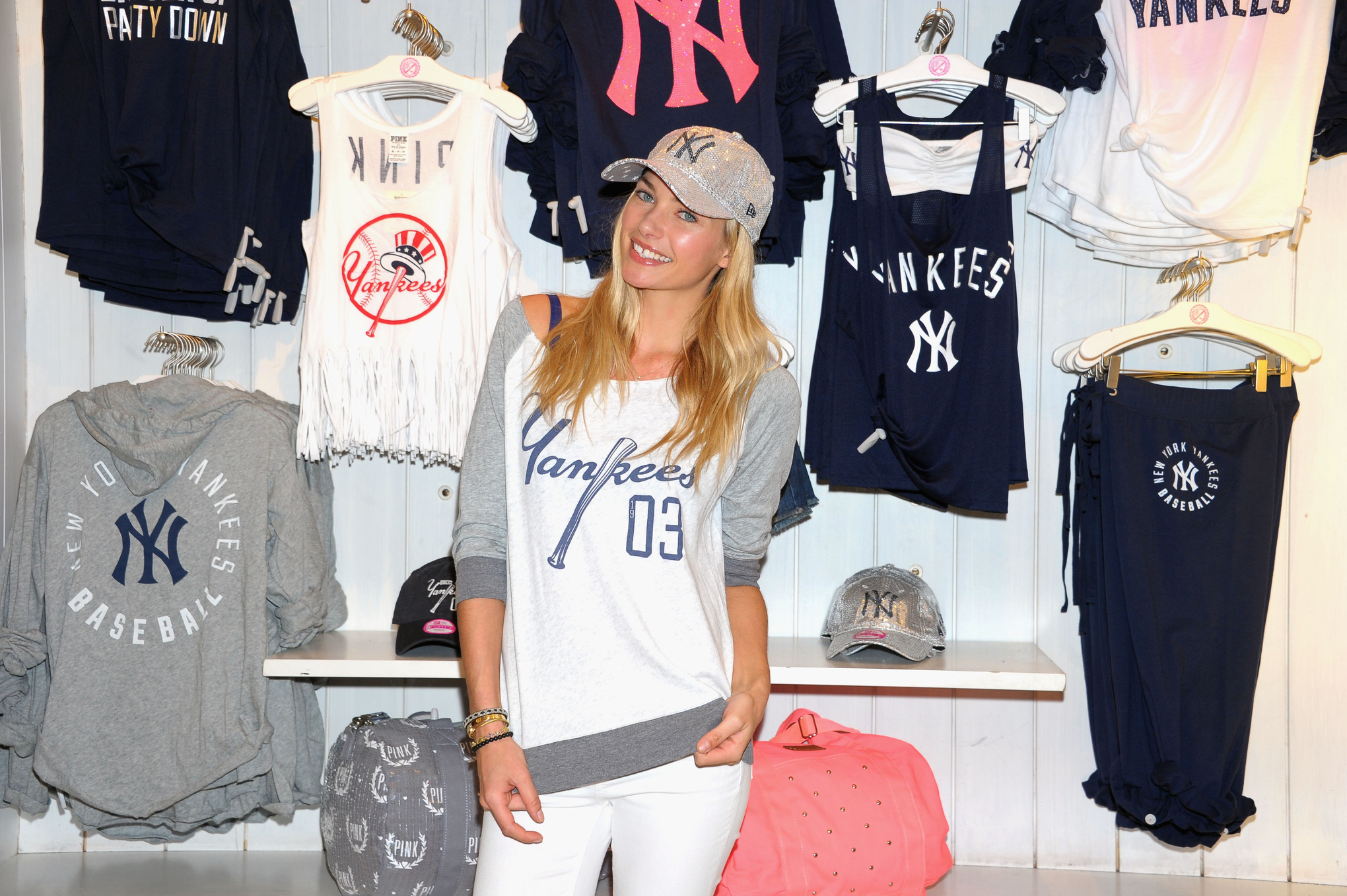 Each of life's pleasures can be a stand-alone component of personal bliss. That's why the "Fields of Fashion" event that Major League Baseball is hosting at parks around the majors this season is the latest in a string of gender-focused fails that are reductive and tone deaf. If you haven't heard of the event yet, here's the press release from MLB:

Major League Baseball is launching a series of unique stadium lifestyle events called "Fields of Fashion." Geared towards female fans, the events will take place in nine Major League ballparks on game days and will be customized by each Club. There will also be two events at special locations - one in Minneapolis during MLB All-Star Week and one at the MLB Fan Cave in New York City.

The events can feature a range of activities including fashion shows, player visits, live music, giveaways, Fields of Fashion gift bags, manicures by OPI and more. The effort is a partnership between Major League Baseball and a group of its licensees including Nike, 5th and Ocean, Alex and Ani, '47 Brand, Dooney & Bourke, Majestic, OPI Nail polish, and more, to create a special event for women out for a night out at the ballpark.

In the release, Baseball quotes a number that is thrown around quite often: approximately 47 percent of its fanbase are women. Acknowledging that women comprise nearly half the audience, that almost half purchasing power when it comes to tickets, concessions, and merchandise, resides with them, is a step in the right direction and/or a belated acknowledgement of reality. Nevertheless, the problem with "Fields of Fashions" and other events hosted at parks specifically geared towards women is that the delivery and presentation is so on-the-nose in its determination to appeal to generic notions of femininity. The marketers are so determined to find that unnecessary overlap between baseball and everything else that women are interested in -- and you can see by the above what they think those things are -- that the offerings become a caricature of themselves.

'Ladies Night' with the Houston Astros

Lana Berry was told there were ladies who wanted to learn about baseball. Instead, she found flavored vodka samples, cleat chasers and DJ Rob G.

'Ladies Night' with the Houston Astros

To give Baseball and its partners the benefit of the doubt, this particular promotion doesn't evince blatant or malicious sexism, however easily some will make that leap. Like all businesses, Baseball wants to expand its clientele. That means Baseball wants women, and especially their money, but because their approach is imperfect the result is patronizing and alienating. There will never be a one-size-fits-all approach to marketing that can capture everyone's interests. These types of events will resonate with some women, and there's nothing wrong with that, but it's disappointing that no one has successfully stifled the propensity to think that the main way to entice new female customers into the ballpark is to create a Beadazzled world for everyone with a vagina who might look baseball's way.

Women are as diverse as men, as catholic in their activities. The awkwardness of "Fields of Fashion" and other "Ladies Events" result from trying to cast too a wide net and attract all types. Don't like nail polish? Here, buy a t-shirt. T-shirts aren't your thing? Here, stare at this hunky ballplayer. Don't care for hunky ballplayers? Drink this martini. But the feminization of everything related to these events makes it an uncomfortable experience for those who don't feel compelled to get a manicure during the sixth inning because they are simply there to watch the game. This sort of pandering puts people in neat boxes of gender-based interests and -- in an era in which gender has increasingly been accepted as a range and not a dichotomy -- serves to alienate those who choose not to shove themselves into one. The insult is threefold: it indirectly devalues the women who already get baseball; it underestimates those who have yet to get it but might yet learn; and it attempts to define all women in an antiquatedly narrow way.

Someday it will be about a player

Someday it will be about a player

Men and women alike love merchandise and buy it by the crate; companies would be foolish not to try and capitalize on our shared consumerism. Yet, what is still unsettling is how marketers feel they have to go the extra mile to create these female-centric hybrid events. The White Sox' Ladies Night included back massages, manicures, makeup consultations, and ZUMBA. The Astros hosted an event last year that had a makeover station and girly cocktails. Now there's this shopping extravaganza that's set to hit 12 locations this season. All of these things seem to lack an understanding of something that should be elementary: Why is it so difficult to understand that within the confines of the stadium, a woman can be there for an explicit purpose? Maybe it's personal preference, but I'd prefer to buy my lipstick at Saks, not behind Section 138 next to the funnel cakes.

Some of that obtuseness can be explained away by Baseball's desire to capture as much of your entertainment dollar as they can, which means not just selling seats but dinner, dessert, and passes for the Ferris Wheel as well. That is all basic and sensible: I don't take issue with the booth where you can test your pitch speed on radar, postgame fireworks, or a jungle gym for children to play on, especially if that means they won't be there kicking the back of my seat for all 27 outs.

Yet, I don't think Major League Baseball can be let off the hook so easily. Teams aren't offering "Men's Night" with live bait and tackle, tire rotations, chest-hair waxing, and free prostate exams, and we'll likely never see as long as those doing the selling continue to feel that men will come to the ballpark on their own, without added motivation. Conversely, women are still reducible to tits and glitter and shopping

It's pathetic that time and time again Baseball repeats the same mistake, operating its promotions under the erroneous assumption that the only way to attract women is to offer them the myriad of things we know they like, coat them in bubblegum and gender bias, serve them up in a martini glass and hope they'll buy baseball tickets than they already do. Forty-seven percent is a too big a slice of the audience not to know what to do with it, or to squander its goodwill.