I ate the Rangers' 2-foot Korean beef sandwich and lived

Share All sharing options for: I ate the Rangers' 2-foot Korean beef sandwich and lived

Concessions at the ballpark have moved far beyond the days of simple hot dogs and Cracker Jacks. There are now healthy options all over Major League Baseball stadiums, so you can grab a veggie dog or fish taco in San Diego, a grilled vegetable panini in Anaheim, sushi in Detroit, or even a veggie cheese steak in Philadelphia, the concept of which blows my feeble, meat-eating mind.

That's good for those of you who might not eat meat or are watching your weight, but what about those of us who wanted ballpark food to go in the other direction? For ballpark food to become as bloated and full of excess as everything else in sports? Don't worry: baseball parks are here to satisfy us, too. Or kill us. It depends on which concession you're talking about, and how many feet long it is.

That's why I'm spending my summer traveling to experience and review some of the most absurd, the most gigantic, the most excessive ballpark food that our great, giant-food-loving nation has created. I'm not talking about a foot-long hot dog with extra onions or some nacho cheese poured on it. No, in these modern times, that mission brings me to places like Arlington, Texas, where the Texas Rangers are selling a two-foot-long Korean beef sandwich. 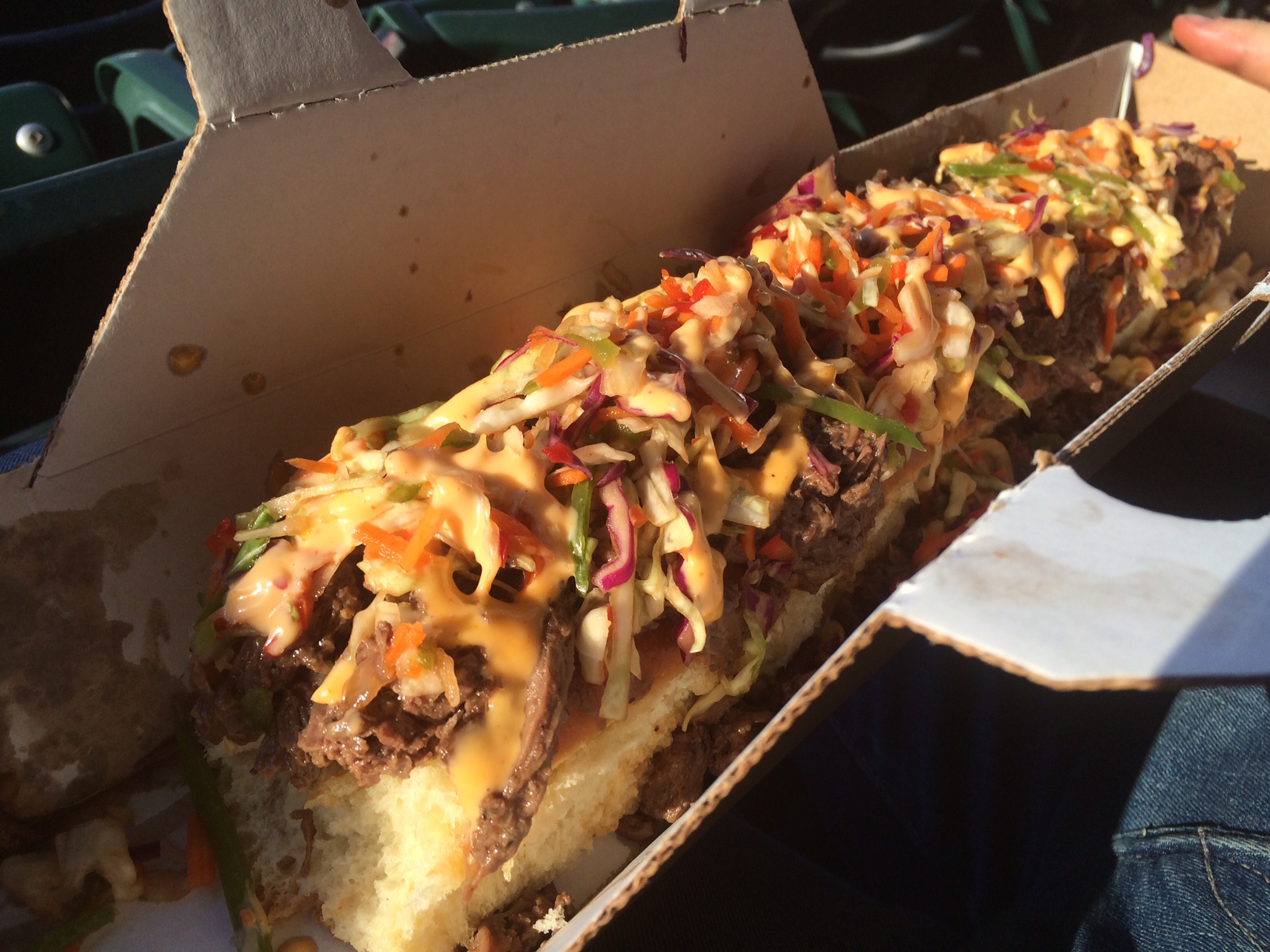 Yes, that's a carrying case. Was it worth grossing out everyone around me at Globe Life Park in Arlington to eat this monstrosity? With the help of the Internet's and Texas' own Lana Berry, I intended to find out.

The Choomongous is part of the Rangers' line of two-foot sandwiches sold at one concession stand in the whole park, Texas Sized 24. The $26 dollar Choowich was introduced this season after Texas signed free agent Shin-Soo Choo to a long-term deal, and, as Choo is Korean, the sandwich has two feet of Korean beef in it.

On top of all that beef lies another two feet of spicy slaw, which they did not skimp on. Nor did they cheat me on the sriracha mayo topper.

The sandwich was finished in about 30 seconds, which is both tremendous in speed and terrifying in nature when you start to wonder how long the pieces have been sitting behind the counter. I can't complain about how long (or not long) it took me to get it, though, as it's not like I was unaware of what I was getting into.

Getting To My Seat

After paying behind home plate, I now had to bring this sandwich and a water... 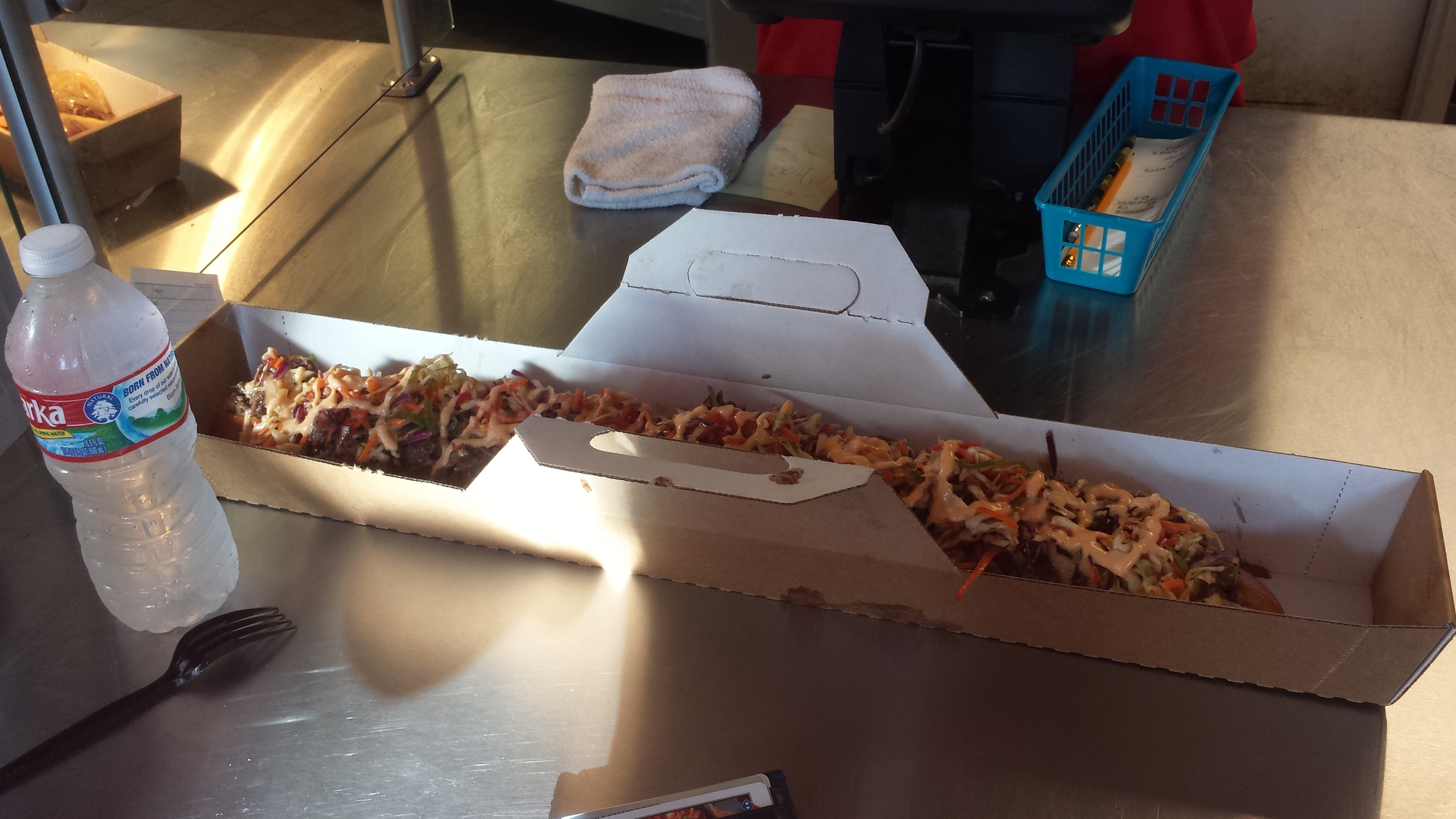 ...to my seat out in right field. Thankfully, the carrying case made life easy. It wasn't so packed at Globe Life that I was in danger of crashing into people repeatedly and losing the sandwich while still on the concourse, though, I did get plenty of looks and shocked exclamations in my direction. If it had been a sold out game, with people rushing around to get to their seats or the bathroom, I might have needed to protect the sandwich and case a bit more.

It's also worth pointing out I grabbed it before first pitch, so the danger of drunken, stumbling fans coming into contact with me and my Choomongous was lessened. The water (and fork) were also secured before I purchased the sandwich, because the lines without the Choomongous were full of more fans for some reason.

I wasn't sure what to expect from the first bite, which I took while they were announcing lineups, a good 10 or more minutes before the first pitch. It had the potential to be delicious, but look at the thing: it could easily be a disaster.

It was pretty good, though! This made me feel a bit better about having to eat the other 23 inches of the Choomongous. I probably should have known better: the beef was incredibly salty, and the sandwich had two feet of mayo on it, whether it was mixed with sriracha or not.

I had just seconds to determine if eating the Choomongous during the National Anthem was going to be a problem or not. I ended up finding the proper balance, by holding the carrying case over my heart with my right hand while eating a large chunk of sandwich with the left. I consider both of those acts to be pro-America.

Think about it. I was in Texas, the undisputed king of enormous ballpark food and bigness in general, to take in two things: an excessively large and unnecessary food item, and a game from America's national pastime. Now, had I been in Toronto and ate during the anthem, that would be one thing. All I was doing here was representing America -- and the state I was visiting -- the only way I could: with calories and baseball.

Also I was afraid any delay would make the sandwich soggier and my stomach angry.

I grabbed a fork in the off chance I would need it, and it became necessary. Well before I switched to a utensil, though, I had my hands. My poor, mayonaise-and-slaw stained hands. 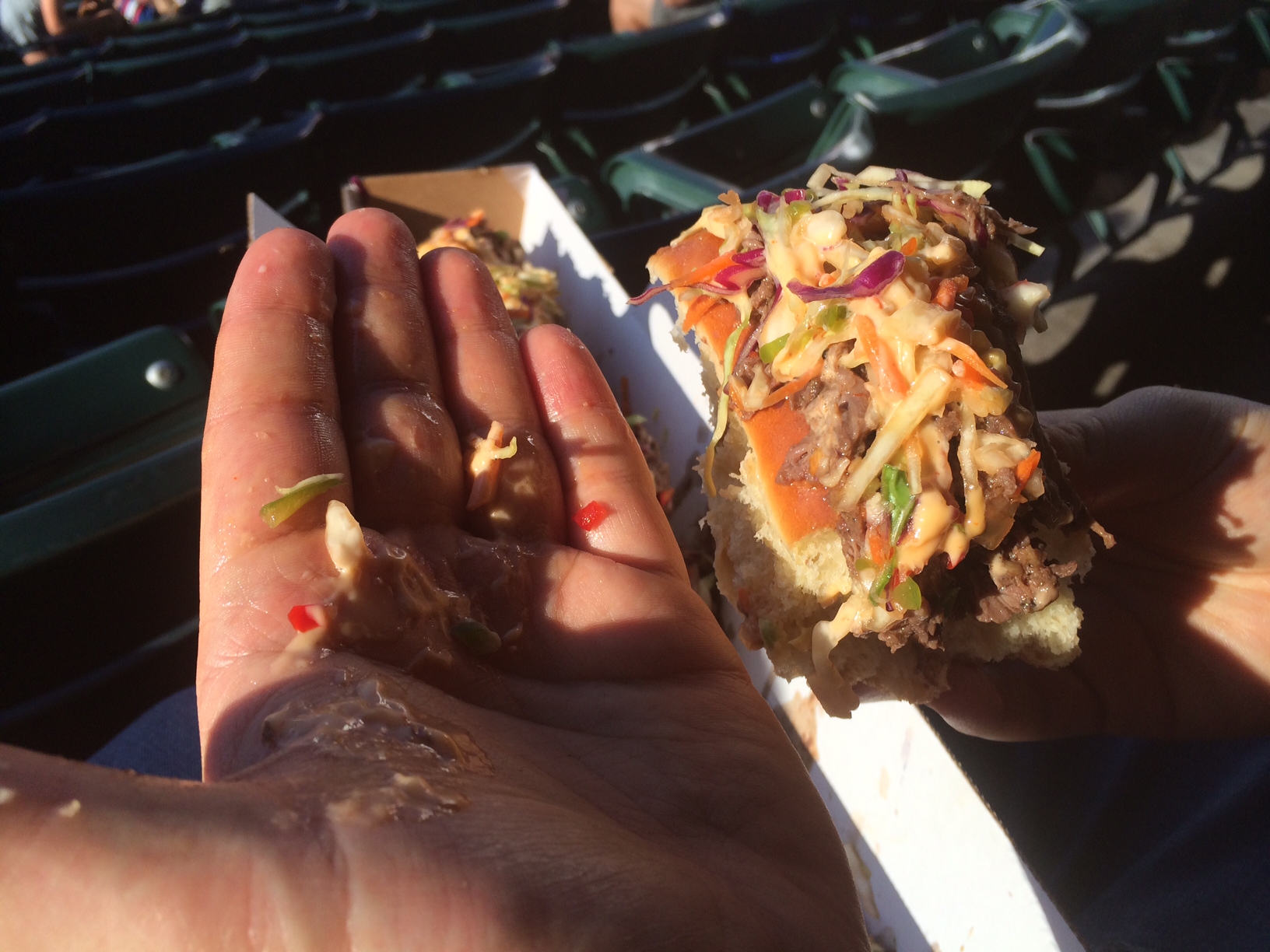 I was making great time on the sandwich, as I had eaten a little over half of it in about 10 minutes, but having to stop to wipe my hands clean either with a napkin or my mouth became a problem, since did I mention I was in Texas in June and the sun was up? Eating a sandwich was a sweaty endeavor because it took place outside, and having to clean up just gave my insides time to realize what I was doing to them. The key to eating large amounts of food is to do it quickly, before your stomach knows you've sold it out to SB Nation.

The Rangers have the most frightening food

The Rangers have the most frightening food

Oh, and I was swatting at flies who desperately wanted to join me in eating the sandwich. As people filed into their seats near me, I couldn't really be accidentally flinging slaw at them from my hand while trying to shoo bugs away. More than the one time it happened, I mean. (Sorry again.)

The only way to grab pieces of the sandwich to eat was from the top, though, as the bread was in no condition to be grabbed from the bottom if I still wanted it to be a bread-like carrying case for Korean beef: there was no way around all that mess on my hand every time I dug in for more.

In that particular photo, you can also see that no one was sitting in front of me. When that changed, I was forced to rearrange the carrying case and sandwich in such a way that I wouldn't bop everyone around me with them in the back of the head. The Choomongous was becoming a lot of salty work.

Right before this photo came the moment where I decided that I didn't want to eat the rest of the Choomongous. Two feet of salty meat with mayo was one thing, but the bread was soggy from the moment I sat down in my seat. Eating it for 20 minutes did not make it less soggy. 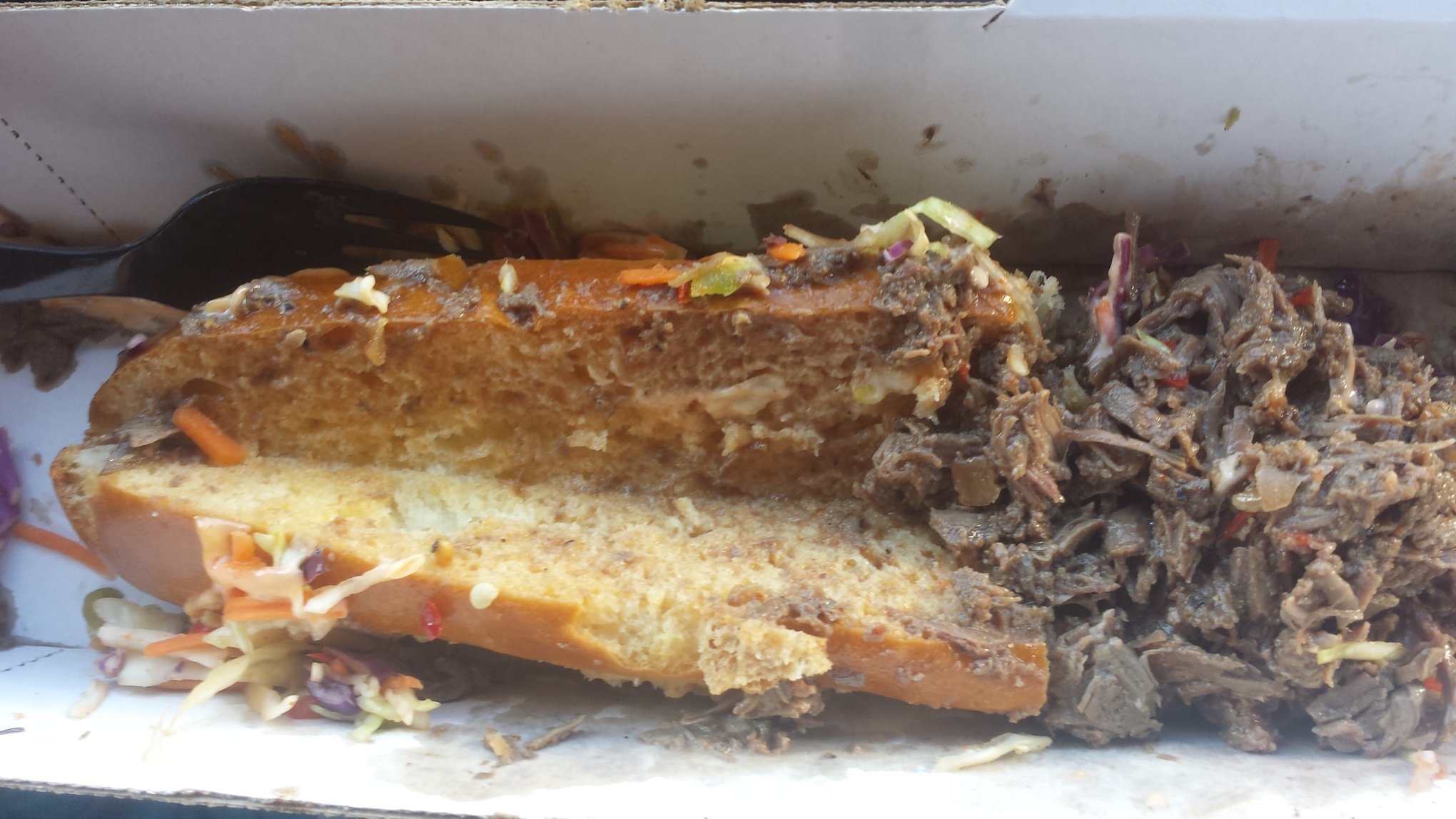 If you don't think it looked gross, turn off your air conditioning for a few hours, eat well over a foot of sandwich, then enlarge that photo. I'll wait.

Plenty of meat and slaw had already fallen out of the bread each time I picked it up and pulled a piece off, so I scraped the rest from that last quarter of the sandwich with the intention of going back to the bread later if I could trick my stomach into thinking it was a sensible idea.

I knew I wouldn't be able to, though, because I was already at the point where all I could taste was salt, and all I wanted after finishing off the Choomongous' innards was to purchase and drink something that didn't have any of that in it.

There was less apprehension before the final bite, but only because self-loathing had replaced it. The first half of the sandwich was good: the second half was me picking at a pile of meated salt for 20 minutes in between sips of water and discussions with Lana about all the ice cream I could have in the later stages of the game if I could just finish off the non-bread portions of the Choomongous.

It should be noted that Lana was also working her way through a ridiculous Texas food item, one that was essentially brisket and cheese poured over waffle fries that were innocently sitting in a bucket prior to that interruption, so this was two-way encouragement to reach a magical land where salted ballpark meats were barred from entry.

I worked my way through, and took that final forkful of Choo: 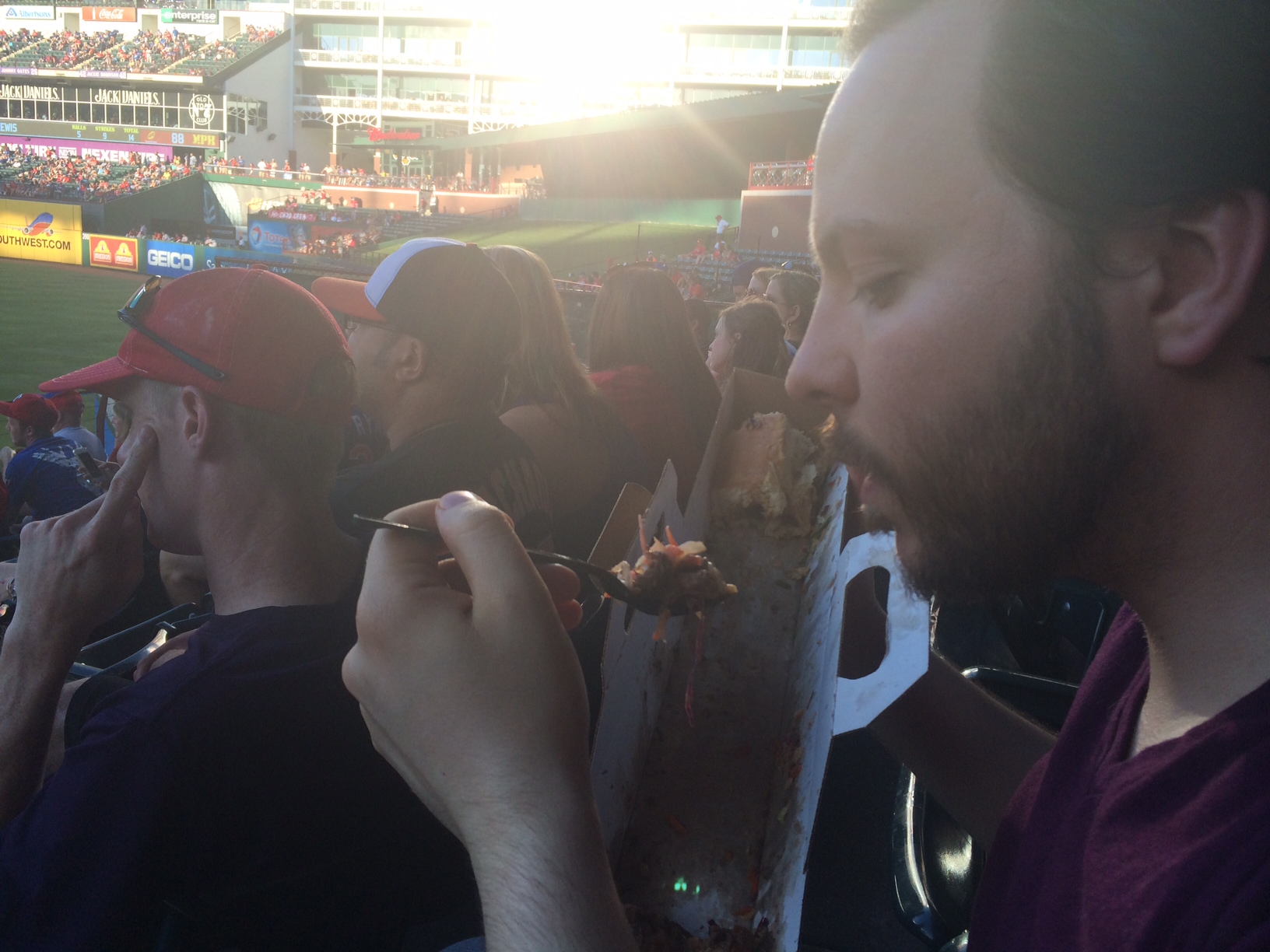 Is it just me or has most of the life and happiness left my face? This last bite occurred around 35 minutes or so after the first one, leaving me with a mostly empty case containing only soggy bread and the fork I was so happy I thought to pick up. 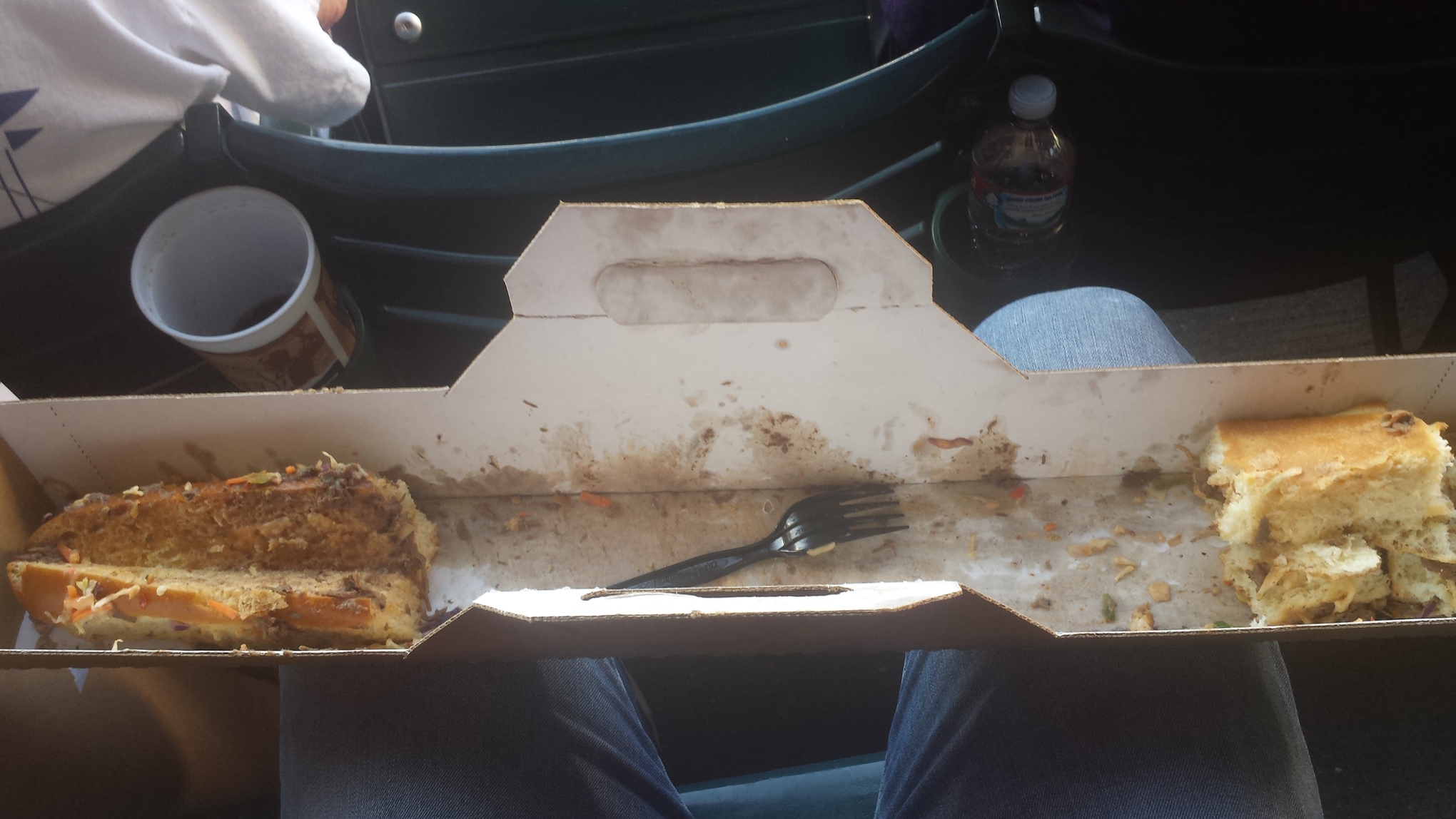 There are two major questions still worth asking: Was it worth it, and would I eat it again? It was a $26 sandwich, which was only slightly less than the face value of the tickets for the bleacher seats I consumed it in. It was also a $26 experience, though, and with two feet of beef, slaw, and okay even the bread which was good for a time, $26 isn't all that much. Especially not when you consider that a single shitty beer at the ballpark can run you $9 before you toss a buck at the vendor to make it an even $10.

All I was doing here was representing America -- and the state I was visiting -- the only way I could: with calories and baseball.

Your tolerance for soggy bread might also be higher than mine: once I got the idea in my head that it looked like the grey bread orcs complained about having to eat in Lord of the Rings, it just wasn't happening for me. It also didn't look any better after sitting in its own mess, post-meat. Whether you can finish or not, know you will need to rehydrate after. However much water you think you need for that, drink more. Double it to be safe.

As for whether I'd order it again, my answer is no, for two reasons. For one, the beauty of this sandwich is mostly in the experience, in being able to point to having eaten it. It's good, sure, but two feet of just good is a lot of unnecessary work, especially when it's really only one foot of good and then another foot to go. Then you have the rest of the food items at Globe Life Park in Arlington: this place is a monument to terrible-yet-tasty, weird (and often large) food. Have the Choomongous once, just so you know what's up and so you can say you did, but next time, shop around a little. You'll find something else nearly as weird just for you.