Sorry, Mark Emmert, there's nothing minor about the minor leagues

Share All sharing options for: Sorry, Mark Emmert, there's nothing minor about the minor leagues

Dr. Mark A. Emmert is a busy man. Too busy to take in a minor league baseball game, apparently.

Dr. Emmert has had a distinguished career. Emmert was chancellor at Louisiana State University from 1999 through 2004. He served as president of the University of Washington from 2004 through 2010. Now he serves as president of the National Collegiate Athletic Association. Last Thursday, he testified in an anti-trust lawsuit being brought against the NCAA. The case, O’Bannon vs. NCAA, involves college players suing for recognition that playing major college sports is a job. The players believe that they should share in the billions of dollars of revenue collected by colleges and universities through sports programs. The NCAA, of course, is working to maintain the illusion -- er, I mean, convince the judges -- that these programs are amateur in nature and that the players aren't being exploited.

The fall of amateurism as the NCAA knows it

Mark Emmert's testimony showed that amateurism is nothing more than whatever the institution in power decides it is.

The fall of amateurism as the NCAA knows it

Emmert took the stand Thursday. As part of this testimony, he maintained that college players are truly amateurs, and that a court ruling in their favor would destroy that status, converting college sports into pro sports. The problem with that, according to Emmert:

"To convert college sports into professional sports would be tantamount to converting it into minor league sports. And we know that in the U.S., minor league sports aren't very successful either for fan support or for the fan experience."

Now, whatever your opinion on the merits of the court case, Emmert’s statement that minor league sports "aren’t very successful" is, to put it diplomatically, factually inaccurate, at least when it comes to minor league baseball. More than 41 million people attended minor league baseball games last year. As Pat O’Connor, president and CEO of Minor League Baseball helpfully reminds us, more people attended minor league baseball games than attended NFL, NBA, NHL or MLS games last year. The period from 2004 to 2008 was marked by particularly strong attendance, with yearly increases resulting in a new all-time minor league attendance record every year. Expansion and modernization of ballparks also reflected this strength: 49 new parks were built between 2000 and 2009. That's nothing compared to the $5 billion in facilities construction currently being undertaken by college athletic departments, but it does suggest the health of the minor leagues within their own financial sphere.

The crippling world recession of 2008/09 halted this growth, but the minor leagues weathered the storm. Indeed, while Major League Baseball in 2009 suffered a 6.9 percent attendance decline, the minor leagues fell just 2.9 percent.  Despite a still-sluggish national economy, minor league baseball has rebounded and attendance has resumed an upward pace, with 41,553,781 fans attending minor league games last year, about 250,000 more than 2012. New ballpark construction has resumed as well, with three new stadiums entering service in 2013. 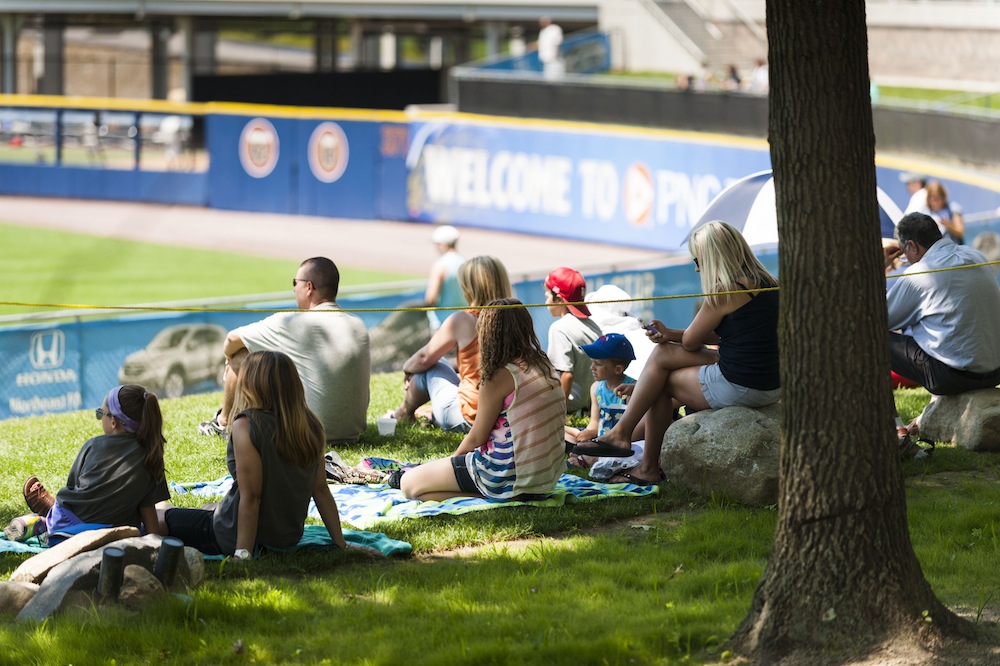 Direct comparisons between the minor leagues and NCAA product are only of limited value here in the sense that last year, the five domestic Triple- and Double-A leagues alone played more than 4,500 games. NCAA Division I-FBS men's football teams played just 835 games but were outdrawn by the minors by only 41.6 million to 38.1 million. Add in Division I-FCS totals, and the minors lead 44.4 million (1,561 games) to 41.6 million. Clearly, on a per-game basis college football is a larger draw. That wasn't Emmert's point, but rather that the minors "aren't very successful... for fan support." While they may not be supported on the same level, with top teams drawing 8,000 or 9,000 fans per game on average last year as opposed to the nearly 46,000 per game drawn on average by NCAA Division I-FBS teams, the cumulative weight of that support cannot be simply ignored or dismissed.

Ironically, Dr. Emmert's own argument about attendance may serve to undermine his position that the NCAA is presenting something other than professional-level sporting events: Last season, just four major league baseball teams averaged 40,000 or more fans per game, while the NFL's worst-attended team, the Oakland Raiders, was outdrawn on a per-game basis by some 41 college football teams. Three teams (Michigan, Ohio State and Alabama) more than doubled them.

The Oakland Raiders were outdrawn on a per-game basis by some 41 college football teams. Three teams (Michigan, Ohio State and Alabama) more than doubled them.

College basketball also outdrew the minors on a per-game basis. The Big Ten Conference alone averaged nearly 14,000 fans per game. All three NCAA divisions totaled approximately 32.5 million, according to the NCAA. In Division I baseball, the top 10 teams ran from LSU at almost 11,000 per game to Louisiana-Lafayette at 3,671 per game, and drops off rapidly from there. The 2013 College World Series, the collegiate game's showcase event, set a record with 341,483 fans attending the various games, averaging 24,392 per contest.

The point here is not that baseball's minor leagues are competitive with NCAA sports, because when it comes to the top teams clearly they are not. They are, however, successful on their own merits. As for structural elements of the minor leagues that limit their appeal on a competitive basis -- the ability for their parent teams to make the best players vanish to the big leagues or a higher level in the middle of a pennant race -- there is no reason that an NCAA that paid its athletes would have to conform to the same model, or would be automatically converted to it.

However, a shift to a model that emphasized player development over competition would almost certainly benefit the athletes involved. Yes, that would come at the expense of NCAA interest, but again, that underscores why collegiate players should be paid -- in the minor leagues, winning is important, but not at the expense of furnishing players to the majors. In college baseball, coaches think nothing of pushing top pitching prospects over 130 pitches, and there is no reason not to assume the same win-at-all-costs mentality doesn't apply in other collegiate games.

What about the "fan experience?"

Well I suppose that is a matter of taste, but minor league games are certainly more affordable for the average family than many college sports venues. Most minor league franchises are heavily involved in family-friendly fan activities and promotions, often fun and creative promotions. The Lake County Captains in the Midwest League, for example, are hosting the "Mark Emmert Fan Appreciation Night" on July 2.

From the Captains' press release:

Is two-plus years enough to evaluate a GM who was in charge of a rebuilding/reloading project? No, but these moves sure didn't help Josh Byrnes out.

Bring back Tony Gwynn & the lost greats of the 80s

A remembrance of the past, a wish not to go back but to be back, and for others to be back as well. Also the only post where you'll see Pascual Perez compared to a character from Shakespeare.

All fans who attend the game and do nothing but stay until the third inning will receive credit towards a future Captains game of their choice. In addition to this great benefit of just showing up, given the recent ruling in college athletics that will allow student athletes the opportunity to enjoy consuming food as they need it, four lucky college students will win an All-You-Can-Eat wristband and tickets to a future Captains game.

During the game, fans will be permitted to move from their seat location designated by their ticket, subject to a one inning waiting period, if they desire a different view.

Lucky participants who take part in the Captains in-game promotions will not be rewarded for their efforts, rather, they will have the satisfaction of just having the opportunity to participate. At the end of the game, a promotional participant will be crowned that evening's BCS (Big Captains Superstar) Champion via a subjective vote taken by members of the media and a computerized scoring algorithm.

The Captains considered offering complimentary tickets to any local student-athlete for the July 2 Mark Emmert Fan Appreciation Night, however, due to regulations related to their amateur status, all local college students who show their college ID at the Classic Park Box Office will instead receive a $2 discount.

The Captains say that Dr. Emmert is invited.

Dr. Emmert is obviously a busy man. He could use an evening at the ballpark to relax.