Is this the beginning of the end for Verlander, or are we jumping the gun by ignoring a logical source of his struggles?

Share All sharing options for: Is Justin Verlander declining or just recovering?

Justin Verlander's swift and unexpected decline can be described with one of several narratives. It is yet another cautionary tale of a pitcher who throws too many innings early in his career; it shows us what happens when a pitcher who relies on velocity fails to adjust once that velocity starts to taper with age; it is further proof that long-term contracts are never worth their dollar amount, and should be avoided whenever possible (note: does not apply to the New York Yankees).

Yet, maybe we're jumping the gun a bit. At 31 years old, Verlander had just under 1,800 big-league innings under his belt coming into the season, a total that ranks just inside the top 30 for pitchers his age since 1980 and ninth since the 1994-1995 strike years. Four pitchers -- CC Sabathia, Javier Vazquez, Mark Buehrle, and Jon Garland -- were all over 2,000 by that point in their careers. Add in that Verlander has never had a significant arm injury as a pro and it doesn't make sense that a pitcher with fewer than 2,000 career frames would suddenly go from a perennial Cy Young candidate to one with an ERA+ of 86.

Yet, maybe he isn't healthy. During the offseason, Verlander suffered an injury while training that later required "core muscle repair surgery." This nomenclature is uncommon and vague. While many will automatically assume that "core" means a sports hernia injury, this may not necessarily be the case. Sports hernias are often incurred due to activities that require high impact twisting, such as a baseball pitcher's delivery. The injury involves a tearing or shearing of the lower portion of the oblique muscles near the rim of the pelvic bone, making twisting and turning very difficult. The high torque levels that Verlander creates with his delivery require strong obliques, so it makes sense that weakness in this area would lead to problems with his pitching mechanics.

So, if we had to define a "core," how would we? It would probably encompass any of the four abdominal muscles or the hip adductors, or "groin" muscles. Damage to the rectus abdominis (the "six pack" muscle) near the base of the pubic bone would not be classified as a true "sports hernia" but would present with similar symptoms. Twisting would not be as difficult with damage to this area, but his high leg kick may be problematic. He could have also damaged one of the hip adductors, which would also fall under the grab-all term "core muscle." Again, Verlander's high leg kick and/or push off (if his right leg were the one affected) could be impacted.

Regardless, the question here is whether Verlander's surgery is a possible cause for his slump in 2014. His timetable suggests that this could be the case. Verlander had surgery on January 9 and pitched in his first spring training game on March 11, less than nine weeks later. His start on Opening Day was just 81 days after his operation.

While this is a reasonable timetable for getting back to normal everyday activities, Verlander's high-impact profession may have required a bit more recovery time. He reported being pain-free every step of the way through his rehab and attenuated spring training, and odds are the Tigers' medical staff would not have cleared him to return to action if his strength were still lacking. However, his stamina may be an issue. 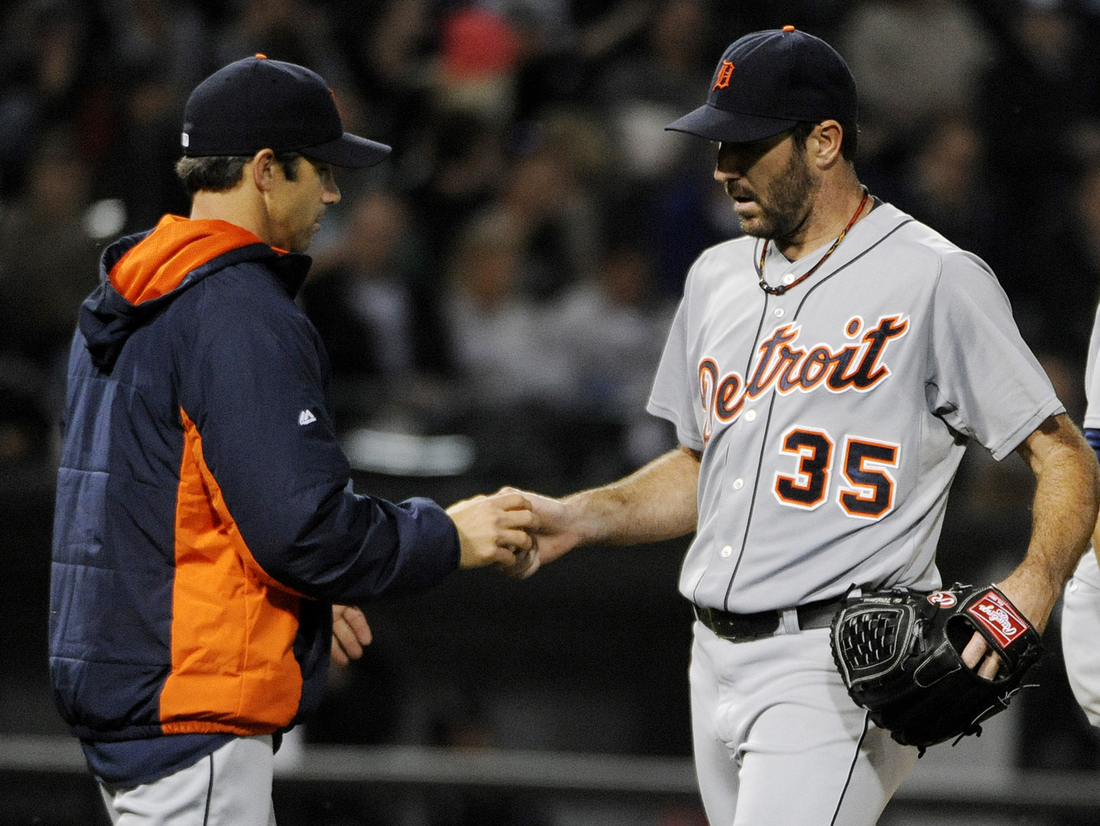 Throughout his career, Verlander's numbers have shown little variation as his pitch count elevates. He has allowed a .679 OPS to opposing batters in his first 25 pitches of a start, and a .715 OPS from pitches 76 through 100. When his pitch count gets into triple digits, opposing batters are limited to just a .646 OPS in a not-so-small sample of 899 plate appearances.

Verlander has been lauded for his good mechanics throughout his career, using a high leg kick to generate good momentum that places as little stress on his right arm as one can expect given his velocity. He also utilizes a strong core to generate trunk rotation, which helps increase power during the delivery. This is referred to by pitching experts as "torque," and Verlander is one of the best in the business. It is this reliance on his legs and core that may be the reason for Verlander's struggles. His strength may be back to normal, but the muscular endurance that allows him to repeat his delivery 100-plus times per outing could still be lacking.

Bring back Tony Gwynn & the lost greats of the 80s

A remembrance of the past, a wish not to go back but to be back, and for others to be back as well. Also the only post where you'll see Pascual Perez compared to a character from Shakespeare.

This year a .500 team could win the World Series

The major-league standings are collapsing in on themselves, though with baseball's expanded playoffs it may not matter.

Bring back Tony Gwynn & the lost greats of the 80s This year a .500 team could win the World Series

One of the most popular topics of conversation about Verlander's recent performance is his drop in fastball velocity. However, there are too many factors at play to accurately determine whether this is related to the offseason surgery. Verlander has tailed back on his velocity early in games in recent seasons, ramping up to the high-90s when necessary in later innings. He dealt with mechanical issues in 2013 that were presumably unrelated to any sort of injury. His velocity has gotten better in June, but this does not necessarily mean that he is getting stronger or in better shape.

The pitching motion involves so many moving parts that the core is constantly active, both for stabilization and for trunk rotation. He obviously isn't having any pain with the motion, but his strength and endurance don't seem to be at 100 percent. When starting his actual pitching motion, the step through seems nice and fluid, but a lack of strength/endurance in his abdominals and/or groin would result in a slight delay in trunk rotation and, subsequently, the follow-through of his right shoulder/arm. This could throw off his command, which has been a big problem for Verlander this season.

While Verlander's last outing was a step in the right direction, the fact remains that his performance has dropped off considerably with fatigue in 2014. This is not something that he has dealt with in the past, indicating that his offseason surgery may be the main reason for his poor first half. He should improve as the season goes on, though we may not see "vintage Verlander" until late in the year, if at all in 2014. As for 2015 and beyond? Don't count out the Tigers' ace yet.