There was a fracas between the Orioles and A's over the weekend. Let's look for unwritten rules and assign blame.

Let us talk about the written and unwritten rules invoked over the weekend series between the Oakland Athletics and the Baltimore Orioles. There were a lot of them.

A primer of what happened, for the unaware: Manny Machado took offense to what he perceived as a rough Josh Donaldson tag on Friday. Donaldson was hit with a pitch later in the game. On Sunday, Machado hit Derek Norris with his backswing twice, with the second occurrence knocking Norris out of the game. The A's didn't like the callousness of Machado, and reliever Fernando Abad tried (and failed) to hit him twice. In response, Machado helicoptered his bat out to third base.

Hear me out. This was almost certainly the worst transgression of the bunch, at least from an ethical or potential-for-harm standpoint. And here we are talking about unwritten rules, when I'm pretty sure this isn't an unwritten rule. 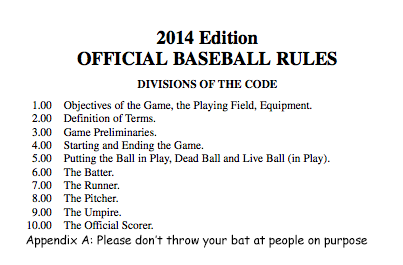 Yeah, there it is right there. But while Machado's transgression might be the worst, his reaction was the one that made the most sense. Maybe not the severity of the reaction, but after getting thrown at twice, I'm sure all of us would have a little "Well, screw you, pal" in us. We would all express it in different ways. Machado's was to play whoopsiedoodle with his bat, which is ... a pretty unconventional and awful way to express yourself on a baseball field. Still, as a reaction, it at least makes sense on a human-nature level.

Two things you want to avoid here: First, don't be that person who assumes that this is irrefutable proof that Machado is a bad egg and will grow up to be a bad chicken. Sometimes an isolated incident is just an isolated incident. Bert Campaneris was a six-time All-Star who did this in the 1972 ALCS:

He was also a 30-year-old man, so he didn't have the folly of youth to use as an excuse. This did not say much about the type of person Campaneris was, nor did it inform us all about the type of person he would be in the future. It was a guy taking offense to the potential for bodily harm and responding with the thing in his hands. Really, I'm surprised this doesn't happen all the time.

The second thing you want to avoid is the impulse to dismiss the bat-chucking entirely. Campaneris' bat throwing was an isolated incident, but this was a warning sign:

The people who thought that Delmon Young's personality was going to get in the way of his talent were right. Because, really, who throws a bat at people?

It's worth noting that Machado's bat toss wasn't as violent as either one of those two. It was more of a middle finger than an assault. It was probably the worst thing on the field this weekend, but at least you could understand the rationale if you squinted.

3. Throwing at Machado for not feeling bad about his backswing

You made this up, A's. Some post-fracas quotes:

Let Grant Brisbee guide you through the silly world of people being offended about baseball things.

"Those backswings, OK, that stuff does happen, and the guy who did it is always like, ‘Hey, are you all right?’ It’s always like that," Jaso said. "When people aren’t aware or don’t even care about that etiquette a lesson needs to be taught there. … That little bit of camaraderie, that sportsmanship, needs to be there."

That's not an unwritten rule. "Caring" is not an unwritten rule. You threw at Machado because you think he's a twit. An unlikeable, petulant twit who hurt your player. I suppose if he pretended to be deeply concerned, the A's would have let it go, but if he expressed mild concern, I'm pretty sure the A's would have been ticked off, regardless. It's kind of like that Internet meme about people you don't like and crackers. The A's were already annoyed at Machado and then he knocked their catcher out of the game. That's the punishable offense, and they were going to respond. Caring about caring is a silly excuse.

Look at Manny Machado act like an absolute dillweed here:

Donaldson's reaction is perfect, just perfect. It was a tag. It was a part of the written rules.

The only appropriate response was to laugh. What was Donaldson supposed to do, risk missing the tag because he's scared of bruising Machado? Have you seen Machado? He's kind of a monster. If he came up in the '50s, he'd have a nickname like Garguantua or Monstro or something. Instead, he's just the size of a regular ol' baseball player. The point is that he can probably handle an aggressive tag. Except that wasn't even an aggressive tag. He was just being weird and overly sensitive.

Also, I wonder if Machado thought Donaldson was out at third when he chucked the bat in that direction. It was Eric Sogard. Whoops. Plus, Sogard was wearing a Cloak of Epic Resistance (+6 or higher resistance bonus), so the bat wasn't even going to hurt him.

Edit: Sogard came in for Donaldson, but played second, with Alberto Callaspo shifting to third. I'm keeping the joke in there, though, because it works on so many levels. And all of those levels are about Sogard wearing glasses.

1. Throwing at Donaldson after the tag

Here it is, the stupidest thing of the weekend. It was dumber than overreacting to a normal tag and sillier than throwing a bat in someone's general direction. The Orioles had to know Machado was being a dillweed when it came to the tag, that it was completely ludicrous to think Donaldson was doing anything out of the ordinary.

Someone still thought, well, this is our guy, and he's mad, so let's settle this by throwing a rock-hard projectile at that guy.

Miss the MLB Draft? Lucky you we covered the whole thing.

It's the silliest kind of unwritten rule. At least when teams are winging balls back and forth at each other, there's an element of deterrence there. "Don't hit our guy with a baseball, it's dangerous! And to prove that point, let me do the same thing." Hitting Donaldson wasn't retaliating for anything that could have hurt Machado. It was a knee-jerk reaction, almost jingoistic. Defending a silly response on the grounds of he's our guy is even sillier than the initial response.

Really, we're talking about this because of the bat toss. But how is tossing a bat worse than tossing a baseball? Potential for harm? Don't know, the impact site of a baseball bat might be a little larger than that of a baseball, but it's also traveling much, much slower. The Orioles didn't hit Donaldson in the head, but Machado didn't hit Sogard in the head, either.

The difference is that we're used to players using baseballs as weapons, whereas flying bats are odd to us. I'm not sure that's as big of distinction as we think. As long as it's not being wielded as an in-hand weapon, it's probably no more dangerous than a baseball being thrown at someone expecting a pitch down the middle.

It's also possible that the ball just got away from Wei-Yin Chen. But that's no fun. There was silliness in Baltimore over the weekend, and not a lot of it made sense. At least we could laugh at it and the parties involved.