10 players who won't be dealt at MLB's trade deadline

A bunch of players will change teams before the trade deadline. But not these guys.

Share All sharing options for: 10 players who won't be dealt at MLB's trade deadline

It's July, and the rumor mill is yet again up and running. It's worth remembering that the vast majority of rumors you are going to hear are utterly worthless. Some of them are flat out false and laughable on their face. Many more quickly become irrelevant. After all, it does us no good to know the A's were connected to David Price before they acquired Jeff Samardzija and Jason Hammel, and it's useless to (hypothetically) know the Yankees are interested in Jorge de la Rosa before he's dealt to the Orioles. There can, after all, only be one winner in each trade deadline sweepstakes. The value of these extraneous scoops is essentially nil.

Nevertheless, we will collect these rumors and speculations and connections with gusto over the next three weeks. We will search through tweets and interviews like they're leaves to try and figure out how teams will be preparing themselves for a run at the postseason. We will look for signs of the future to come, and we will believe far too much of it. After all, as Vernon Wells and Alfonso Soriano prove, it's possible to move damn near anybody.

That said, I'm not going to pay attention to any of the rumors surrounding the following players, all of whom simply seem too entrenched to move.

With a short term replacement on hand in Darin Ruf, you would think the Phillies would love to move their former franchise first baseman, who has struggled to hit .226/.306/.383 this year. But Howard is 34, a bad defender, is injury prone, can't hit lefties, and is still owed $60 million even after the season is done.

Teams that could use a first baseman or DH, but who aren't crazy enough to touch Howard: Reds, Marlins, Brewers, Pirates, Mariners. 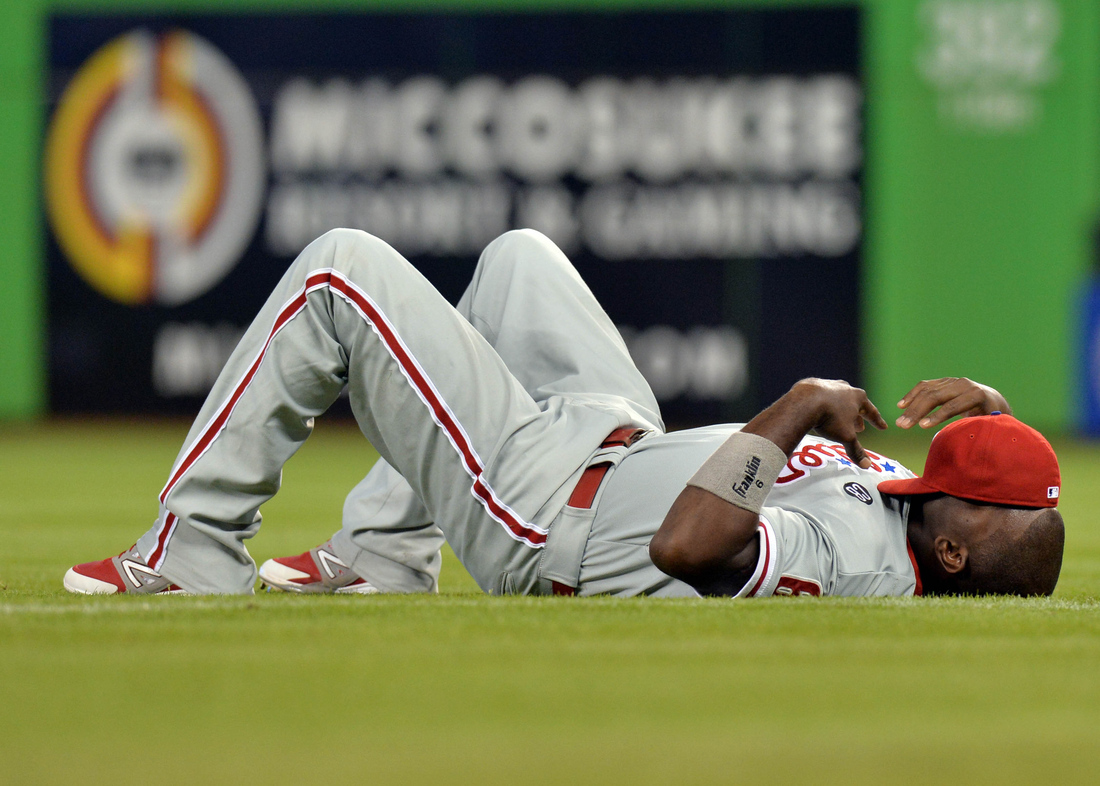 Barney had a great joke the other day about all the turnover on the North Side:

Darwin Barney on all the turnover in #Cubs clubhouse: "My wife's the only one left from 2011."

He's likely to stick around a while too, given that he's hit .224/.261/.316. Despite being possibly the best defensive second baseman in the game, the simple and sad truth is that Barney isn't actually an upgrade for anyone in contention.

This seems ridiculous since Headley has been on the block forever. It's because of this that we shouldn't listen to anything about him until he's finally gone. Back when he was actually good, the Padres were reportedly asking for the moon for him. Now, Headley is hitting just .225/.300/.341. With a confused front office situation in San Diego, can the Padres even get close to value for him at this point? Headley seems like the kind of player that you keep, give the qualifying offer to this offseason, and hope he walks away. If he doesn't, you probably have a good third baseman. If you do, you get a draft pick that's possibly worth more than Headley will fetch on the open market, and which can be chosen by the new General Manager next year.

Teams that want a third baseman, but not enough to pony up for Headley: Blue Jays, Yankees, Royals, Braves.

The Rockies aren't going anywhere and everyone wants Troy Tulowitzki. That everyone, however, includes the Rockies, who seem inclined to hold on to their superstar, who is hitting .350/.441/.616 and is leading the universe in WAR. They fear the bad P.R. should they deal their best player in the middle of his best season, which is somewhat understandable. Still, Tulowitzki has played more than 140 games just three times in his eight-plus years in the league and is owed another $118 million through 2020, so buyers should beware anyway.

The Twins love Kurt Suzuki, who is unexpectedly hitting .303/.358/.394 and made the All-Star team. Their pitchers hate throwing to Josmil Pinto, the heir apparent who was jettisoned to the International League to work on his game calling and receiving skills. Don't be surprised if the Twins try to re-sign him to an extension through at least the end of 2016 that they'll probably regret later.

Teams that could use a catcher, especially one with a better defensive reputation than the numbers seem to warrant: Orioles, Dodgers, Cardinals

Trade deadline would be cool if more teams lose

We need more teams to lose. Or win, even. Do something and commit to it, baseball.

Would you rather be the Rangers or Astros?

The two Texas teams are at a crossroads. Which one would you rather helm for the foreseeable future?

Trade deadline would be cool if more teams lose Would you rather be the Rangers or Astros?

Apparently the Rockies really want to keep as much of their crappy team together as they can. Good luck with that strategy. Also Cuddyer has been hurt and is unlikely to make enough of an impact in his time back to generate enough interest.

Teams that could use a Michael Cuddyer but won't be allowed to get him: Mariners, Orioles, Royals, Reds.

Rios's option for next year makes this a toss-up. The Rangers have been absolutely destroyed by injuries this year. If they believe Prince Fielder, Jurrickson Profar, Martin Perez, Tanner Scheppers, Matt Harrison, and Derek Holland can come back healthy and strong in 2015, it's worth keeping Rios on another year. They're far more likely to do that than to trade Rios and Adrian Beltre when they're both still under contract for next season.

Teams that need a corner outfielder who can maybe still play center should the Rangers decide to throw in the towel on 2015: all of the same teams interested in Cuddyer, Cardinals, Blue Jays.

In center field, he's a bad defender, and he doesn't hit nearly enough (.235/.300/.366 this year) to play a corner. His baserunning is poor and he strikes out a lot. Most of the contenders already have an Alejandro De Aza running around in either the International or Pacific Coast Leagues.

Teams that should try to do better than Alejandro De Aza: See De Above.

Designated hitters need to do better than .230/.252/.319. Morales was signed to give the Minnesota offense a spark, and instead he's burned it down and killed his market for the offseason. Plus, as a DH, he only would work for half the teams anyway, further limiting his possible landing spots.

Our own Over the Monster has been covering this all season, but essentially, because Lackey missed time thanks to Tommy John surgery in 2012, the Sox get to have Lackey for the league minimum next year if they want to. What's more likely is that the Sox use their leverage to sign Lackey to a below market two or three-year contract before the start of next year, when they will presumably want to be contending again.

Teams who wish they could have a top-40 major league starter for the minimum: The same teams interested in Troy Tulowitzki.