Off the bat, out of the park, off the stratosphere, into the parking lot, off the windshield ... or do you just wanna take the "H"?

Joey Gallo has the kind of power that seems out of place everywhere but in the pages of a Gabriel Garcia Marquez novel. It's magical to spectators and very real for pitchers, but since he's still in the minors, much of that power hasn't been observed on paper ... until now.

See where these people are coming in? Gallo hit one there. pic.twitter.com/3bL5GuqLy5

People are taking photos of the broken windshield like it is a shrine. Maybe it should be in Texas one day. pic.twitter.com/QpxH21YS8i

To further illustrate how insane that home run was, take a look at the aerial view. 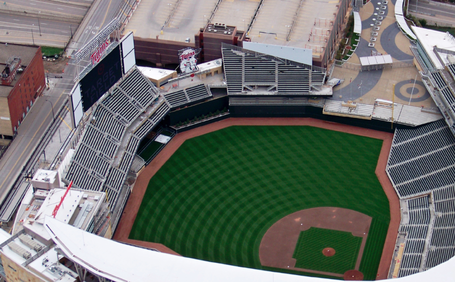 You see the entrance to the right field bleachers? That's where the ball landed ... and it didn't barely get there. It hit a windshield are enough to smash a decent-sized hole in it.

Gallo might be playing in the Futures Game today, but if he keeps doing stuff like that, he'll be a fan favorite in the majors very soon.