MLB's All-Star Game is amazing and you should love it

Stop complaining about the All-Star Game. It's the biggest and best party of the summer, and everybody's (eventually) invited.

Share All sharing options for: MLB's All-Star Game is amazing and you should love it

I'm an almost 36-year-old man who still loves the All-Star Game. While you shift uncomfortably in your seats and wonder why I still haven't outgrown my attachment to a glorified exhibition, I'm actually giddy at the thought of Felix Hernandez facing Giancarlo Stanton and Clayton Kershaw against Mike Trout. Yes, I know that interleague play has taken a lot of the romance and spectacle out of these matchups, but I don't care. Every summer the greatest collection of players in the world shows up on one field, and I'm not going to apologize for being excited about it. It's like baseball's version of a party at Gatsby's house.

The introductions are always the best part, with the players splayed out down the baselines, and the starters announced as they exit the dugout. Every player gets a brief moment in the sun to himself, Pat Neshek for a moment is every bit as important as Adam Wainwright. I remember being young and marveling at the names the public address announcers rattled off. George Brett, Kirby Puckett, Barry Larkin, Alan Trammell, Don Mattingly. These were the reserves? Good Lord. Imagine the starters. Some kid is going to think the same thing about Jose Abreu, Jose Altuve, and Freddie Freeman.

The music tends to suck, but the music always sucks at parties. It's not supposed to be listened to; it's to keep us dancing.

Only one thing bothers me about the All Star Game, and that's all the whining. "Garrett Richards deserves to go!" "Rafael Soriano feels snubbed!" "Derek Jeter is awful now, he can't hold a candle to Erick Aybar." Ugh. Stop it. It's unseemly and you're ruining everyone's good time. Everyone is supposed to be happy at a party!

That's what the All Star Game should be: a harmless good time. It is, after all, a popularity contest as much as anything, meant to build up goodwill in the most casual fans. Sure, Jeter isn't playing up to his usual standards, but he won his starting spot handily because fans wanted to see him. Having recognizable faces (and, in Jeter's case, a baseball deity) prominently on display is comforting and exciting. Moreover, Jeter's presence, in particular, lends additional drama to the contest, as he appears in his final Midsummer Classic. 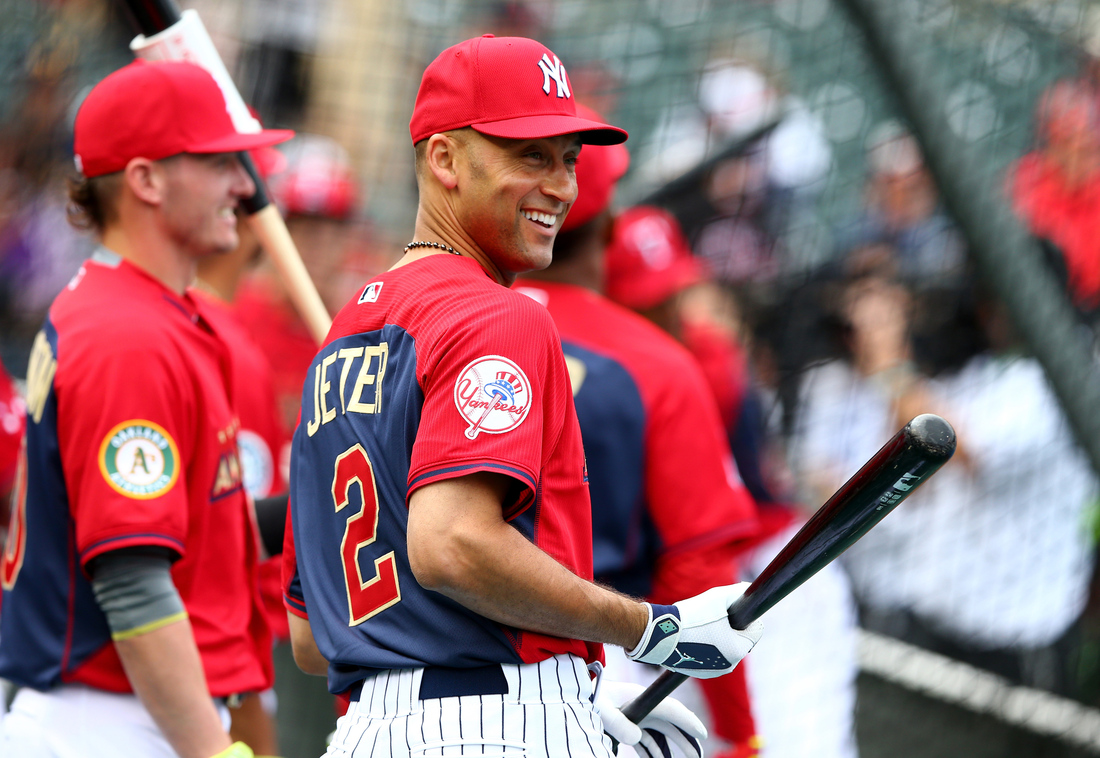 The best part about this party is how inclusive it is. Damn near everyone is actually invited (well, except for Jeff Samardzija and, for some reason, Richards). Soriano may be all mopey he didn't make the first cut and will hang out in the Dominican Republic for four days: he won't be missed. While the rosters are theoretically limited to 32 players on each side, the actual number of all-stars is much higher. Between injuries and pitchers who have pitched too recently, frankly, damn near everyone who deserves to be there (and who wants to) will be there. So far, 694 players have either made 100 or more plate appearances or pitched 30 or more innings in 2014. Of those 81 are currently listed as All-Stars before we even factor in the "fan vote" winners. That's over almost 12 percent of the relevant players in the league, and up two from last year, when 79 players got to claim they made the squad. With rosters that bloated, players who can't crack the team really shouldn't.

MLB is rewarding the players, sure, but punishing the millions who want to see as much of them as they can.

The All-Star Game is a celebration of the game as it exists today. It's supposed to be a happy occasion! Let's not bicker and argue about who was picked over someone else. Let's not focus on who feels screwed. Let's instead appreciate the magnitude of the talent in the game and the diversity of its superstars. Let's give thanks that, for all the arms that have fallen off this year, there are still more than enough to fill out two all-star staffs with arms to spare. Let's be glad that every team, no matter how disappointing they've been, has players to take pride in who deservedly walk in the company of other giants (and also Giants). The All-Star Game may just be a big, dumb, four-day party in the middle of summer, but parties are supposed to be fun, at least until the cops show up, we hop over the fence, and we wake up the next morning with no pants and have to explain to our boss why we're late for the second half of the season to start.