J.D. Martinez, the Tigers' steal of the offseason

When the lowly Astros had no room for J.D. Martinez, the Tigers quickly scooped him up. Since then, the 26-year-old outfielder has made himself a centerpiece in a World Series contender's lineup.

Share All sharing options for: J.D. Martinez, the Tigers' steal of the offseason

"Batting cleanup for the Tigers, J.D. Martinez." The first question you ask yourself is, wait, don't they mean Victor Martinez? American League All-Star. Twenty-one home runs before the break. OPS of nearly 1000. One of the best batters in the AL this year. Victor Martinez. His name is Victor. How do you mess that up?

But no, they mean J.D. You may remember him as an Astro, but let's face it: you probably don't. In Houston he was forgettable even on a team of placeholders. Once touted for his power and ranked the organization's sixth-best prospect by Baseball America, Martinez lived up to little of his potential. Low average, doesn't walk, can't run, and questionable in the field doesn't make for a must-have in an organization still a few years from dominance, and Martinez became a didn't-keep at the end of this year's spring training season. As Astros GM Jeff Luhnow put it, Martinez was a victim of the Astros' success. But, no, "victim" isn't the right word now. Beneficiary. That's that's the word.

The second question you might ask yourself is, what was Luhnow thinking? Even if Martinez had no long-term future in the organization, wouldn't it have made sense to see if he had some value? Martinez didn't just change his swing during the offseason. "He blew the whole thing up," Evan Drellich of the Houston Chronicle wrote in February. Diagnosing his own issue -- his bat just wasn't in the zone long enough -- he watched video of former teammate Jason Castro and 2011 NL MVP Ryan Braun as well as combing the Internet and rebuilt his swing. "I changed everything," Martinez told Drellich. "From my hands to my feet, my leg kick, my stride, my load -- just everything."

The differences in his swing from 2013 to 2014 are easy to see. Before the alterations, he had no real leg kick at all and turned his hips quite a bit before the swing. The entire process seems slow.

After the changes, everything is moving forward, in sync and with purpose:

The changes to the swing worked, and Martinez batted .312 in Venezuela's winter league with a .570 slugging average. He received just 18 at-bats during spring training.

On March 23, the day of his release, Martinez told Drillich, "Everything happens for a reason." On March 24, Martinez signed a minor league deal with the Tigers, a team in need of power after trading Prince Fielder in the offseason. On April 19, Martinez hit four home runs with the Tigers' Triple-A affiliate during a double-header. And on April 21, Martinez was back in the big leagues. Finally, on June 30 with Victor Martinez resting a sore back, J.D. Martinez found himself in the cleanup spot, protecting Miguel Cabrera.

In the 2½ months since joining the Tigers, Martinez has made the Astros look silly and the Tigers look like charlatans. At the All-Star break Martinez is batting .346 with a .380 on-base percentage and .654 slugging built on 17 doubles, a triple and 13 home runs in 55 games. His strikeout rate hasn't really changed, but he's hitting more line drives and fewer grounders than in past seasons, and he's taking more walks than in any year but 2012. A heat map detailing runs above average per 100 pitches shows that there are no real holes opposing pitchers have found -- yet, sample size being small still -- in the remade swing. 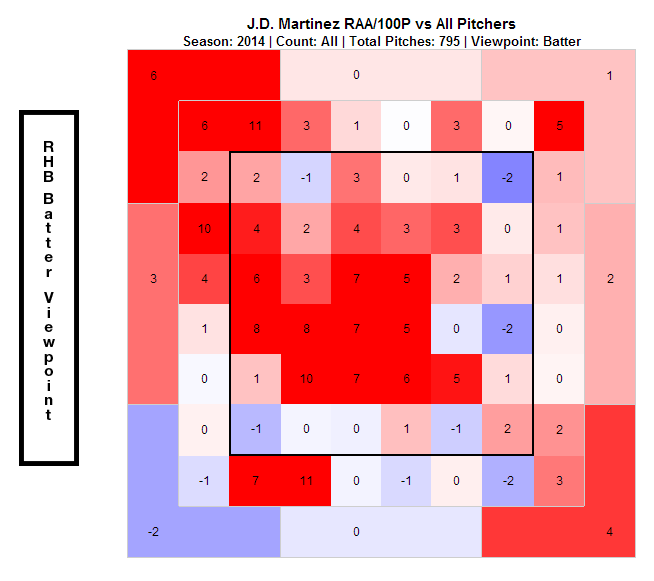 Martinez will fade a bit -- probably. His .383 batting average on balls in play is noticeably higher than the expected BABIP based on his batted ball types -- around .320. Martinez has nearly doubled his career home run per fly ball rate to 23 percent  this season. Only time will tell how much of that is a product of the swing change and how much of that should be expected to regress.

He may never be Victor Martinez, but if J.D. keeps this up, you won't be questioning who that Unknown Martinez is batting cleanup in a contender's lineup. With J.D. Martinez enjoying a breakout year just as he becomes arbitration eligible, there's one thing we can say for certain: Being released by the Astros was the best career advancement he could have asked for.