You can groove a pitch. But you can't talk about grooving the pitch.

Share All sharing options for: Why Adam Wainwright's grooved pitch to Derek Jeter was a big deal

Jeff Passan had the tweet retweeted around the world:

Adam Wainwright admitted he grooved a fastball to Derek Jeter in the first: "I was gonna give him a couple pipe shots. He deserved it."

People had opinions, the kind of instant I've-thought-about-this-for-five-seconds opinions that the Internet is best at. Wainwright left his media obligations thinking he'd just made a bevy of harmless, one-day-at-a-time-110-percent comments, but quickly found himself rolling his words into a tortilla and wolfing them down.

He did it well. He called himself an idiot and refused to blame the media. He said it was an attempt at humor, but he borked it. This was not Exxon, waiting weeks to apologize and admit wrongdoing. This was also not Exxon because, cripes, it's baseball. Point is, Wainwright owned it and diffused it. I'm willing to believe he was kidding, and everything spiralled out of control.

I've tweeted stupid things, thinking I'm funny and forgetting I'm not. Horrible, offensive jokes that seemed better in my head. The only thing worse than outrage is indifference. Luckily, no one really cares what I think. I've never been in the middle of a Jeter-scented tempest like Wainwright just was, and I don't envy him.

Let's pretend he wasn't kidding, though.

Pretend it wasn't Wainwright, but a nameless pitcher. Pretend it's someone you like or don't like, doesn't matter. Let's talk about a pitcher intentionally throwing a meatball in an All-Star Game to a retiring legend, then admitting he did it. Hey, look at this pitch:

Things Chan Ho Park didn't say: Of course I threw him a first-pitch fastball. I'm not that bad. I'm literally in the All-Star Game. I'm one of the best pitchers in the world, I can only make a pitch that terrible if I try.

Everyone was fine with it. Everyone is still fine with it. Even if we suspect that Park grooved one -- and not everyone's on board with that idea -- there's suspension of disbelief mixed with the truism that it's still really, really hard to hit a baseball. Larry Granillo wrote a great piece years ago about Denny McLain grooving Mickey Mantle's second-to-last home run, and it featured this quote from a 1968 issue of Time:

"Be sure to tell Denny thanks," said Mantle afterward. "Thanks for what?" asked McLain when he got the message. Then he grinned broadly and added: "I make mistakes all the time."

Even then, even with McLain being one of the seedier creeps of his generation, there was still a wink-wink agreement. No one wants to hear about a grooved pitch, even if we want to watch a grooved pitch in the right situation. It might be the biggest semantical difference in baseball. Why, it's ... it's ... an unwritten rule.

When Barry Bonds played his last game for the Giants -- and eventually ever, dammit -- the Giants were down 9-2. With two outs and nobody on, Jake Peavy fell behind in the count, 2-0. The next pitch was a fastball down the middle. Bonds hit a laser right to the center fielder, and his career was over.

I wanted to try to give Barry his bit of due," said Peavy, who allowed the left-handed hitter's 700th homer here on Sept. 17, 2004, an opposite-field shot into the left-center bleachers. "I certainly have the utmost respect for Barry, and I was trying to let him have his swings.

Bruce Bochy knew what was up:

"I think Jake pretty much knew that was Barry's last at-bat and he went after him with his best fastball," Giants manager Bruce Bochy said. "He got the ball up on a 2-0 count. When Barry first hit it, I thought he hit enough of it."

I was there. I wanted that ball to go out. I'm not sure how many things I've wanted more in a baseball game. The thrill off the crack of the bat was intoxicating; the out deflating. I gave, and continue to give, exactly zero shits if Peavy purposely threw a pitch he thought Bonds could handle. Here's the difference:

I was gonna give him a couple pipe shots

I was trying to let him have his swings

Goodness, there is hardly any difference between those two. Except there's all the difference. The first one connotes feebleness, as if the pitcher is doing a favor for a helpless player. The second one is more of a friendly dare. Here's my fastball. Hit it if you're so great, ha ha. 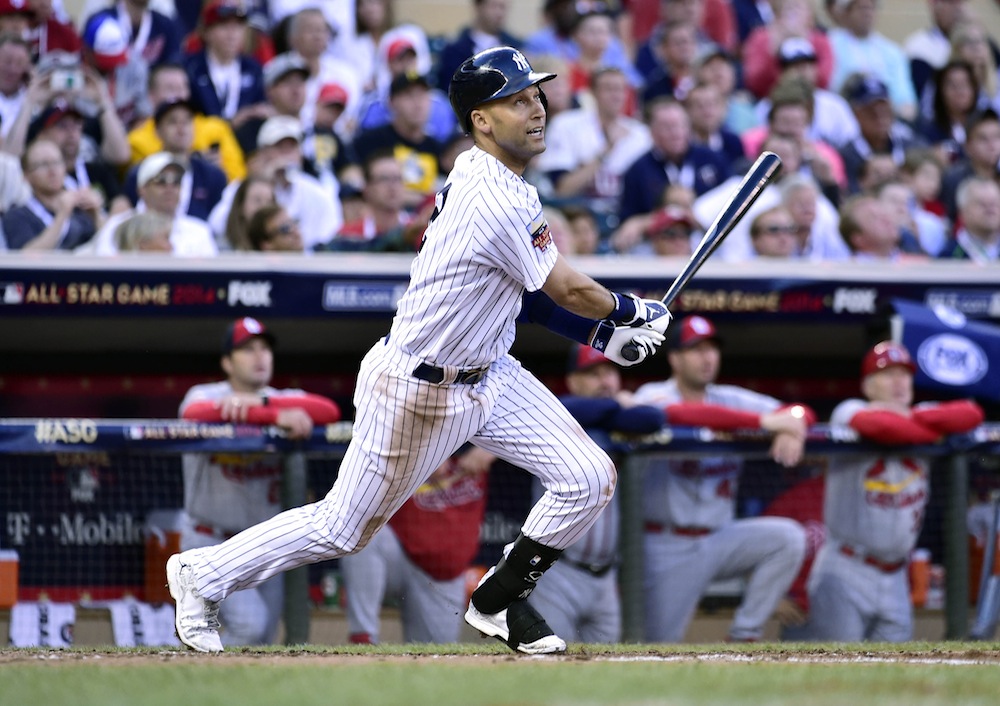 Even if Wainwright wasn't kidding, even if he was fully intending to throw the sloppiest of meatballs and did it, there's no way he meant the first one. He knew the tradition, even if he'd never heard of the tradition. He wanted Jeter to have his swings, to not get cheated, to take his rips, to rise to the challenge, to ... pick a euphemism. And we're okay with that, always.

He wanted Jeter to have his swings, to not get cheated, to take his rips, to rise to the challenge. And we're okay with that, always.

The problem wasn't that the game was responsible for home-field advantage in the World Series because no one cares about that. Mike Matheny replaced Andrew McCutchen with Charlie Blackmon, Jonathan Lucroy with Devin Mesoraco, and Clayton Kershaw with Alfredo Simon. If this game really, truly meant something, Kershaw would have started and gone nine innings. It doesn't, and he didn't.

The outrage existed because there was just a little too much truth (we thought) behind the quote. With just a smidgen of unwelcome truth -- the semantics of "pipe shots" vs. "let him have his swings" -- some fans freaked out. It seems silly, but so do most of the unwritten rules. This unwritten rule, though, makes a little sense. We want the theater, but we don't want to see the stagehands. It was a slip of the tongue that Wainwright admitted he wanted back. Be a sport and give it back to him.

Down with pipe shots. Up with throwing a fastball and letting destiny take over after that. Just make sure you call it what we're all expecting. Even better, don't call it anything at all.