The Astros look like they're screwing two young amateur players out of a chance to start their pro careers. Are they?

Pompeia was the second wife of Julius Caesar, a good woman by all accounts who he's purported to have cared for very deeply. When hosting a ladies only religious festival, however, a young man managed to disguise himself as a lady and sneak in. Like damn near everyone who runs onto the field at a ballgame, however, he was caught and prosecuted for sacrilege. While there was nothing to indicate that Pompeia had done anything wrong, the festival was ruined and she was blamed. Caesar divorced her, giving us the famous proverb "Caesar's wife must be above suspicion."

It's a proverb that's absolutely true. When one piece of an institution is tainted by scandal, people have a tendency to lose trust in the entire system. Without wanting to get into politics, look at how the Veteran's Administration is currently under fire. Certainly not every VA hospital and clinic was affected by the corruption and fraud that left so many veterans untreated for so long, but Americans are rightly suspicious and understandably want to know how deeply the cracks run through what should be one of the strongest and most robust federal programs. In spite of all the well-meaning, decent and effective nurses, doctors, and administrators who work there, the trust is gone, and it will take decades to repair.

Anonymous quotes from somebody "in the know" indicate that the Astros are not trying to manipulate a draft system, and that first-overall draft pick Brady Aiken actually has a serious flaw with his elbow.

Public sentiment has turned on the Astros. Hard.

All of which is a long way to say that what the Astros seem to be doing with first overall pick Brady Aiken looks awfully sketchy. That's not to say that it is sketchy, mind you. To recap, Aiken was taken over a month ago with the first overall selection in the 2014 MLB draft, the slot value of which is $7.9 million. The Astros negotiated a $6.5 million bonus with Aiken pending a physical, saving money on their budget that they could use elsewhere. However, that physical apparently turned up a "significant abnormality" in the high schooler's elbow, according to Fox's Ken Rosenthal, and this abnormality has spooked the Houston brass into pulling that offer, leading to a less lucrative $5 deal on the table for the prospect.

Casey Close, Aiken's advisor, however, has been clear in saying that Aiken isn't injured and that is "asymptomatic." "Brady," Close told Rosenthal, "has been seen by some of the most experienced and respected orthopedic arm specialists in the country, and all of those doctors have acknowledged that he's not injured and that he's ready to start his professional career."

Speaking of Close, he's in an uncomfortable position. If the Astros get Aiken to sign, they have room in their MLB-imposed draft spending cap to sign Jacob Nix, another high school pitcher who is advised by Close, and 21st round pick Mac Marshall. Nix and the Astros apparently already had a deal in place for $1.5 million, but without Aiken, Houston can't fit under the artificial limit imposed by the draft budget because they would lose the $7.9 million allocated to Aiken's spot. Were they to go over budget by more than five percent -- a possibility if Aiken walks -- they have to forfeit a future draft pick. 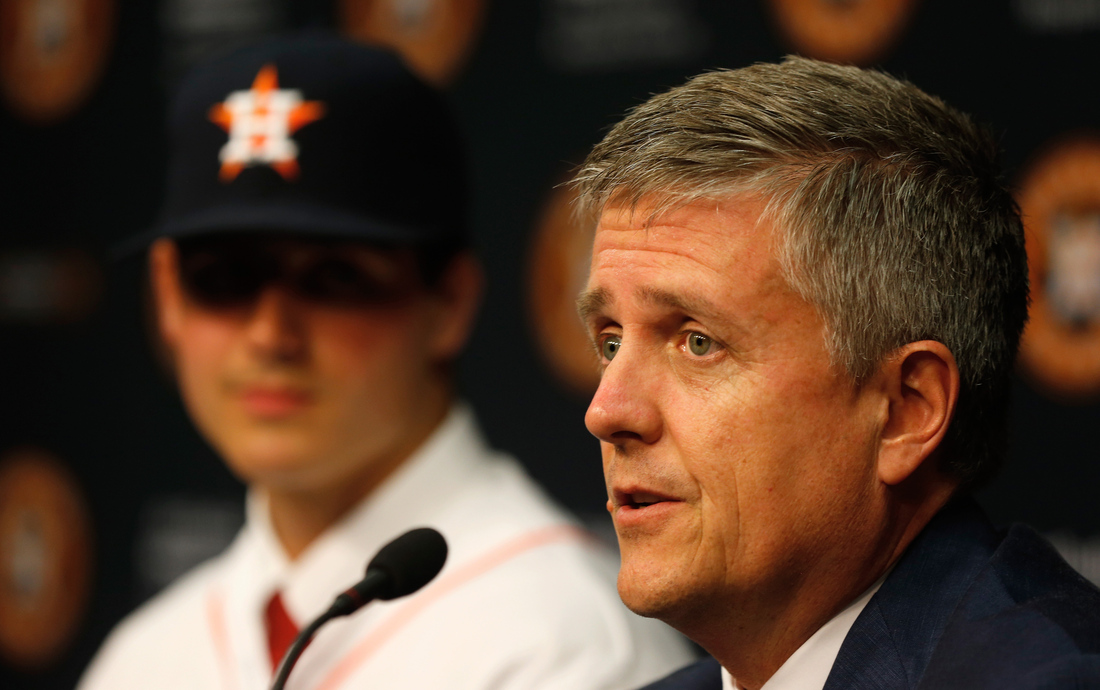 So even after agreeing to terms, the Astros have rescinded the offer to Nix, which the MLB Player's Association is regarding as a violation of the rules. All of this has to be worked out by Friday, or Aiken and Nix will go off to college, and the Astros will have squandered the number one overall pick. They would have the second overall pick next year as compensation for failing to sign Aiken, but at the cost of this year's first should they exceed that five percent overage, which the agreement with Nix would cause.

Ignoring Tony Gwynn, MLB fails not him, but itself

The lack of a tribute to the fallen Hall of Famer It's not about what's right, it's about understanding the power of memory in baseball.

Why Wainwright's grooved Jeter pitch is a big deal

You can groove a pitch. But you can't talk about grooving the pitch.

Ignoring Tony Gwynn, MLB fails not him, but itself Why Wainwright's grooved Jeter pitch is a big deal

If all of this seems confusing and ridiculous to you, don't worry. You're not alone. We suffer from a distinct lack of information. For instance, we have no idea what the "abnormality" in Aiken's elbow is unless this sourced report about a UCL issue turns out to be true, or how it affects his risk of developing an arm injury. The Astros may be absolutely correct to insist on a lower bonus. In fact, given how carefully Close chooses his words when he's discussing the pitcher's condition, and the fact that they would have had room for Nix under Aiken's already under-slot initial $6.5 million deal, there's a good chance that they are. It's certainly their right under the current collective bargaining agreement. It's also possible, however, that this is an attempt to game the draft to collect extra talent, something the Astros have been especially good at over the last couple seasons.

We also don't know what their specific agreement was with Nix. They had reportedly agreed to a price, and the pitcher had passed his physical. We don't, however, know if Nix signed anything or if a verbal commitment is enforceable. Certainly, he is a victim in this, given that his future is now tied to Aiken and he's poised to lose the bonus he earned.

The only clear villain in all of this is the collective bargaining agreement, negotiated by the league and by the player's association, which destroyed the bargaining power of amateur players like Aiken and Nix by creating this artificial ceiling. The only recourse for them, if they won't take less than they think they're worth, is to go back to school for three years (unless they go to a junior college for a season, as some draftees have done) and risk being overused by their college coaches and potentially suffering a career threatening arm injury. Sure, maybe the Astros pulling back their agreement with Nix isn't legal, but what is he going to do if he wants to play in the majors? Sue the league that still might pay him millions of dollars next year, and for decades to come? Amateurs' power was stripped by a league and a union that didn't even pretend to represent their interests, and now Nix's worth is tied to Aiken's, with Casey Close in stuck in the middle.

It also makes the Astros, at least from the outside, look awfully suspicious, as Scout.com's Kiley McDaniel noted on Twitter:

This is consistent with what rival orgs don't like about the Astros. Traditional types perceive smart strategic moves as cold & calculating.

Not saying that's right or wrong but this is the risk you accept when you're rocking the boat. Lose the margin for error in personnel moves.

We don't know what HOU's intention was w/Aiken. Could be 100% moral medical concern after done deal, but appears to most to be questionable.

Aiken's elbow issue comes at an incredibly fortuitous time, and potentially allows them to save money while acquiring more players. Meanwhile, as they dicker over money, they're willing to hang another young man out to dry who seems to have earned his bonus and would like to start his professional career. Houston has been lauded by statheads for the job they've done rebuilding a crumbling organization. Jeff Lunhow and his staff are rock stars of analytics, and are open and approachable on social media. They have built up an incredible amount of good will since taking charge of the Astros. Now, however, they appear to be trying to screw two young amateurs who are technically required to represent themselves in any negotiations with the team that drafted them. They look like bullies and unethical opportunists. Suddenly, they're no longer above reproach and their integrity is stained. This is what the new CBA, where interest in young players mostly has to do with keeping their earnings down, has done to them, and what it will continue to do to the league until this systematic problem is fixed.