In ignoring Tony Gwynn, Major League Baseball failed to understand its own appeal

The lack of a tribute to the fallen Hall of Famer It's not about what's right, it's about understanding the power of memory in baseball.

Share All sharing options for: In ignoring Tony Gwynn, Major League Baseball failed to understand its own appeal

Major League Baseball and its television partners are allies the way the United States and the Soviet Union were allies in World War II: They had a mutual interest in the same outcome but simultaneously had highly divergent goals. MLB and Fox or ESPN have identical interest in wanting to see game broadcasts do well, because directly or indirectly they will both profit by that. They do not necessarily have the same goals. Among Baseball's goals, we hope, is to burnish the game and honor its memory. The networks don't need to have that goal, or any goal save that which will bring more eyeballs to its broadcasts.

Baseball has an obligation to itself and to its own memory. Television has no commitments to Baseball as a product except insofar as how it affects the program of the moment.

That explains why Fox did not bother to make any reference to the recently deceased Hall of Famer Tony Gwynn or the similarly departed grand old man of the game Don Zimmer during the All-Star Game broadcast. At the risk of repetition, this is not about Fox, about Gwynn's or Zimmer's family's being snubbed, or any obligation that MLB had to mention them out of some sense of decorum. For us on the outside, MLB is a sport or an entertainment product. For those inside the walls, it's a business, and we should probably offer prayers to Babe Ruth in Heaven or whoever is looking out for us that the players aren't branded up like NASCAR drivers by now.

For its part, Fox protests that it did air a Gwynn tribute, just off to the side somewhere:

For everyone who missed the Tony Gwynn feature #ASG @FOXSports1 http://t.co/P0W8wqkRYz

Again, swell. This isn't about Fox's obligations to care about Gwynn. Back-dooring a tribute to him by putting it on an ancillary network isn't particularly generous given the sheer length of the actual broadcast, but that's their call. They put on a 4.5-hour broadcast and 20 seconds to acknowledge a Hall of Famer doesn't seem like too much to ask, not when even ESPN remembered Gwynn during the Home Run Derby, far from the singles and doubles hitter's signature event, but Fox knows its product. This is about what memory means to the game and how Major League Baseball can sometimes be self-defeating in what is, if you want to be really cynical about things, what is basically marketing.

The lack of comment on Zimmer was noted on Tuesday night but undoubtedly was met with less consternation than the absence of a Gwynn tribute. Zimmer, despite his longevity, was a minor figure and his being overlooked is understandable; in 10 or 20 years, few will remember him. That statement will offend some, but one need only look at how much of the baseball memory is devoted to (say) Art Fletcher, who played on four World Series teams and then coached on every pennant-winning Yankees team from 1927 to 1945, or Frank Crosetti, who played or coached for every Yankees pennant winner from 1932 until 1964, was a coach for the 1969 Seattle Pilots, immortalized by Jim Bouton in Ball Four, and the AL West-winning 1970 Minnesota Twins. No one cares about failed managers and coaches. Still, Zimmer was an All-Star, loved baseball, baseball fans came to love Zimmer during his Yankees years if not before, and Major League Baseball should have cared enough about both to give him a moment if only because that is the currency on which the game survives

There is far less question that the same applies to Tony Gwynn, except exponentially more. At this point there's little more to say about Gwynn that wasn't said when he passed away on June 16. You know the stats. You know how people felt about him. He was a 15-time All-Star. Derek Jeter was a great player in his day, and will always be a great player when viewed in retrospect, but somewhere amidst all of the well-deserved fawning there should have been a moment to pay tribute to a fallen Hall of Famer.

After the game, Fox Sports 1, did a countdown of their top-10 All-Star Game moments. Their No. 1 moment came in 1999 at Fenway Park. That event was more notable for being Ted Williams' effective farewell to baseball than to anything that happened after. Who was next to Teddy Ballgame the entire time? Who helped direct the nearly blind Williams to throw his ceremonial first pitch to home plate? Tony Gwynn. Somehow it was missed that he was nearly as central to the video, in terms of his literal presence, as was the aged Splinter. 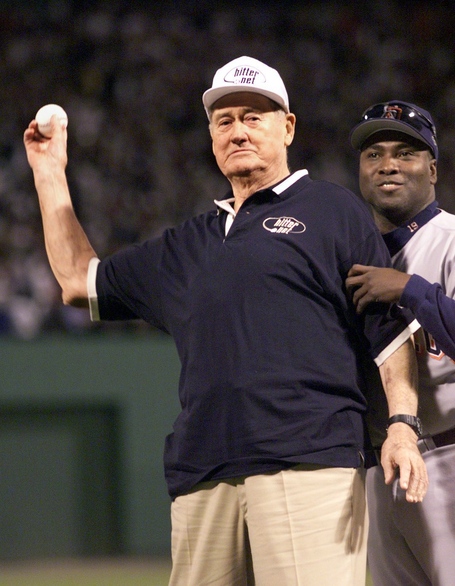 Again, that was postgame coverage, after midnight in the East, on a supplemental network. As for the game itself, as for Joe Buck, Harold Reynolds, Ken Rosenthal, and the rest of the nattering commentators on hand? Nothing, at least not during the game when a national audience might have heard it. If the words "Tony Gwynn" were said in a meaningful way between 7:30 pm and 12 am on the East Coast, they slipped by without a ripple.

Baseball's legacy of achievement is part of its appeal. Context is everything. Derek Jeter is a comment on every shortstop before him, and every shortstop that came before him is a comment on Derek Jeter. That's how we know he's great and exactly how great he is. The same goes for Tony Gwynn and his place in history. If you look at the similarity scores offered on Baseball-Reference.com, a way of identifying like players, they both have very low numbers (Gwynn's; Jeter's) the system's way of saying that there has never been anyone like them. Whether you know it through the numbers, seeing them play, or just hearing people talk about them, these are facts that MLB, that people who claim to care about the game like Bud Selig, should desperately want you to remember. Without them there is no context, and without context, baseball has no life.

It sounds morbid, but the dead are always with us in baseball. Babe Ruth still casts a long shadow, and Lou Gehrig, and Satchel Paige, and Jackie Robinson, and, for decades to come, Tony Gwynn. Again, it's not the network's job to remind you of that. Derek Jeter is now, and now is what sells for them. It was on Major League Baseball to remind Fox of Baseball's needs, and that Baseball forgot to do.

After the game had ended, the San Diego Padres tweeted this picture:

They remembered Gwynn, were waiting for Gwynn, because it mattered to them. A baseball team, part of Major League Baseball, protested that omission because they cared enough to look for it, and while Joe Average fan might not have been anticipating it in the same way, he might have appreciated it had it been presented to him. Over time, much lip-service has been paid to the idea that love of the game is passed from father to son, and today one assumes it also travels from fathers and mothers to daughters as well, or fathers and fathers to sons, or any other possible permutation of family. That's swell, but it also travels by means of lineage: Tony Gwynn to Derek Jeter to Mike Trout.

Two-thirds of that was acknowledged last night, the other third was missing. Again, there was no obligation to do so, and whether or not it was the right thing to do is almost beside the point. It would have been the smart thing, the knowing thing. As a company, Fox deserves all the grief it gets, but this one is on Baseball.