The Mariners seem to be driving the trade-deadline discussion as we careen towards the deadline.

With the All-Star break over, the trade talk around baseball should heat up with less than two weeks before the deadline. Some notes on what to expect:

Though they currently appear to be focused on their pursuit of David Price and Ben Zobrist, the Mariners still would like to add a right-handed outfield bat before the deadline. As Jon Heyman of CBSSports.com reported on Thursday, the team is considering Josh Willingham (Twins) and Dayan Viciedo (White Sox), and they will forever be linked to Marlon Byrd, who the Phillies will try to trade if they decide to be sellers.

5 fake deals for the looming deadline

None of them will actually happen, but at least you don't have to pay attention to your work right now.

5 fake deals for the looming deadline

An industry source notes that Byrd has not been asked to waive his no-trade clause to facilitate a deal to Seattle, meaning nothing is imminent on that front. That lines up with multiple reports over the last couple of days that note that Byrd is only willing to waive his no-trade clause if the Mariners are willing to guarantee his $8 million team option for 2016. At this point, a deal seems less likely than it did a week ago, when the teams were said to be in serious discussions about a trade.

As they sit four games behind the Orioles in the AL East race, the Blue Jays are expected to be aggressive buyers at the July 31 trade deadline. Toronto has been said to be looking for pitching help and outfield depth, with the names of top prospects Daniel Norris, Aaron Sanchez and Dalton Pompey mentioned as possible trade chips.

As of this writing, Pompey appears to be the least likely of the team's prospects to be dealt. Sources indicate that the 21-year old outfielder is being viewed as virtually untouchable by the Jays, and that Toronto's refusal to include him in trade talks for ex-Cub Jeff Samardzija served as one of the turning points in negotiations that ultimately led to the right-hander being dealt to the Athletics. 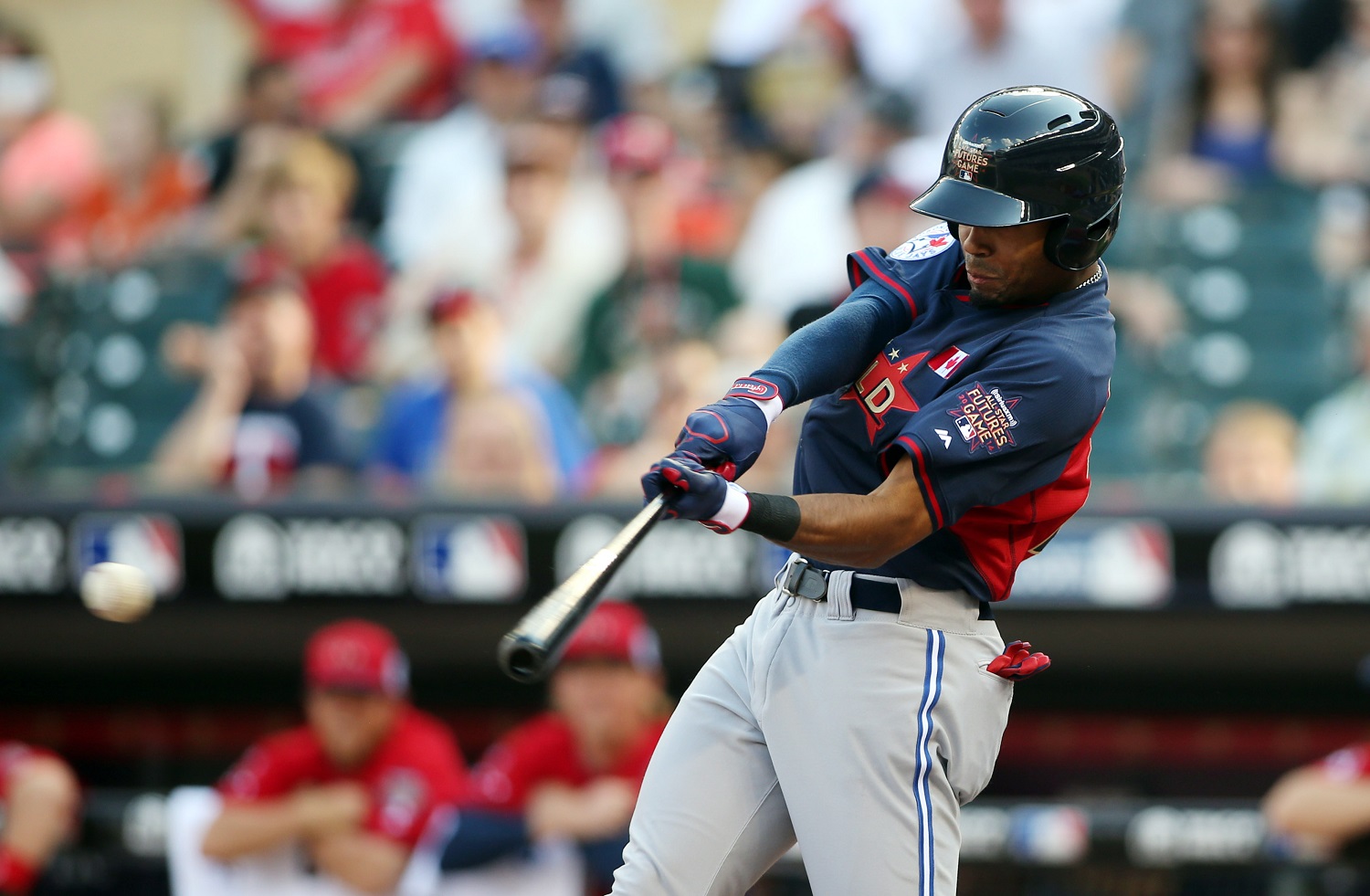 Pompey, who was recently promoted to Double-A New Hampshire, has had a breakout season, slashing .293/.376/.439 in 85 games between High-A Dunedin and Double-A New Hampshire. While he may rank behind pitchers like Norris, Sanchez and Marcus Stroman on Toronto's list of top young players, the franchise views him as a potential face of the franchise and community due to his status as a homegrown, hometown prospect. Pompey is from Mississauga, Ontario, located just 30 minutes from Toronto, meaning that the Jays may be feeling pressure from the fanbase to keep a potentially productive Canadian around.

Since losing All-Star Matt Wieters to season-ending Tommy John surgery in mid-May, the Orioles have been cycling through a three-man rotation behind the plate that includes stopgap options Steve Clevenger, Caleb Joseph, and former Padres' catcher Nick Hundley. Each backstop has left something to be desired offensively, with Clevenger hitting .240/.296/.373 in 25 games, Joseph struggling to a .147/.262/.308 line in 39 games, and Hundley at just .250/.284/.382 in 20 games despite leaving Petco Park behind. Put them all together and you have an aggregate performance of .225/.276/.345 since Wieters last played.

With three players vying for two spots on the team's roster, the O's optioned Clevenger to the minor leagues in order to delay his service clock and give Joseph and Hundley reps at the plate in an attempt to end their season-long struggles. That experiment partially ended last Saturday, when Clevenger was recalled from Triple-A Norfolk, causing Baltimore to have three catchers on their active roster.

The team is now actively trying to trade Hundley according to major league sources who say that they expect the O's to make a move behind the plate before the non-waiver deadline. Baltimore offered Hundley to the Cardinals in the wake of Yadier Molina's thumb injury, only to have their offer rejected before St. Louis claimed George Kottaras off waivers from the Indians. Word is that the Orioles prefer to have Clevenger at the major league level and could add a catcher (free agent John Buck and trade candidate Kurt Suzuki come to mind) in advance of the deadline.

The team's preference is to try to get something back for Hundley, but sending Joseph back to Triple-A may be inevitable at this point. The 28-year-old rookie has shown that he's not ready to hit major league pitching, and may not even be finished figuring out Triple-A pitching despite his age. He's a career .268/.327/.427 hitter in the minors at an age when he is what he is, so that day is unlikely ever to come.

The Phillies are expected to look to sell some of their veterans at the trade deadline, with names like Byrd, Chase Utley, Jimmy Rollins, Cliff Lee, Cole Hamels and A.J. Burnett swirling around on the rumor mill. As they look to turn aging players into high-ceiling youngsters, they may not have to look further than one of their own top prospects: third baseman Maikel Franco.

Franco, who was recently ranked by Baseball America as the 50th-best prospect in baseball, could receive a call-up to the major leagues within the next couple of weeks, according to industry sources. Despite his struggles to begin the year with Triple-A Lehigh Valley (.230/.285/.364 in 87 games), Franco is heating up to start the month of July, hitting .356/.383/.644 in his last 10 games, pointing to the Phillies possibly calling him up in the middle of a hot streak. 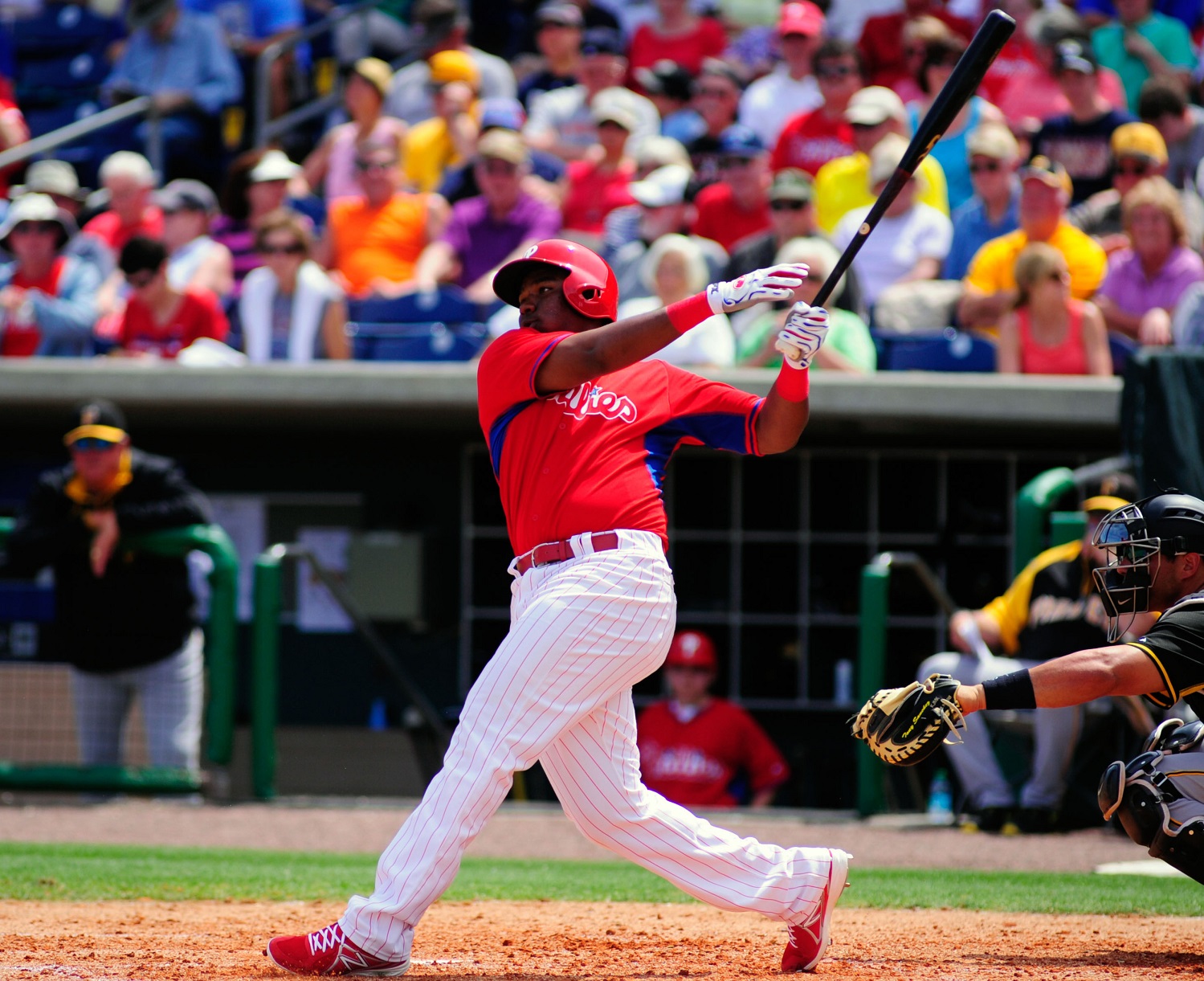 Utley offered praise for the youngster during the All-Star festivities, noting that he was impressed with him during spring training. "He had good hands at third base, a strong arm," Utley said. "He had good actions defensively. Hitting-wise, it’s hard to tell in spring training, but you can see his bat speed is there. He’s got a good idea at the plate. He’s only 20, so he’s going to improve and become more comfortable the more he plays."

With Franco possibly coming up soon, the Phillies hypothetically could look to trade Cody Asche, who has been one of their best contributors all season. If they decide to keep Asche, they could use Franco at first base in an effort to lessen the workload of Ryan Howard.