Why can David Ortiz get away with bat flips, slow trots, and showing the pitcher up? Let's investigate.

Share All sharing options for: David Ortiz, human asterisk for the unwritten rules

Here's something I'd never seen before: a player walking to first before the last pitch of an intentional unintentional walk.

Mind you, I've spent more time watching Barry Bonds take unintentional intentional walks in my life than I spent in high school, so I'd like to think I've seen the pinnacle of disdain for unintentional-intentional walk. Before Ortiz reached first, I had an e-mail asking me if this had broken an unwritten rule. Well, I don't know. Lemme see if there's an answer on the laminated flowchart I keep in my wallet: 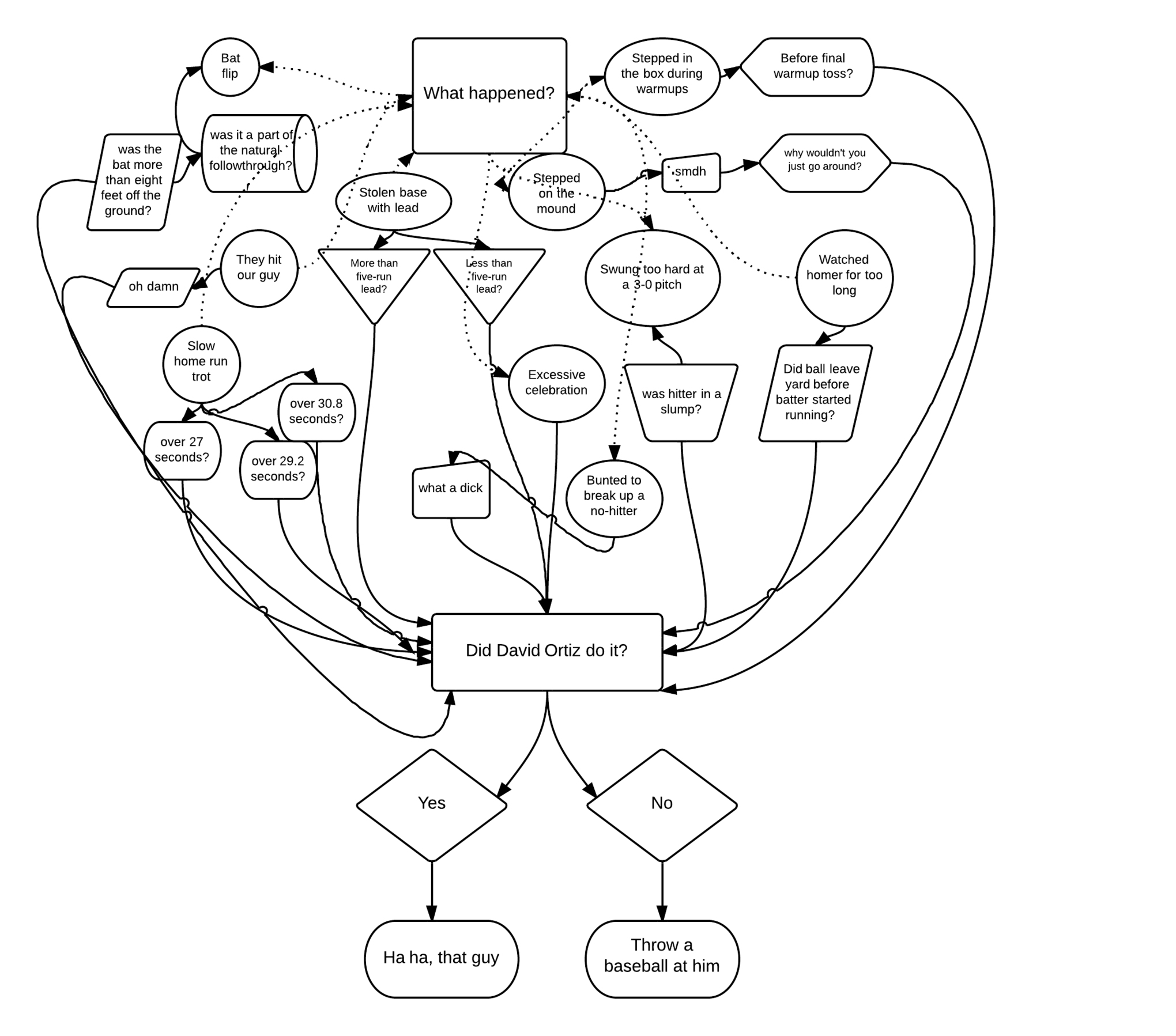 Okay, follow the line to the box, then follow that line to ... ah, says here that it doesn't matter because David Ortiz did this.

Wait, how does that work?

Not everyone agrees with this flowchart. David Price and the Rays aren't nearly as amused as the rest of us, and the left-hander has committed some All-Star-on-All-Star violence with the rock-hard projectiles at his disposal. But the main point stands: If Yasiel Puig did the stuff Ortiz does, there would be grumbly screeds from grumbly columnists. If Bryce Harper did half of the things Ortiz gets away with, he'd get drilled by a pitch before he left the on-deck circle in his next at-bat. Instead, Ortiz does things like this ...

The relevant part is around 1:10. I'd GIF the staredown and trot, except Photoshop limits me to 500 frames. I'd Vine it, but it's three seconds too long for a Vine. It's transcendent. And if anyone else did it, they'd get plunked in the next game between the two teams. Ortiz has unwritten immunity, which is almost impossible to acquire. Here's what a player needs to do:

In which we look at good players doing bad things.

Everyone wanted to throw at Barry Bonds. Few did. The star status is a big part of that.

Youngsters can't get away with this because they're sniveling punks who don't respect the game. When the elder statesmen do it, they're adding élan and flair to our lives. It's like how my parents can get away with giving my kids Coke slushies in a Cinnabon bowl, but CPS would take me away if I even joked about it. Once you get to a certain age, you've earned the right.

Be a gigantic human being

"Uh, you just keep doing your thing, there, and I'm sorry I made eye contact."

Do it every danged time, so they get numb

Joey Votto qualifies for both of the above, but if he were to pick one homer to do the Ortiz strut -- just one homer in his career -- he'd get one behind his back, at least. Because Votto doesn't do that sort of strutting, and if he did, it would likely be because he's showing the pitcher up.

Ortiz has established that he's not showing the pitcher up. He's just standing there, arms spread, inviting the world to love David Oritz as much as the world should love David Ortiz. The pitcher doesn't matter. That's an extra the agency found, and he's getting union wages.

It's not just Ortiz, though. Pitchers stopped throwing at Cody Ross after his skippy-hop-jumps because they realized that's in his DNA. Juan Uribe does jazz hands after every home run, but that's not going to stop. Establish that you're going to watch (or trot slowly, or steal with leads, or ...) early, keep doing it, and you'll eventually be fine.